Welcome to TERRAIN THURSDAY! I don’t even know if it’ll survive more than one post, but alliteration is always fun. And I want to talk about an amazing idea of Captain Spud’s. 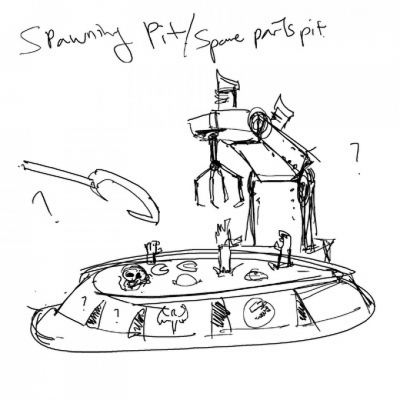 Turns out that the Colossals will be a similarly themed tournament to Wrath and Domination, only this time round they have 5″/120mm zones… Sanctuaries that are both obstructions as well as (I’m assuming) where the pitched battles will be revolving around. And Captain Spud from Lost Hemisphere had the great idea of getting THEMED sanctuaries for the factions to fight over.

That’s a great idea, and I thought of doing something similar as well, except tweaked for what I need for my LGS. Themed terrain is fine and dandy, but I don’t think I need so many obstructions. And buildings are difficult to pack in space-starved Singapore. So I’m thinking to make themed terrain that can be called obstructions (or not) for the Colossals tourney, but can also be used to pull double duty for normal and tourney play.

Like maybe the spawning/necro pit up above. It could be considered impassable, but it could just as easily be considered shallow water/deep water, considering it’s really just a pool of necrosludge and human remains. 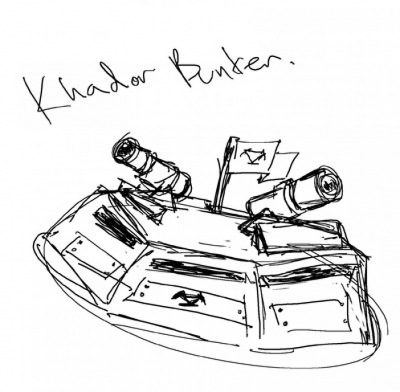 Or a more basic bunker design for the Khadorans. It’s pretty clearly a sanctuary, but it could just as easily be used to provide elevation or even cover.

The circle sacred ground is a bit different though. It’s going to be a bit delicate, but these are just sketches and options after all. I don’t know how many I’ll be making. They’re not going to be the pure unadulterated awesome of Spud’s stuff (he has a grasp on modelling I am totally amazed by), but I’m hoping they’ll be fun terrain that my players and battle over. 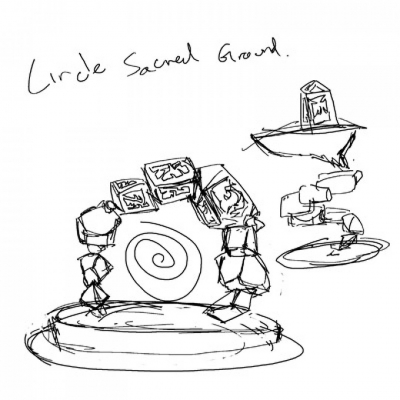 Following that (and the fact that there will probably be points given to terrain making, like in previous release tournaments), I would like to extend this challenge to all other people who are attending the Colossals tourney I’ll be running (I’m guessing sometime in August). Why don’t you make a 120mm based scenario that’s themed? It may not need to be your faction, but I’m sure that would be especially fun to make. And I might give bonus points to awesome terrain, as well as the vouchers that will also be up for grabs.

This is just a preliminary announcement (since we don’t even have colossals in yet, let alone any chance to paint or play with them), but terrain making takes some time, so I wanted to get the announcement out as early as possible. Horde players take heart; I still have the coins from last year’s Domination kit, so we have enough coins for all (I repeat again ALL… it would be a shame to have extras lying around, hint hint) hordes and warmachine factions, since they’re giving away faction coins like they did the last time to the best of faction.

I won’t be working on these any time soon (I have a trip to work on, and school to go back to), but once I have some spare time I hope to be able to get one or two of these out, and hopefully I will have some players join me. 😀