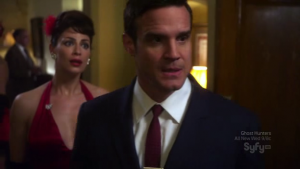 Which television series would you describe as “insanely geeky”? Well, The Big Bang Theory immediately comes to mind, with their overt use of both science-fact and science-fiction to create humour. With their domestic viewership almost doubling since their first season, it is clear that there have been way more hits than misses in the latest season.

This begs the question – can a television series be “too geeky”? At first, it seemed like the new season of Warehouse 13 was headed right down this path. Despite a strong exit in its debut season, the SyFy Original Series stumbled almost as soon as it came back, unable to maintain the momentum it had earned. With only two weeks left to go, has the downward spiral been abated? Or has the artifact-of-the-week style of episodic television truly meant the end of this once-promising series?

When Warehouse 13 heavily promoted its second episode back in July, the draw was supposed to be guest stars Sean Maher and Jewel Staite, reuniting for the first time on screen since their Firefly days as Dr. Simon Tam and Kaylee Frye. Unfortunately, they turned out to be little more than stunt casting, with the plot utterly failing to take full advantage of the good press they’ve been getting thus far. Despite my personal preference for television superheroes (Sanctuary had a very interesting take on the trope late last year), the episode never quite made sense to me.

Fast forward some two months and eight episodes later, and fortunately, Warehouse 13 has had a welcome change of pace. For two episodes, back to back, it was no longer about the artifact of the week. In fact, the artifact was not even an integral part of the story, simply a means to bring out the underlying character tensions and build on some very engaging characters. This is the true test of strength for a good television series, and I’m happy to see Warehouse 13 taking this leap of faith.

Last week’s episode “Vendetta” proved a real game-changer for the series, as we finally delved into the mysterious background of Warehouse veteran Artie (Saul Rubinek). Artie’s past has always been rather elusive, and it was important to give him some much needed depth in order to further him as a character. This episode also felt like a house-cleaning of sorts, as they burned the bridge on one character, threw another in limbo and essentially picked up new one.

Firstly, Agent Daniel Dickinson (Simon Reynolds) was killed off, which is unfortunate but not unexpected. Despite being in the opening credits in Season 1, Dickinson clearly didn’t fit in with the dynamic of the show. Fortunately, though, Dickinson’s murder worked to give the story added gravitas and provided “Vendetta” with a formidable villain, one who needed the efforts of four Warehouse agents to take down. Then, we discover that Todd, the love interest of resident tech Claudia (Allison Scagliotti), is actually on the Witness Protection Programme and needs to be relocated. In television-land, that’s essentially saying goodbye for now, do come back over the next few seasons in a guest role. Though there was a burgeoning chemistry between Claudia and Todd, it seems clear that this subplot is little more than a distraction for her character.

Finally, we are introduced to a new Regent, perhaps the most influential and authoritative member of that elusive group of higher-ups. This Regent is played to perfection by Faran Tahir, whom you may recognise from recent fan-favourite movies Iron Man and Star Trek. I’ve no doubt that this is not stunt casting, and hope that down the road, we’ll see a clash between Regents played by Tahir and perennial TV villain Mark A. Sheppard.

Most of all, however, what is making Warehouse 13 the great show it has the potential to be was demonstrated in this week’s episode, “Where and When”. Once again, the artifact-of-the-week played a peripheral role in the story, giving way to the main focus of the story –  H.G. Wells’ Time Machine. Unlike the novel, this time machine chose to uphold the laws of physics – instead of teleporting people into another time (which is physically impossible) the device taps into the psyche of people in the past and allows them to be possessed for almost a day (how’s that for trippy). Agents Pete (Eddie McClintock) and Myka (Joanne Kelly) travel back in time using the machine in order to solve the mystery of the artifact, possessing the bodies of Agents Jack and Rebecca (from last season’s episode “Burnout”).

Immediately, it’s clear what works. Without the distractions of the “artifact-of-the-week” storyline, we get a chance to further explore the dynamic between Pete and Myka, which is clearly the defining relationship of the series. “Where and When” takes the hints of romance between the two even further, but fortunately the series chose not to jump the shark so early. Establishing H.G. Wells (Jaime Murray) as a valuable asset to the team also contributes in a big way to the story. Though introduced as a potential new villain for the series, H.G. (or Helena) has yet to really reveal any antagonistic intentions, if any. I for one would definitely prefer to see more of Murray in the series – she’s gorgeous and has a talent for making her character both sympathetic and suspicious at the same time.

Though the geek references will always be a part of the show’s niche (and of SyFy’s stunt casting in general – Deep Space Nine’s Armin Shimmerman and Heroes’ David Anders make appearances in the latest episode), the writers have learnt not to let it detract from the show’s main driving force – the characters. Yes, Pete is extremely geeky, Claudia is every nerd’s dream girl and Myka does have her fleeting moments, but essentially, it is the way their characters grow which each episode that is the real draw for the viewer.