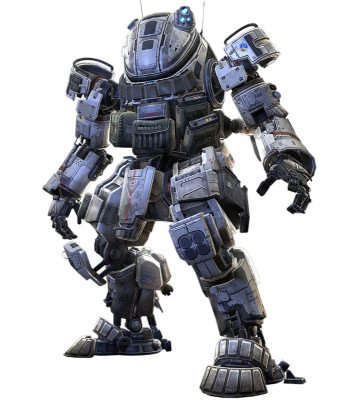 For one of my Ork Dreadknights, I took my inspiration from the Ogre Titans. I had been playing quite a bit of Titanfall in the months prior, and the heaviness and kineticism of the mechs were burned into my mind 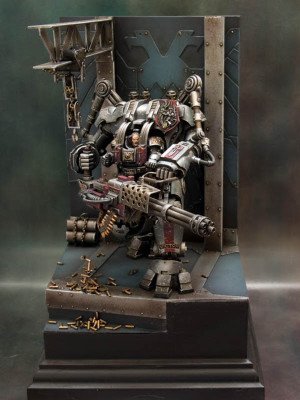 I also knew that I wanted it to be holding a two handled rifle/gun thing, and went online to find some ideas. This is Arsies’ GD entry (iirc), and it informed a lot of how I would be building the dreadknight. Three things I wanted: No ‘head’ per se, a two-handed weapon, and pouches. Bear in mind, this isn’t a copy and paste, it’s part Titanfall, part 40k aesthetic, part my own inner Ork mek taking over.

God, I love it when I go into the crazy mek kitbashing place. 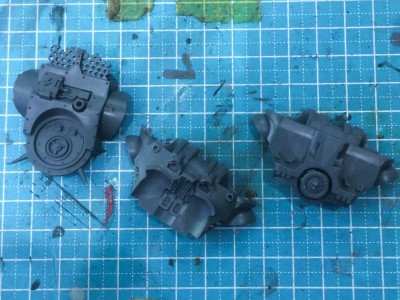 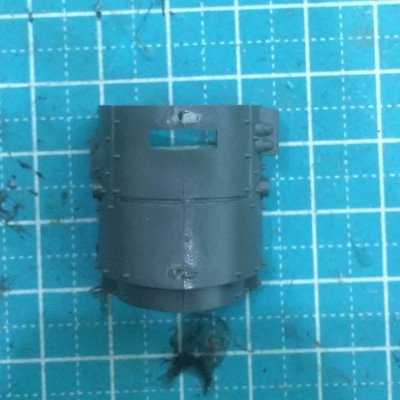 I started (as usual) by dry fitting random things onto the chassis of the Dreadknight. As luck would have it, I had a lot of killa kan and dreffdread bodies lying around; I don’t like the ‘kan’ look of the ork walkers and tend to loot other armies’ walkers (see my killa kans and deffdreads), so while I had bought killa kans and deffdreads, all I did was take the arms. So lots of bodies lying around.

The killa kans were a bit small, but the deff dread seemed to fit. Only problem being the can also had a top hatch with a lot of shoulder and extra bits that wouldn’t fit, so there was a lot of razor saw cutting, followed by greenstuff, and filing down to fit and to try to get a not-too-messy finish. (Orks can be messy, but too much green stuff might end up looking more gribbly chaos than mekky ork). 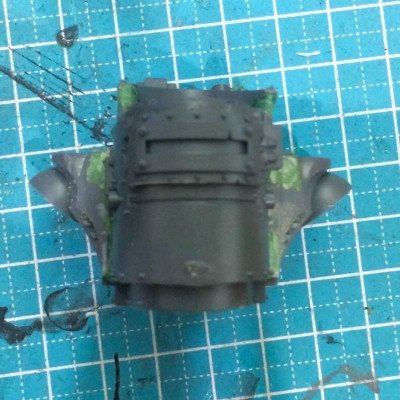 After a lot of grunt work, the deffdread and dreadknight chassis fit together as well as I could make it. 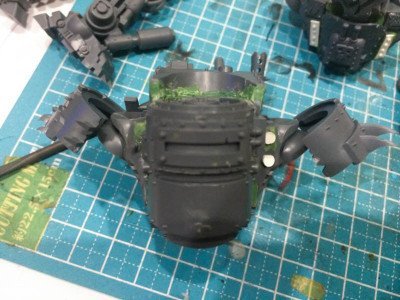 I added some deff dread shoulder plates to the shoulders, to try to mimic the titan shoulderplates. Didn’t work as well as I hope it would, but still looked cool. On to the gun.

The gatling psilencer part looked cooler than the psycannon, so I decided my Dreadknight would carry a double handed minigun. This would be a lot trickier than I thought though. 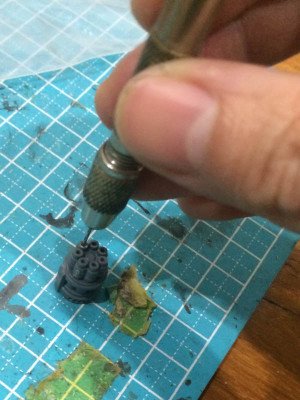 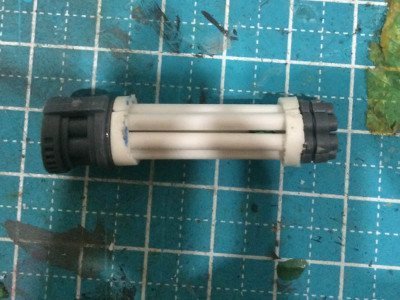 Not only did I have to align all the barrels, it needed to be (mostly) perfectly straight and level AND match up gun to end of the barrel. In order to make sure I could do that, I drilled into each of the seven barrels, drilled the corresponding spot on the gun, as well as in the middle of the guns. I then pinned (8 pins in all) using the middle pin as a center guide, and used plastic tubing to beef up the barrels.

It wasn’t perfect, so I added some more plasticard (a larger tube) as armor/heat guards on the minigun. 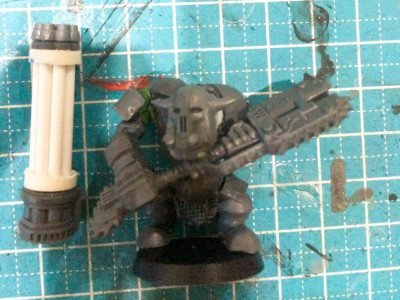 You can see how large the gun is. 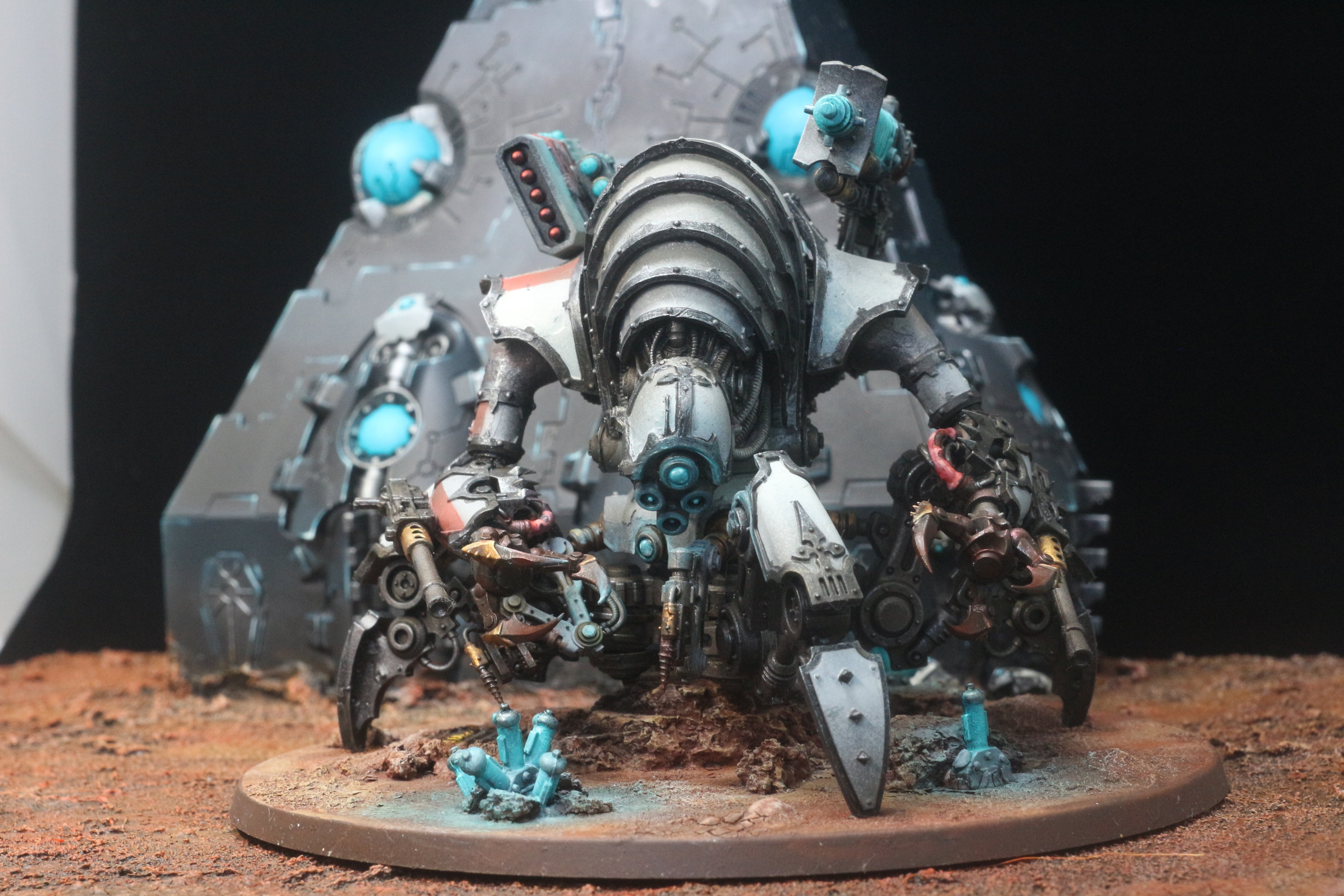