Speed worth waiting for.

The newly released video for Orks showed a new warbuggy. Technically the new warbuggies are in a board game called Speed Freeks (we know who the red and yellow cars are), but I’m sure the new buggies will be out in their own box set soon enough too.

But what if you can’t wait for new speed?

Well you kitbash your own!

Technically this is a battlewagon, but hey, it’s still an ork vehicle, innit? 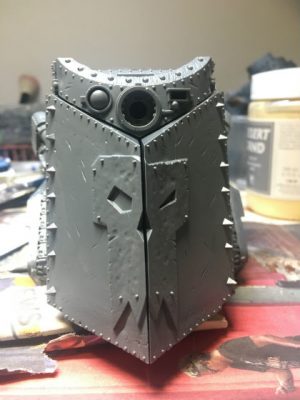 Recently, I kitbashed a morkanaut (which you will be seeing soon), but one of the bits I didn’t use was the silly oversized pot-belly. It looks silly on a robot. What it doesn’t look silly on however, is a transport vehicle.

I actually went through a lot of iterations on how to fit the morkanaut transport plow onto a battlewagon. Battlewagon wheels? Like a 16-wheeler? Unfortunately, I was so caught up in my mek crazes that I forgot to take any WIP photos. I only managed to get one when I finally slapped it together and got out of my fever dream. 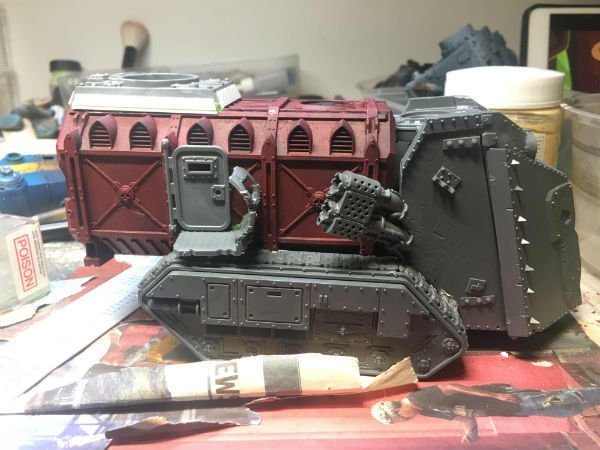 If you notice, this battlewagon is made out of three main parts: The morkanaut belly, chimera tracks, and a munitorum container. The container is second hand (thanks Russ), which is why it is already painted. I was too lazy to strip it, but it led to some problems down the line (which you will see later).

I added some other bits mainly as detailing; just to break up the flat surfaces and make it ‘read’ more like an actual ork vehicle than some bits cobbled together. (Although some people would argue that all ork vehicles are just some bits cobbled together.) Some openings for orks to emerge from, and exhausts for the engine of the battlewagon. There was however an unsightly hole above the exhaust… 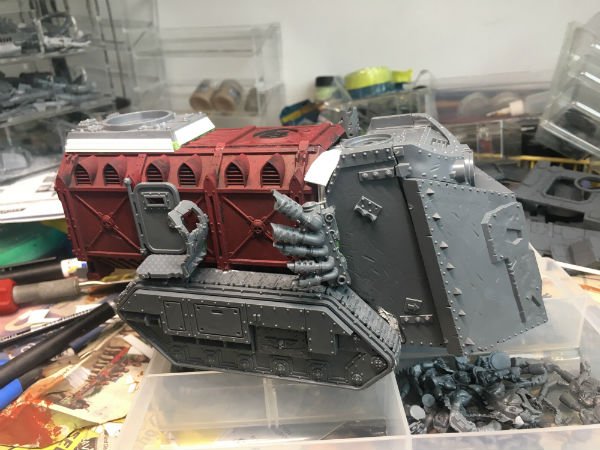 So I swapped it with a taller set of pipes, and added some plasticard to boot. 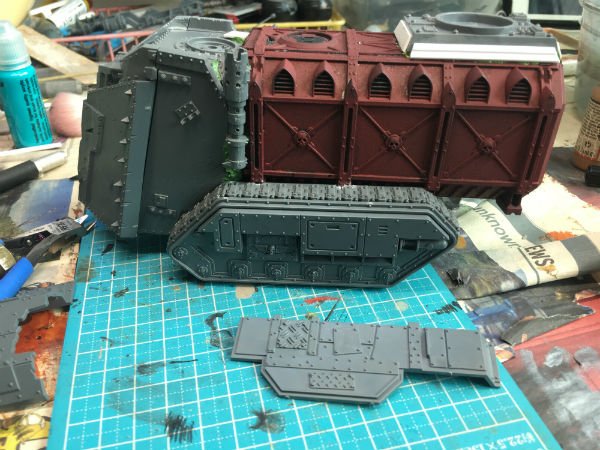 Here’s the other side of the battlewagon. I decided to add a platform in case I ever wanted to consider this thing ‘open topped’. The platform couldn’t just be superglued on. There wasn’t much contact between the platform and the crate, and the torque from handling would likely just snap it off. I’d have to pin it. 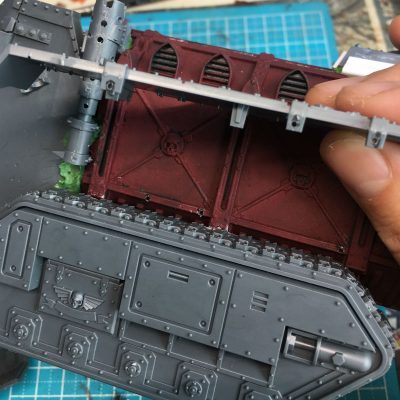 I painted a few thick dollops of paint on the platform, aligned it and pressed it against the rest of the battlewagon. I then drilled in pins to slot the platform into. I then added some greenstuff to ensure a strong hold. I’ll probably paint it like rusted welds or something. 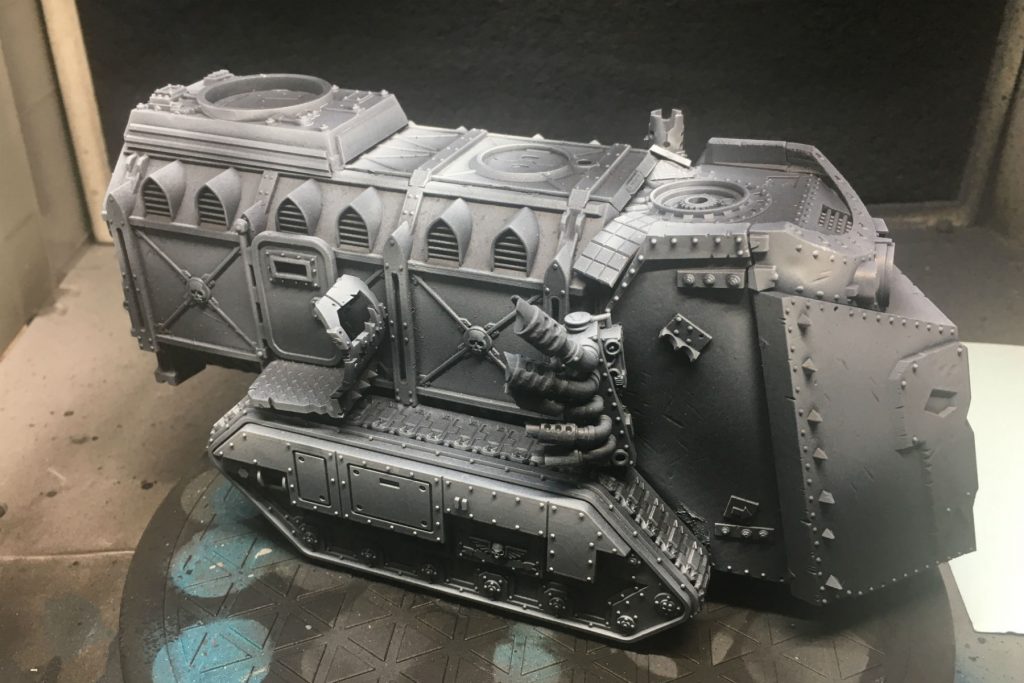 I then prepared the model for paint by doing a zenithal prime (and some… modulation I think it’s called?) in preparation for paint. Which will be next week! 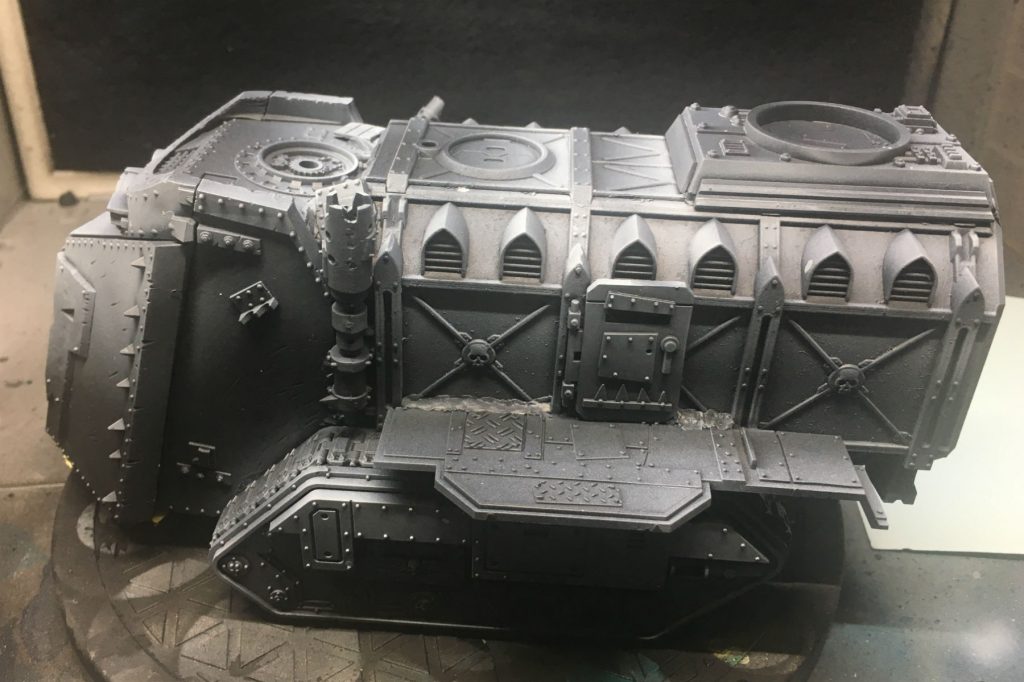