If you’re a Privateer Press fan I’m sure you’ve heard of all of this information already (since it’s been swimming in the aethernet since Templecon last Friday), but I’d just like to share some of my thoughts about the veritable slew of amazing announcements Privateer Press has been making. We’ve got the IKRPG and my own personal favourite, War Room.

But first up: Colossals

These are big, huge steam-machines, likened to a cross between Warjacks and Battle Engines. I personally think that these are not true colossals (as detailed in the IK and WM fluff), but just a progression of the arms race: more force packed into a smaller frontage. I have these feeling that (allow me to borrow some phrases from 40k here) the current colossals are less like the Titans (which I feel the old Colossals were), and more like a very expensive Warjack or Mega-sized dreadnaught. This is an important distinction because even though they are larger, more armored and have more hit points (as their double damage grid would entail), they can be taken down with much of the same tactics as warjacks (I mean since they still occupy the same game system as warjacks), unlike colossals where the Trollbloods (and I assume other forces) need to use terrain and guerilla tactics to take them down. Also, they are stated as being as ‘nimble’ as warjacks, and so I assume are much more dextrous than the older plodding colossals were described as.

Now, are they a good thing? I myself am unsure. Between the battle engines and now colossals, I don’t know if we’re getting too many different unit types. Rules bloat, as you were. Then again, a fellow player has said that ‘Cavalry hasn’t fundamentally changed the game, and neither has Battle Engines’. And I have to admit, that’s true. As amazing as they look, Battle Engines and Cavalry are (SO VERY THANKFULLY) just another option for players; neither game breaking in their awesomeness, nor so mindnumbingly useless that they are never considered as an option. So, I think I’ll give Privateer Press the benefit of a doubt and be optimistic about the future of Warmachine.

Besides, they gave Khador the Black Dragons. 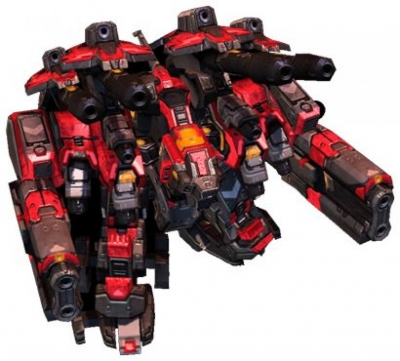 I think they deserve some brownie points for that. =)

This has been a long, loooong wait. I love the Iron Kingdoms setting, and will definitely be buying myself a copy, if only to pore over the fluff. I’d love to game and/or DM in it, but considering time constraints, I’ll have to file it under the ‘it’ll happen if it happens’ category.

I think it’s interesting that it’s PP’s own proprietary system (say that 10 times fast), with what seems to be the 2 or 3D6 system, with boosts and life spirals. I also think that it’s a good thing that they’re overlaying multiple facets of character creation (apparently with Archetypes like Smart vs Violent vs Skilled) together with your traditional classes and skills. Any way to differentiate one character from another is a plus in my book.

The only thing I’m worried about is Jedi syndrome. If you can play a Warcaster right off the bat, I don’t see why anyone else would want to be a gunsmith or fighter. And heaven help us if it comes with a Warjack.

But if they manage to solve or sidestep that issue, I think this will be one of my new gaming systems of choice. It helps that I already have all the miniatures for it, haha.

Last, and most definitely not least, is War Room.

This is the ONE thing that I need to come out NOW. If it was just iBodger I’d be suitably impressed. But it also come with cards (the app’s free, each faction is $10USD). That you can mark. That immediately puts it into the ‘must buy catergory’. And the most impressive? You can LINK it with your opponents’ War Room. That means no more asking your opponent what everything does, how much life he’s got left on thast jack, or anything else. That pushes it into the ‘I CANT WAIT FOR IT TO COME OUT’ category. They’ve got a lot more bells and whistles on it, like constantly updated errata, links to rules Prime and Prime Remix embedded into the app, and also turn timers for steamroller. If I never need to use my el cheapo kitchen timers for tournaments ever again it will be too soon. I’m only sad that because of this ibodger will have to be discontinued, it has been one of the most important apps on my phone, and I owe Whicken a beer if I ever see him in a convention.

I doubt I will ever make War Room (and by extension an iPad or smartphone) a requirement in my tournaments, but I think it’s pretty safe to say that I will highly recommend it, and that it will become the peripheral of choice regardless.