First, a public service announcement: Armies on Parade is this weekend! I’ll be at the GW stores in Singapore this Saturday, since that’s when they’ll be holding the Armies on Parade in the stores. And on Sunday, my AOP will be moving to Gamestart at Suntec, just to show it off a bit more. 😛 But you could totally head to Gamestart through the entire weekend. You can see some guys playing 40k and AOS, as well as try your hand at painting and playing, just like what happened in STGCC.

Okay, on to the meat and potatoes of this post. Over the last weekend, Adam Halon (also known as loler) was in Singapore as he started a tour of the region, and he was able to come down and teach a class at kolectiv studios. It was a great weekend, with me learning some new techniques, as well as putting into practice some of the colour theory stuff that had been sitting in my head but not actually coming out onto the brush as often as it should. 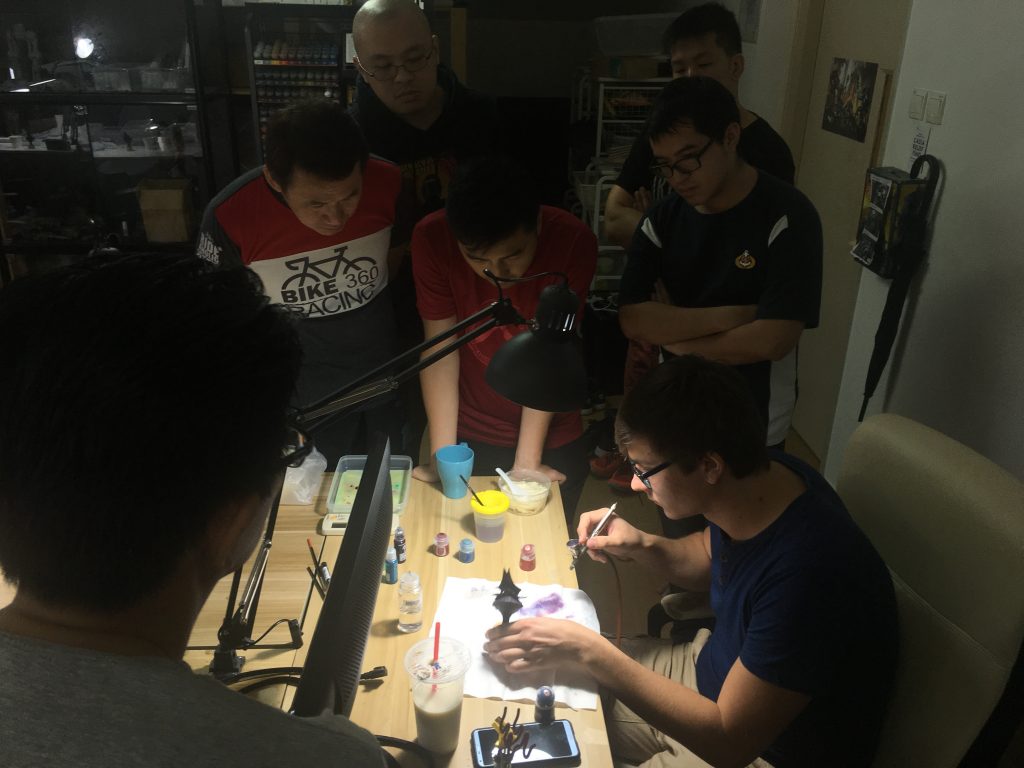 One of interesting things is that Adam Halon only used the airbrush for laying down the coloured preshades; a cool shadow, a midtone, and a warmer highlight. Everything else was brush. Quick sketches for establish values, then smoothing, or grunging, with brush. Definitely important to note for painters who think that airbrushes are an immediate ‘I win’ button. 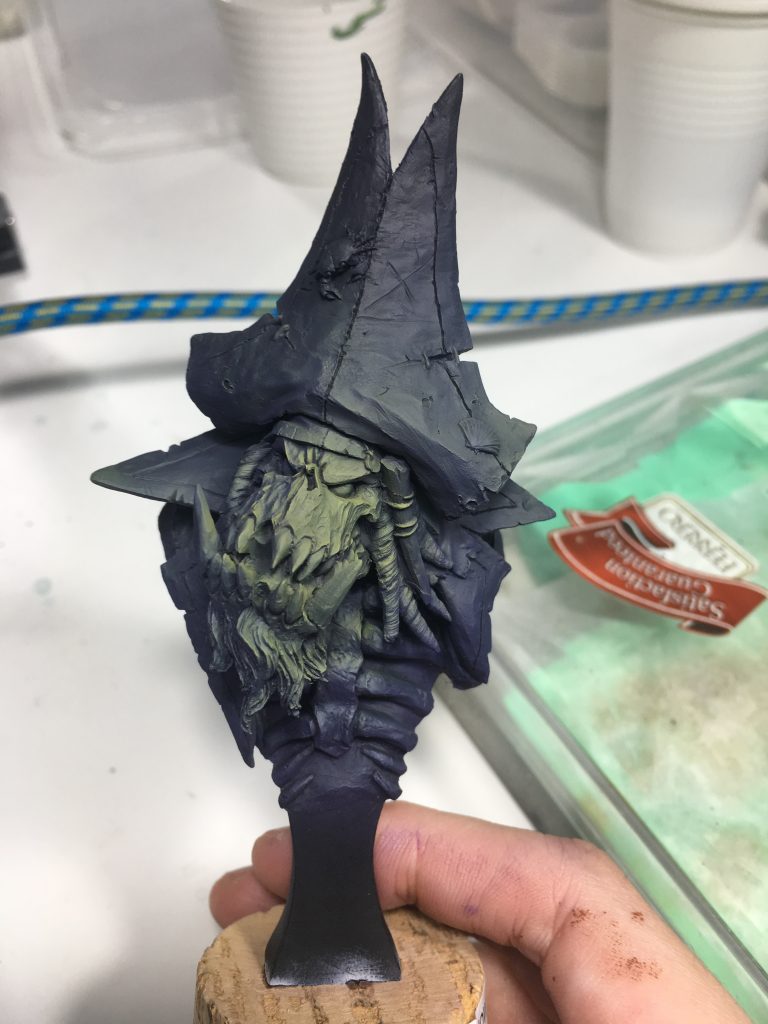 Here is the start with Big Child Creative’s Albrork, quite a fun model we used for the workshop. I think Adam and most of the classes went with a warm green and a cooler violet, with blue as the transition. I tried to push the colour contrasts a bit more, with yellow and purple instead, although I don’t think you can really see it in here.

For reference, future shots will be paired with Adam’s version first, followed by mine. I just didn’t get Adam’s pre-shade shot. 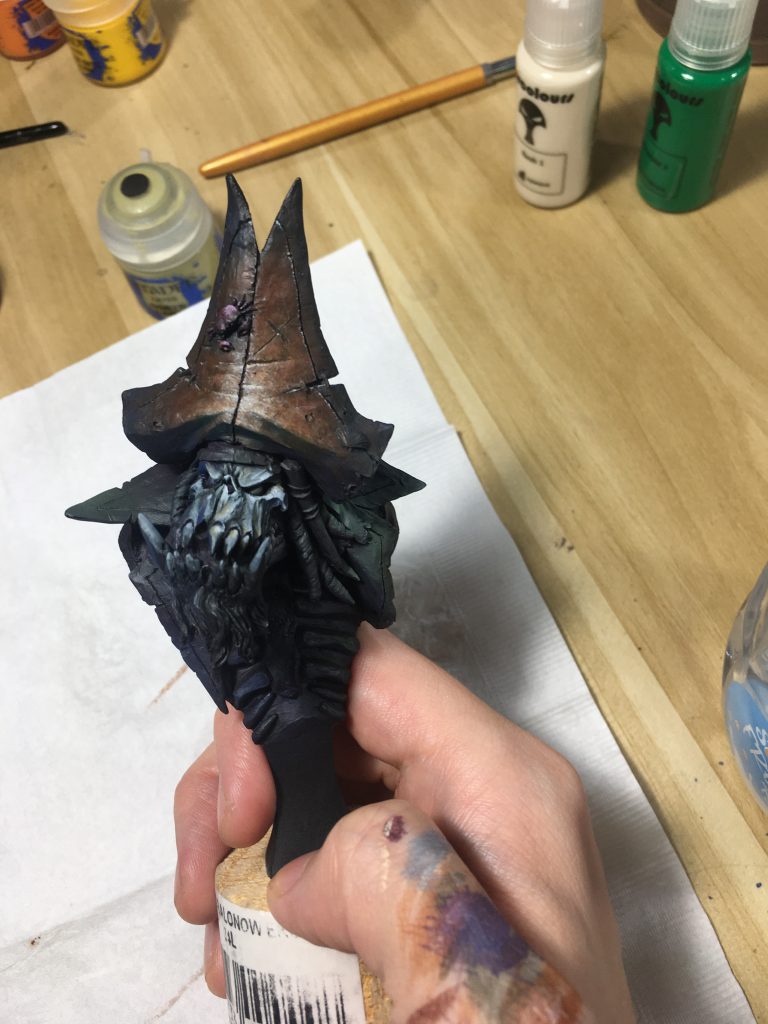 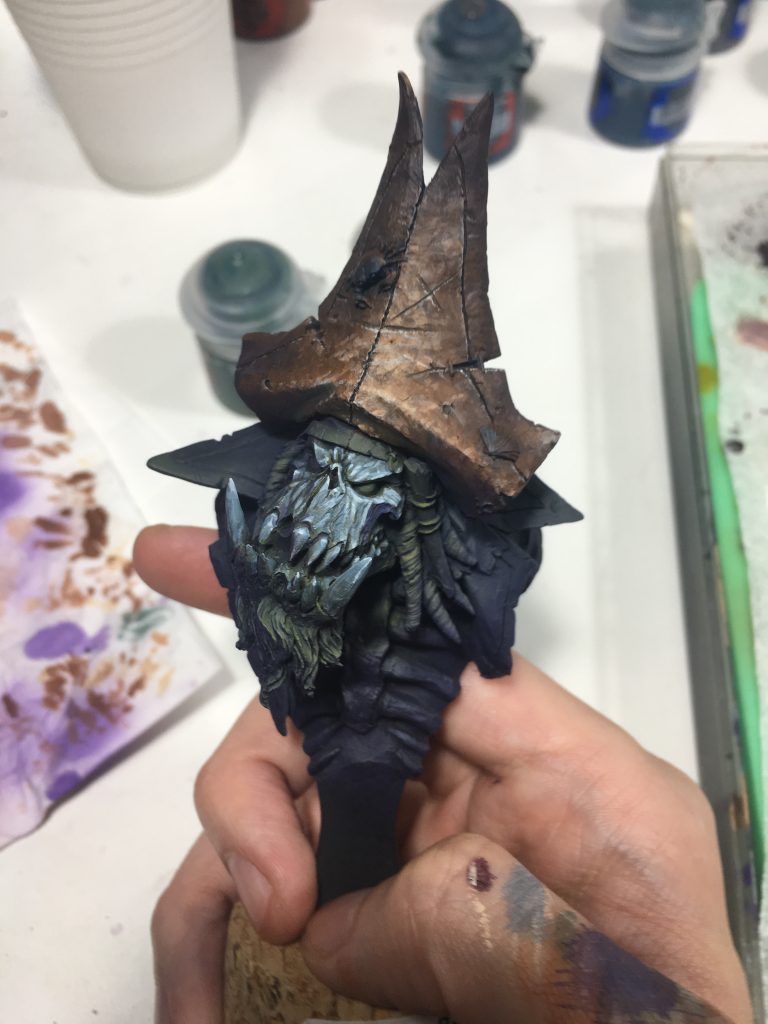 Next was the step that I’m kinda embarrassed I never thought about. To establish texture, rather than painting with a good brush, Adam got us to sketch with the grungiest brush we could find. Painting in dabbing strokes, you can see how on the hat how the texture developed. On hindsight, this should have been obvious, since I totally use grungey photoshop brushes for this exact reason. I have no idea why I never thought of using it with actual brushes.

You can also see the start of us laying down the colours on the skull. 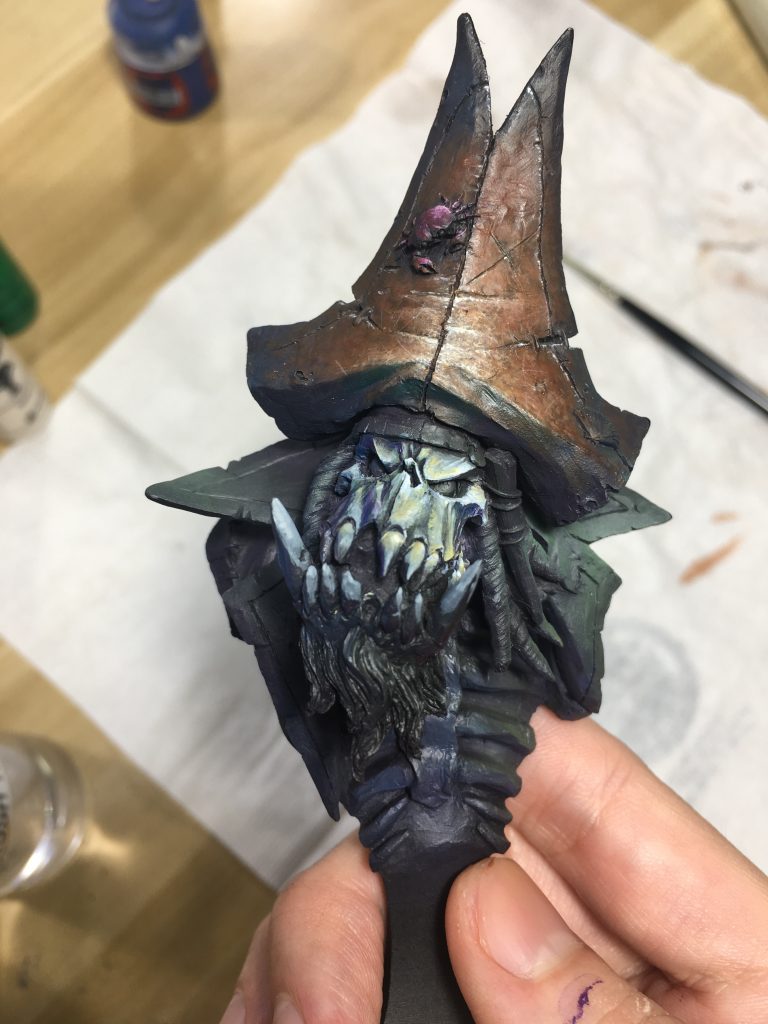 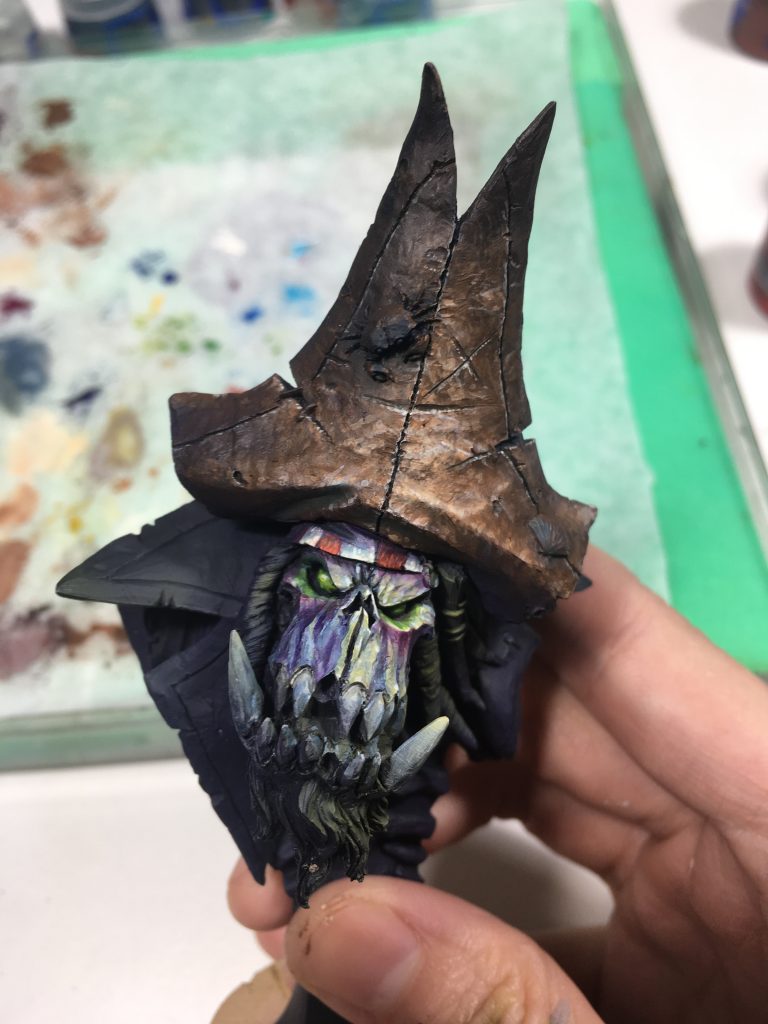 Another thing we would be concentrating on during the weekend would be colour theory. Now I like to say I know about colour theory. I know my complementary and analogous colours. I know I should push warmer or cooler depending on the context. But I will have to say I never pushed colours as much as I did during the weekend, and it was great to let my hair down and play. I pushed yellow, and blue on the skull’s highlights, green on the hat (can you see the green?), and even violet around the eyes. It was greaaaat fun. 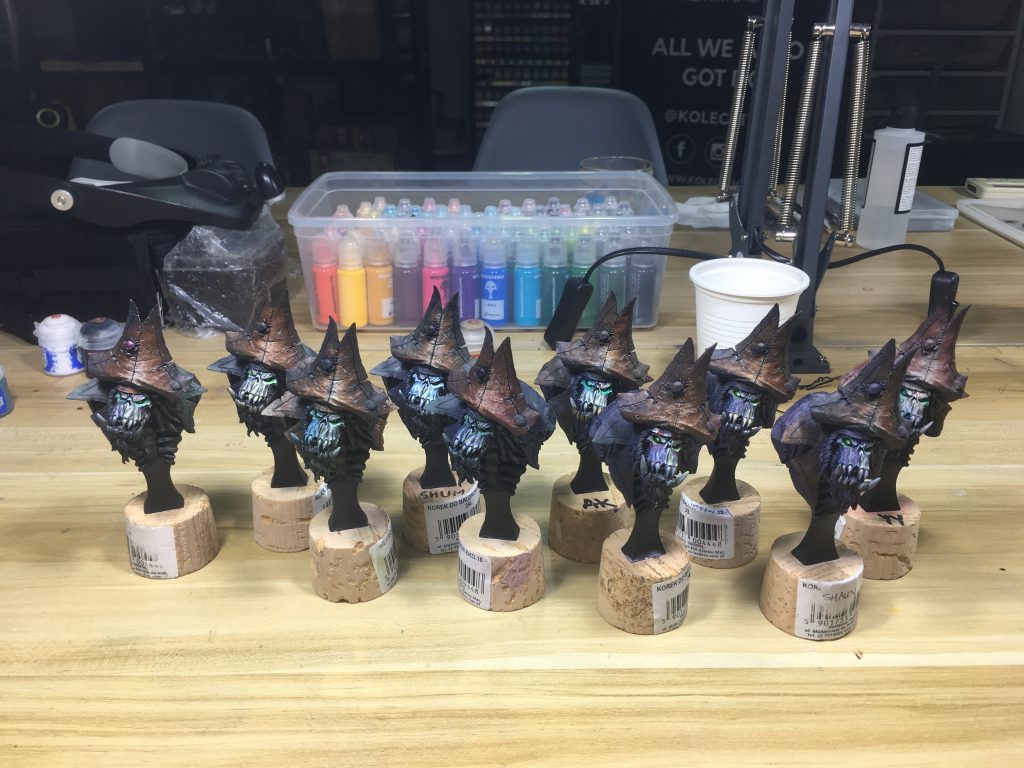 Incidentally, this was where everyone stood at after day one.

Day two was us continuing to put what we learned in day one into practice. 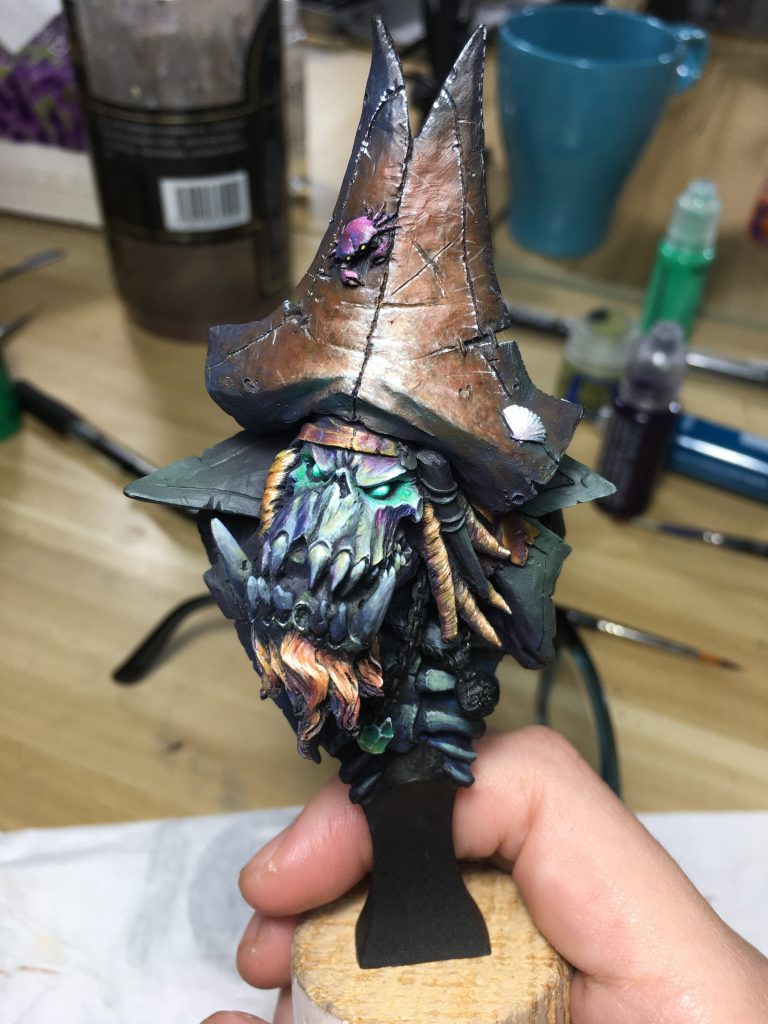 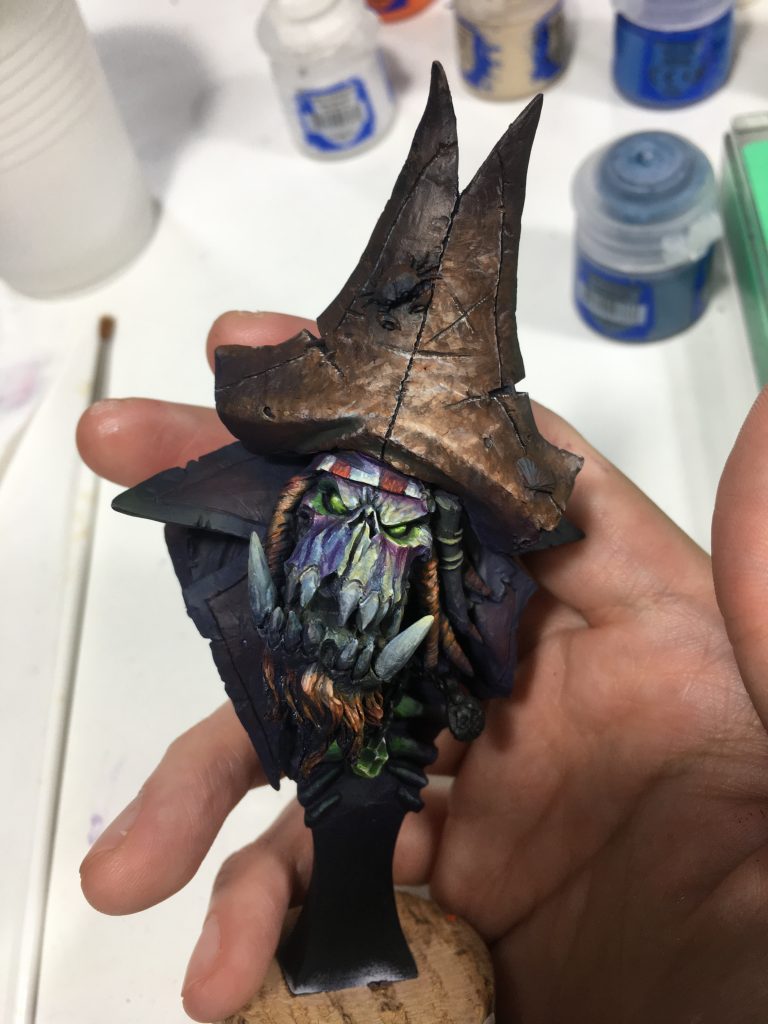 You can see the extra stuff we were starting to do. Blocking the colours on the hair, painting the ribs, as well as painting the jewels. 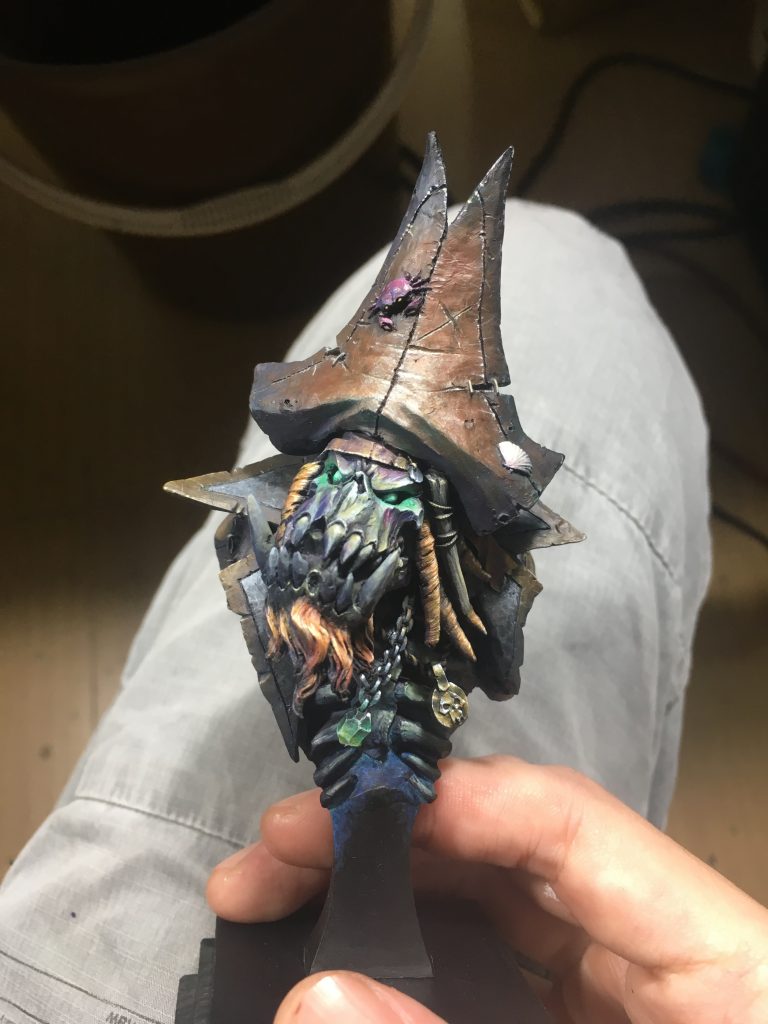 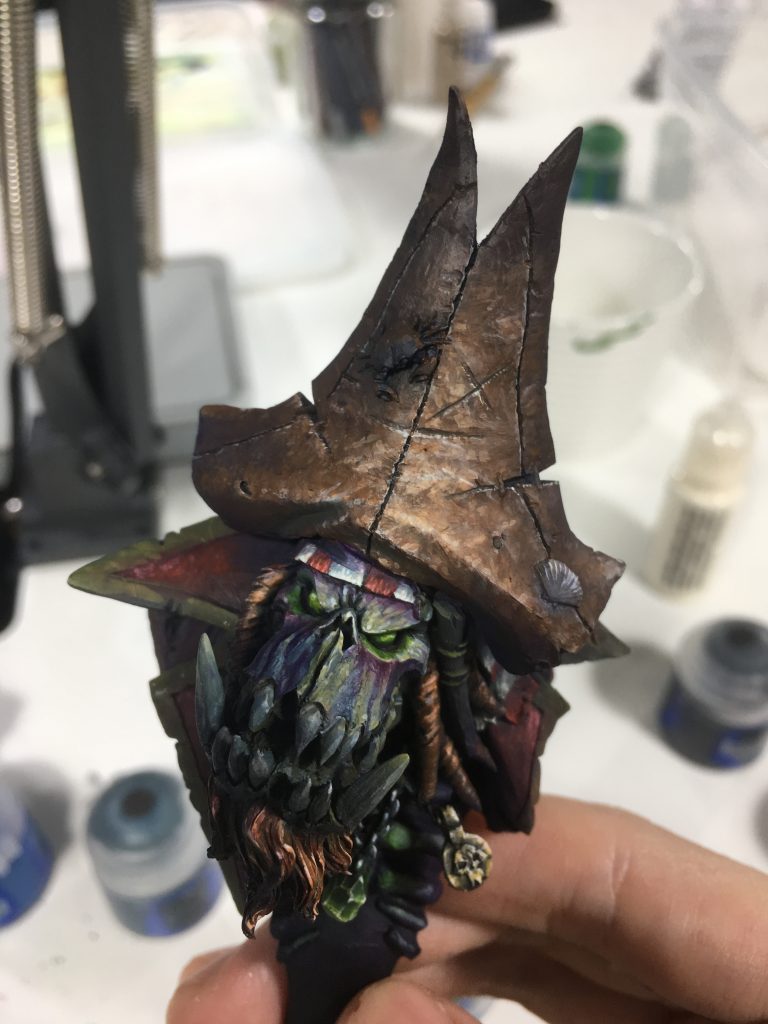 We even did a bit of NMM in the metal chain and gold medallion. Incidentally, I NEED A LOT OF PRACTICE on NMM. This is the first time I actually tried to paint NMM. No, airbrushing grey on my Brotherhood of Steal doesn’t really count.

As a bonus, here’s an almost done shot of one of the other participants. Keith… I think? His NMM is loads better than mine. 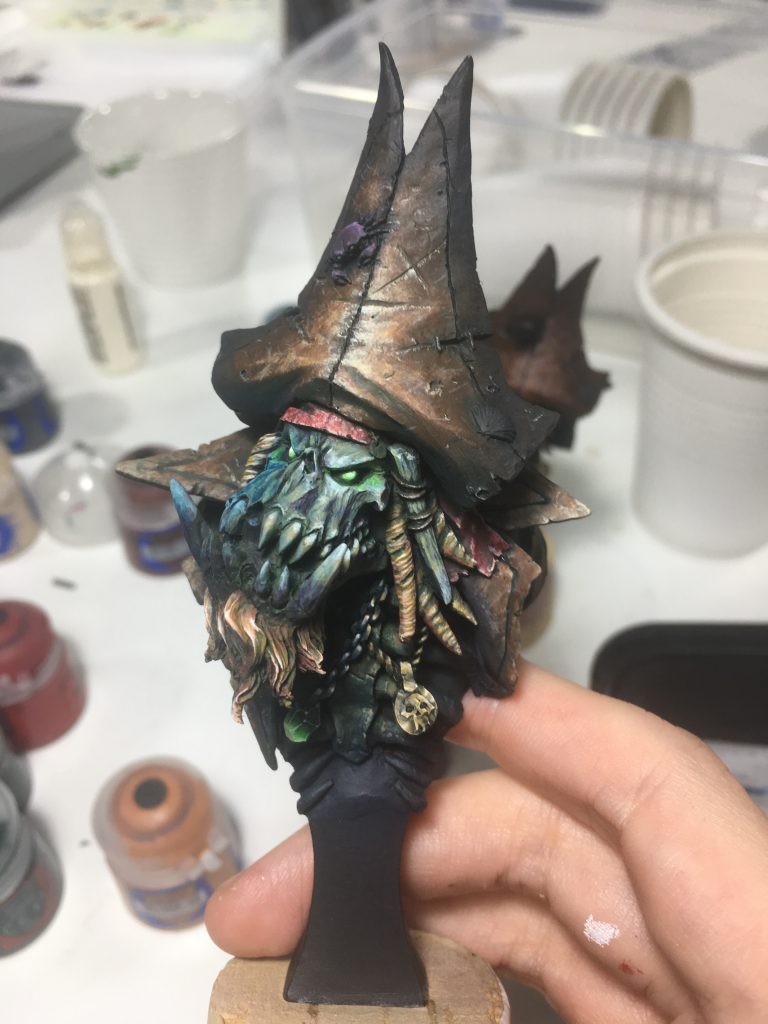 It’s also nice to see how different colour choices change the overall tone of the piece. My red and gold coat might be more interesting (I was channeling Le Chuck), but the relative mutedness of the all brown coat below really frames the skull well. Which it should. After all, the face is the centerpiece of the model after all. 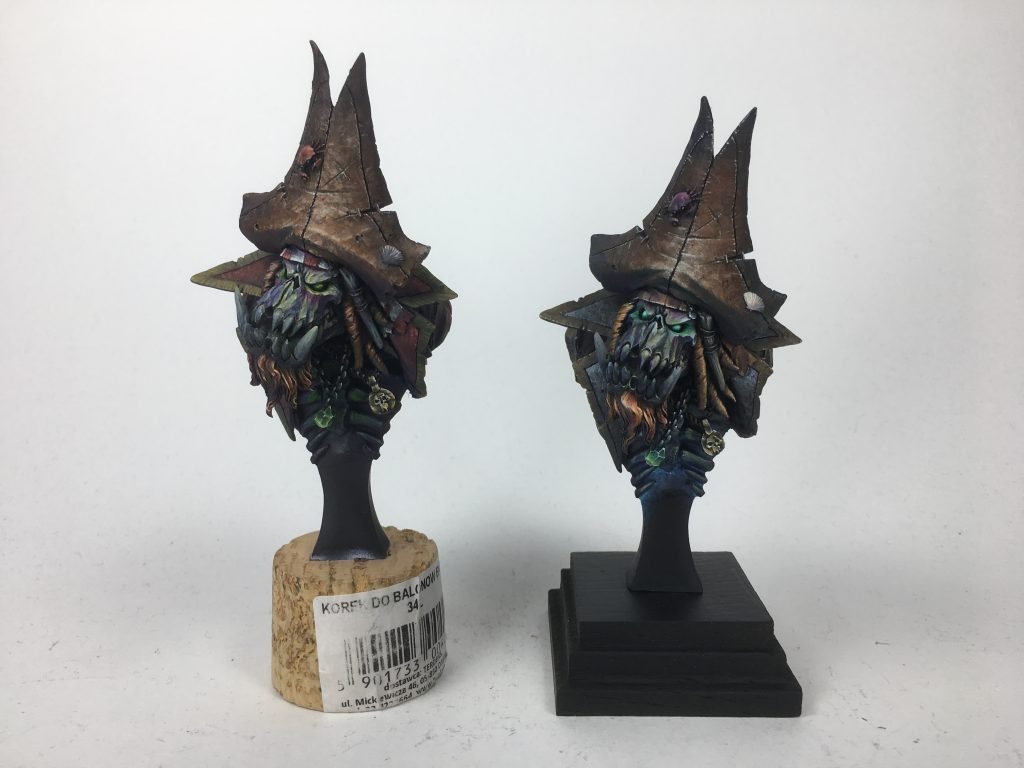 And here is Adam’s and my piece after that long weekend. Apologies for the crap photo, I only bought my potato iphone to the workshop. 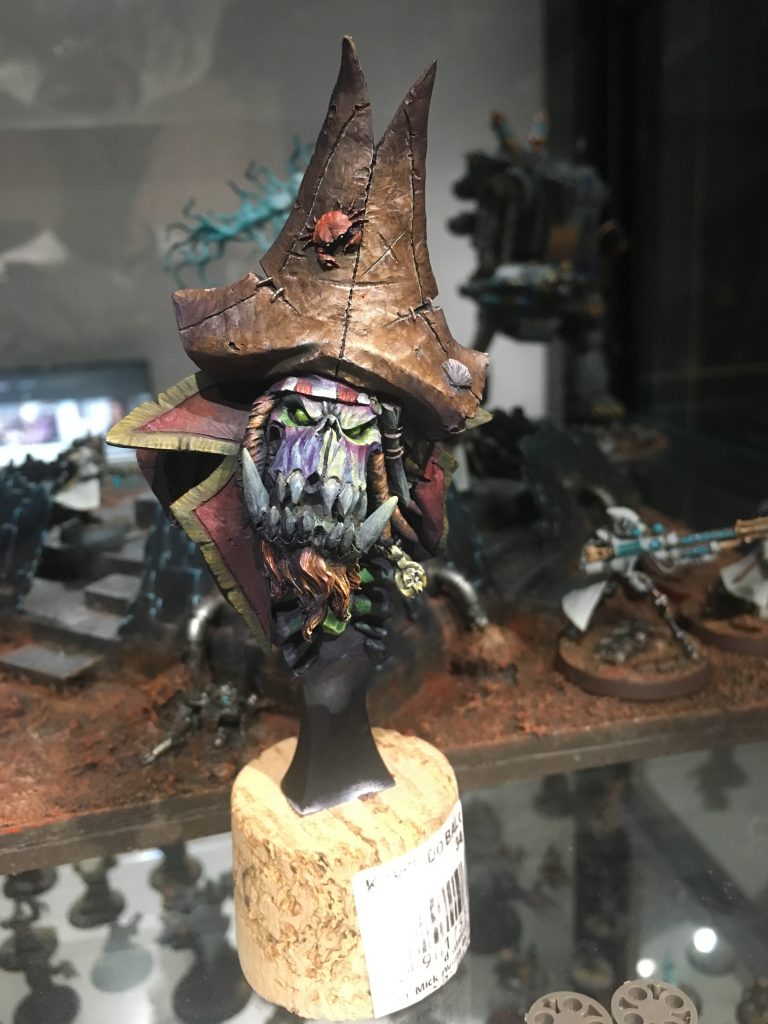 And here it is almost done and in my display area at home. I have some teeny bits to finish up, and to get a proper display base for it, but all in all I’m really happy. I got to pick up a new technique or two, and more importantly put into practice and really push some of the colour theory stuff that was swimming in my head but never actually putting onto a mini. I’m sure the others who attended it enjoyed themselves as well. Apologies for not getting a final picture of all the busts together, but here’s a quick video that kolectiv put up. It’s the closest thing I’ve got. Sorry. >.>;;

Okay. Back to some final rush stuff for AOP 2018! See you this weekend! 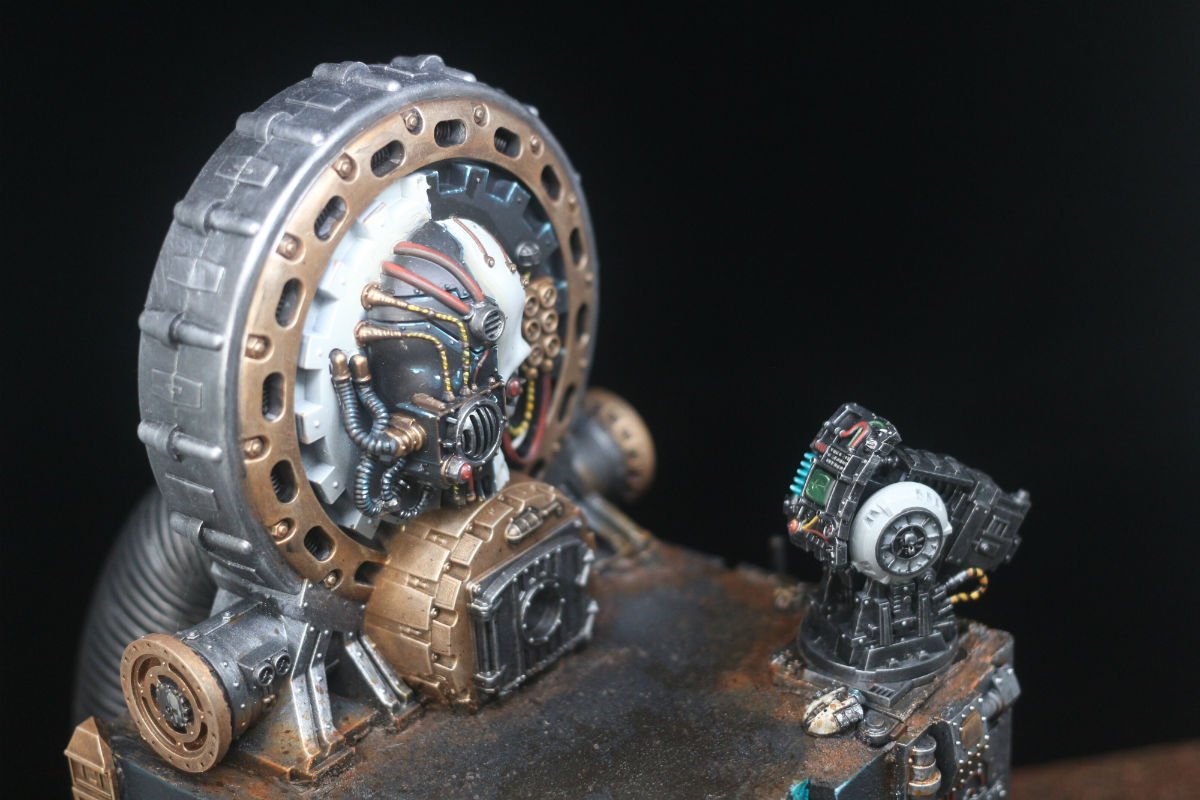