Talk about an embarrassment of riches! Privateer Press has been going on super-hyper-overdrive these few days, with I think more than 5 releases this past week. We’ve had Drake Mcbain, the action hero of Immoren, satyxis up the wazoo, but to my great delight, we’ve also go a new inclusion in the Dire troll family! 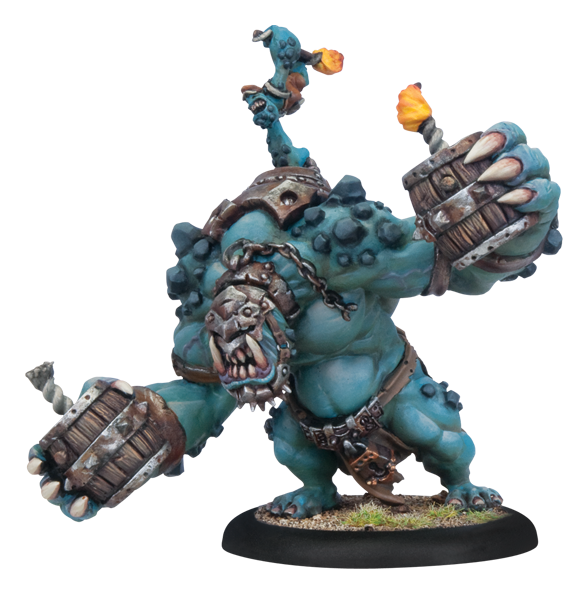 Part of the blurb mentions that he’s Dire troll that chucks immensely volatile explosive, and the Trollblood forums have been going into a total frenzy. We’ve got things like 10″-12″ range, AOE 5″ explosions that have the ‘Devastation’ effect running around as rumors!

That’s much too unbalanced for the developers over at Privateer Press. Personally I think he’s going to be more like the following:

or if it’s a 1-shot or 2-shot weapon, I could see it being increased to

Range 10″
AOE: 5″
Pow: 16
With the auto knockdown effect of the renegade’s obliterator rocket.

He’s probably going to have double open fists, but other than I don’t see much more… not without increasing his points costs even further. He is still a welcome provider of AOEs to the Trollblood family, and with the impaler would be able to throw the bombs a pretty dangerous 14 inches. Deviations may be problematic though.

The sculpt is actually pretty good. The only thing that annoys me is the mask (like he’s a steampunk phantom of the opera) and the claws. All trolls have had nails the whole time. Having claws on a diretroll is a discrepancy much like how some trolls are painted to have pupils (the fluff states that their eyes are a solid colour). It just annoys the biologist in me to have some things anatomically ‘off’.

His general pose allows freedom to be a Mauler, a Blitzer or a Bomber. More importantly, he’s got straps across his arms, wrists and waist. These are prime places to break up the mini, leaving in most likely the following parts: Legs, body, head, arms, hands. That means you could swap out the hands to get a mauler.

Also, the chains and back metal plate (if you look at the rotation on PP’s site) seem like they could most definitely pull double duty as a place to mount a slugger (like the blitzer) as well as unbroken chains (like the Blitzer). The price also seems it would be kinda cheap if it were a metal model.

So yes… I would think that a multi kit (or at least a plastic kit) is wholly plausible, and I will be praying that our guesses are correct. Either way, I’m looking forward to adding this giant bomber troll to my collection.