This week we look at more great models from Privateer Press, as well as the new Warhammer Fantasy Terrain options released by Games-Workshop. It comes a liiiitle bit late, but what can you do when your server’s down, right?

Hordes continues to make a great showing, as we’re still only about halfway through the Hordes MK2 releases (with the Circle and Minions book still to be released), but I’m sure that by the start of the new year a lot more Warmachine: Wrath publicity will be in the works. Until then we have some exciting models expanding the options of all Hordes factions. 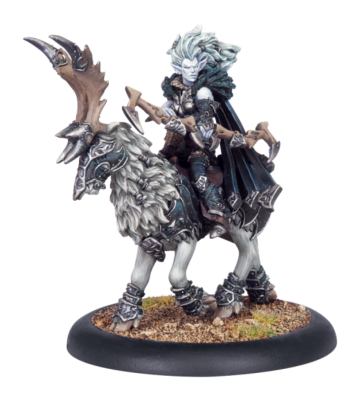 First up, we’ve got two character unit attachments. The first is Anyssa Ryvaal, an attachment for the Nyss Raptors. Like all raptors, she’s sitting astride one of the Legion’s monster reindeer of doom, and I have to say it’s a nice sculpt. It’s hard to lend an aura of menace to reindeer but this one does… and looking pretty elegantly menacing too. I wonder what she’ll be able to give to the raptors… I’m guessing something that allows them greater threat range or offensive firepower, if her name of the Talon of Everblight is anything to go by. 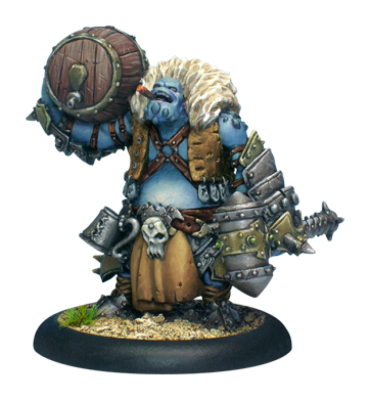 It’s nice that Borka also gets a new cigar chomping drinking buddy in the form of Skaldi Bonehammer. While he’s a lot pudgier than the good ol’ Kegslayer, I’d hazard a guess that he’s just about as frightening, given that he’s the UA for the Trollkin Champions (at P+S 11 weaponmaster with reach to boot). He also grants a real good buff to the champs in the form of Granted: Overtake, which would really help their threat range. I just wish the keg that he was carrying around did something, like a cute mini-feat. 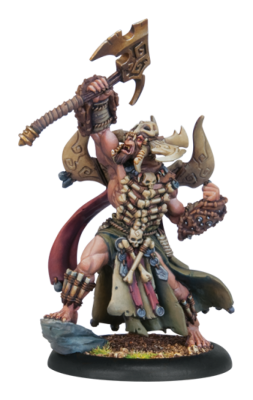 The Tharn Ravager Chieftain is another good looking model. The bones on his chest seems reminiscent of some of the native american design, which is an interesting aesthetic to mine. Unfortunately, his strange superhero cape/horn thing is a bit strange, and not something I’d include in my model. Still, it looks like he’s definitely going to help the Tharn Ravagers in their mobility and offensive firepower. Considering the Skinwalkers are the Circle’s go-to units for defense and staying power, it’s good that Circle has some additions to differentiate them from the Ravagers, especially since both are multiwound units. 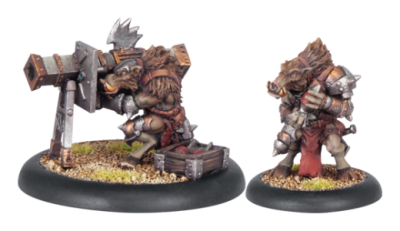 Lastly is the Farrow Razorback Crew. From an AOE on top of a light beast to an AOE as a weapon crew. I’m pretty sure that it will more or less do the same thing as the Gun Boar, but it’d better be either a lot more accurate or a lot cheaper than the Gun Boar, considering the fact that the beast-mounted version has much more hitpoints as well as the advantage of being able to boost. 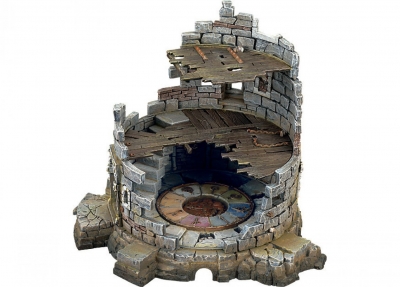 On the Games-workshop end is their new terrain, specifically the Witchfate Tor and Dreadstone Blight. These follow GW’s previous offerings for terrain such as the Arcane Ruins and the Fortified Manor, but I much prefer the previous terrain products. The new towers seem to be quite specifically designed for Fantasy, whereas older terrain while made for Warhammer Fantasy was generic enough to be used in most other miniature games. Plus the footprint of the towers seem a bit large, limiting their use to one main set piece, versus the fact that both the manor and the ruins can be broken down and used in a multitude of ways.

That’s it for this week’s minis week in review. In the next few days I’ll be going into detail of the new Trollbloods and Everblight books. And as usual tune in same time next week for your dose of minis!