Well the black boxes for Games Workshop are out, and it looks like maybe there’ll be a short break of GW releases, but this week we’ve got a veritable plethora of Wrath spoilers! Under the cut we’ve got Battle Engine Info, more details on the Khador Gun Carriage and Arcantrik Force Generator, and finally the cover art for Warmachine: Wrath. 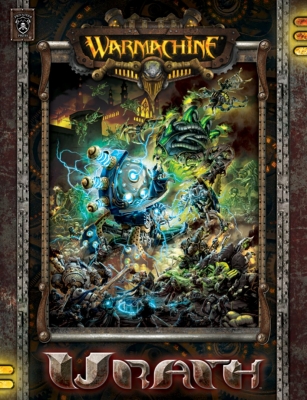 In the cover we have Cygnar and Cryx. Constance Blaize and her warjack Gallant is easy enough to spot, essentially paladins of Morrow squaring off against the undead hordes (and not undead Hordes, there’re no feralgeists in sight). Lord Exhumator Scaverous and his jack Erebus seem a little harder to find though, but I believe that’s them in the lower right corner. Scaverous being the skullheaded guy with the scythe and erebus being the slayer chassis helljack next to him. The PPforums have some blown up shots of them if you’re interested too. =) 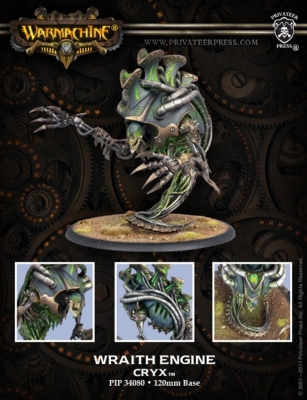 Since we’re talking about Cryx and Cygnar, how’s about a final rendition of the Wraith Engine to boot? It’s a creepy awesome sculpt, and Matt’s paints on the model makes it even better. And I would hate to face anything so huge that can ‘become incorporeal at will or hide its presence in a cloud of ectoplasmic smoke’, and ‘appear suddenly among its victims, slashing them to ribbons with its scything talons and drawing their souls into the glowing, green furnace of its innards’. Considering that Battle Engines will be the first thing to be shot at, any sort of defensive ability on a Battle Engine is a GOOD thing.

Why will the Battle Engines be the first thing to be shot at, you ask? Because thanks to the Good Ol’ Boys at Bell of Lost Souls and Lyoss is Burning it seems we’ve got spoilers as to how they’re going to work (although I’m not sure how accurate any of this information is).

First Up: Huge Base Size (we already knew that). Plus terrain doesn’t block LOS or give them defensive bonuses. That’s right, no cover, no elevation, no concealment, no nothing, and you can always draw LOS to them PERIOD (sounds like stock in ranged weapons just went up).

Second: They can’t be thrown, made stationary, slammed or knockdowned. They also have pathfinder (ignoring more of terrain) and can be repaired. Again this makes sense. I’m guessing the Mechanik UA for Khador and things like this are to encourage more armies to bring Mechaniks as well.

Lastly, they can still run, aim and charge. Which would be significant for things like the Khador Gun Carriage, which is Cavalry. 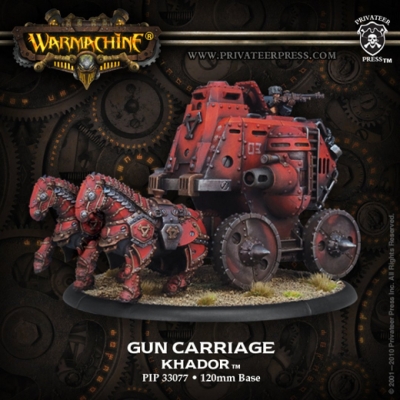 I think that this means that Battle Engines are going to be used as huge LOS blockers. 10 points on average means you’re not going to see many of them in games less than 50 points, and even then barely. I don’t know when you’re going to see the max FA of 2 in an army.

I mean, the Khador Gun carriage is pretty great. Two Rng 14 Pow 14 AOE 4s ain’t nothing to sneeze at, and SPD 7 Pow 12 horses (at MAT 7 to boot!) means that it’ll break through lines, get impact hits and get in your face shooting AOEs at a 21 threat range. But 10 points is a significant chunk of change, especially since it’s fighting for the Heavy Support slot that jacks usually fill. The thought of taking 2, even in a 50 point list, probably means you’re fielding 1-2 jacks with minimal support, which might mean an unbalanced list. Still, I can imagine 2 of them and 2 Mortars in a Sorscha drop and pop list. Yikes. 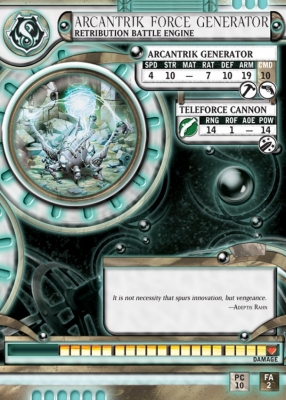 Personally though, I like the Arcantrik Force Generator. It gets +2 RNG if you aim (18″ threat!) and the choice of rapid fire (1d3+1) or AOE 4″ means that it can comfortably sit at around your deployment zone, and throw 18″ POW 14s obscenely accurately (Rat 7 + 2 for aiming). I hope you never let it draw LOS to your caster.

The Ret units for Wrath also look pretty awesome. Their light artillery unit is the Heavy Rifle team, and a RNG 14 POW 7 Armor piercing attack for 2 points is something I would definitely take to punch a hole in MOW and jacks alike. For that and more Retribution info, go check out Lyoss is Burning.

Also, Wrath is set to hit in June! We’ve got PP’s scheduled June release and well… 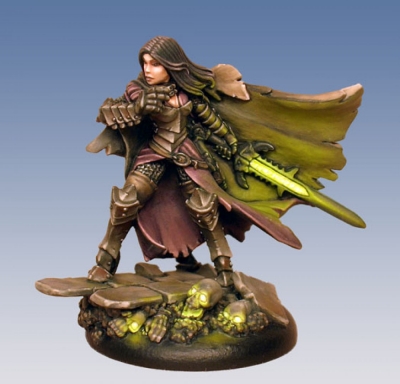 Alexia lost her undead, but I think it’s safe to say that she’ll still be a major spell slinger and a thorn to the side of cryx. It’s interesting, but between Constance Blaize, the Lord Exhumator and Alexia, I think that Cryx and all things undead are going to take a huge front row in the new WM arc.

And I REALLY hope Kommander Harkevich the Iron Wolf is going to be my IFP caster.

And that’s it for this week’s Minis Review… I really hope next week is going to be just as good a day for WM and Hordes. Well with NW hitting officially hitting shelves soon I think it will. 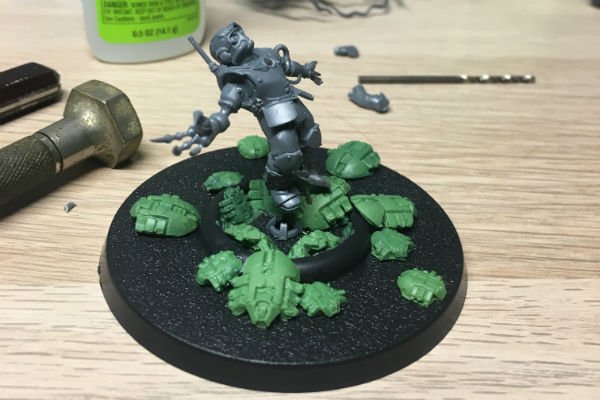