As we mentioned yesterday, Malifaux is the new craze that’s sweeping our LGS, and as someone that is easily affected by peer pressure, I soon caved and bought a starter and a handful of blisters. And how does it play? Interestingly enough. 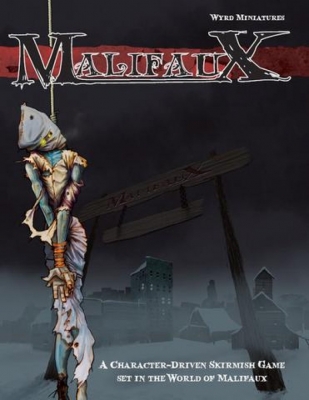 Malifaux is set in a world of the same name, kind of an alterna-earth where you have to cross a… bridge? To get to. And aside from its Victorian Steampunk Gothic Horror aesthetic (I’m cool with Victorian and Steampunk, but I’m not a fan of Goth Horror), it has a few other things to set it apart from your usual miniature games. 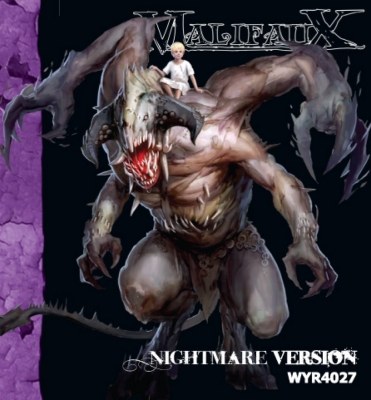 Firstly, it does away with the whole ‘I activate my whole army then you do’ in Warmachine or Warhammer. For the most part, you get to activate one model, then your opponent does, and so on and so forth. And while you make an army based on points (or soulstones) any soulstones left over get added to your master (kind of like your warcaster in warmachine) who can use them to alter and boost card flips. Most importantly, instead of dice you use a fate dec to determine attacks, damage, and so on and so forth. You can use their official decks, but a normal poker deck with two jokers (one red and one black) will work just as well; you just have to remember what suit corresponds to the Malifaux equivalent.

Like Warmachine, every model has a stat card with their abilities. But unlike Warmachine, for every combat you flip a card and add your attack stat to the card you flipped, while your opponent does the same (a card plus his defense stat). The higher one wins, and the difference in number will determine how effective (and damaging) your attack was. Different suits on the cards (and on the stats of your characters) may also trigger off offensive or defensive abilities. Not only that, but you get to ‘cheat fate’ by substituting the cards you flipped over with cards in your hand that your drew at the start of the game. 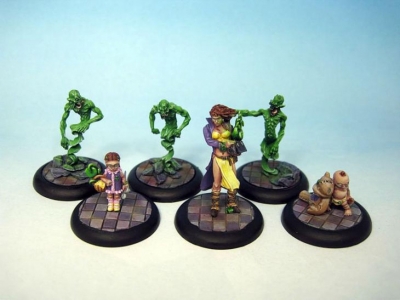 All these triggers and suits to watch out for means that Malifaux is that much more complex than Warhammer or even Warmachine, as every model has a plethora of abilities, spells and the like. It’s a good thing that Malifaux is played with a relatively small number of models (probably 4-10 models), as the individual activations and special abilities, as well as determining when you want to cheat or not would naturally mean that games would tend to gum up at the higher pointage levels. Even at low pointage levels I feel like there’s a bit too much going on. 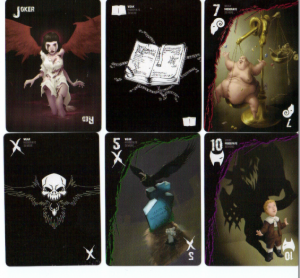 Another thing that’s interesting is that all games are scenarios; a main strategy (objective) is randomly chosen for each player at the start of the game, and the completion of that objective will contribute quite a large number of points. Not only that, but each player gets to choose two more schemes (or sub objectives) whose completion will also get you a point (more if you announce it to your opponent, but that means he can defend himself from it).

All of this leads to quite an interesting and in depth game. You have to play pretty defensively, since unlike most other tabletop games there’s the whole ‘I activate one model then you do’ thing; you can’t execute a huge sweeping advance and try to cripple your opponent before he can react. Unfortunately, I feel that this makes miniatures who CAN chain activations very powerful. And ironic since that was the one thing that seemed to differentiate Malifaux from other games. 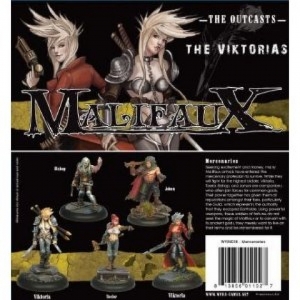 All in all, it’s a nice distraction from Warmachine and other games that I’m a fan of. The low model count means that it’s instantly less of an investment both financially and in terms of gaming and painting time, which is a huge plus in my book. And using a playing card deck (and the cheat mechanic) means your can predict or skew the probability curve in a way you can’t in other dice chucking table top games. But the design of the models (which I talked about yesterday), as well as the complexity (leading to a little bit too much complication to me) of the rules, triggers and so forth means that it’s not going to be much more than a distraction every now and then.

Then again, at least I have a fully painted, playable force. Unlike 40k. =p