I’m taking a small break from my Sylvaneth this week and returning to my orks for a bit. I’m trying to make a dent in some of my assembled and purchased miniatures, lol. Probably not going to work, but a man’s gotta try, right?

I kitbashed this thing a long time ago from an Assault on Black Reach Dreadnought, some Meganob parts, and killa kan feet. I tried also a little bit of salt brush weathering with hairspray, but then I never actually went anywhere with it. This thing has been sitting in my shelf for the airbrushed for the better part of the year, and I think it’s high time I got it finished.

Pictured above are some of the extra arms not in the earlier pic. I wanted to outfit it with the usual 3 power klaw, 1 flamer load out, so the extra kan arms were attached on where the dreadnought exhausts were.

As you can see, I also airbrushed the blue and the yellow stripe (to keep with my Brotherhood of Steal), and did some basic masking (where it made sense).

I then did the rest of the colours, laying down the metals, and blocking with the accent colours. I ended up painting the metals a solid gun metal and bronze, but I don’t know if I should have airbrushed, keeping the brown underneath instead.

I continued with the detail work, washing down and rehighlighting the metals, and doing the same for the red and hazard stripes above.

In the 1 year gap I didn’t paint it, I lost the face plate I was going to use for the deff dread. So like any proppa big mek, I just looted my bits box. I came out with… I think one of the banner bits from the freebooters kit?

I couldn’t be bothered to air prime just a small bit, so I just slathered a bit of white primer, then gave it a crazy coat of contrast gore grunta fur to grunge it up.

Maybe too grungey? 🙁 I repainted it over with a grey-green, keeping some striper brushstrokes for texture. Unfortunately, I rushed through this so didn’t get any WIP photos.

You’ll just have to settle for the complete pics.

I have to admit it’s not by best work, but hey. It’s complete, and it’s something. 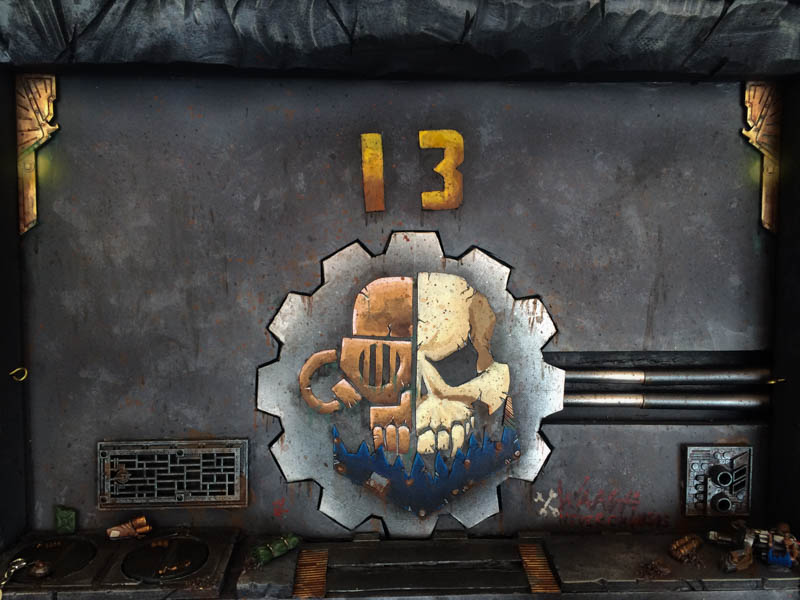