Looks like Forces of Hordes: Trollbloods is out! Unfortunately all we’ve got here in HereBeGeeks is second hand spoilers but well, when you’re in Singapore you tend to get used to delays in shipping and what have you. And not every month is Comiccon and Gencon month, if you know what I mean. 😉 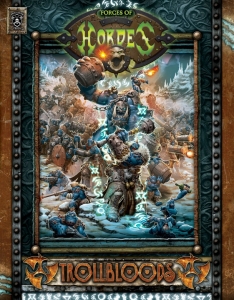 Regardless, let me assure you that I’ll pick up Forces of Hordes: Trollbloods as soon as they ship to my FLGS! Until then, we’ll have to content ourselves with whatever we can find online like from Lost Hemispheres and Guts and Gears.

Trollbloods have always been one of my favourite factions. While they definitely wasn’t my first, being the underdog always appealed to me, and when you can also be a horde of beer-guzzling heroes with scottish overtones, that’s even cooler. They always seemed like one of the ‘best’ factions (well, crazy old-shamans aside… I’m looking at YOU Hoarluk), and with their loose conglomeration of tribes (that’s kriels), are just trying to find a place to live.

That isn’t to say that they can’t be a force to be reckoned with when they need to be, and man do the Trollbloods get that in spades in their new book. Putting aside the awesome that we DO know (like Captain Gunnbjorn, and the blitzer)… we have anything from the spellcasting powerhouse of Janissa (I’ll have to do something about her chin) to the utility toolbox of the scouts, and I can say that Troll stock is definitely picking up.

Spells
– Can place a Rock Wall template completely within 5″ of her as a *Action.
– Tectonic Shift, *Action which causes enemy models within 3″ of her to be pushed 3″ towards a table edge of her choice.
– Rock Hammer.

3 points for a character spellcaster as awesome as her seems to be in the realms of auto-include. A veritable toolbox of defense (Rockwall), movement shenanigans (Tectonic Shift/Force Lock) and corner case offense (Armor Piercing and Magical Attacks) means that as much as I said about her model the last time, means that I’ll probably buy her and figure out how to fix her chin. Her main draw is the rock wall (a +4 defense against ranged? I’m THERE), but I think that if you can figure out how to keep her alive, her Tectonic Shift and armour-piercing attacks are going to be game winners.

Reach, Tactics: Relentless Charge, Granted: Overtake, Counter Charge, along with all the other Champion goodies.

Looks like the guesswork of a named UA for the champions really did pan out! I can see the draw of taking him, that’s for sure. A champion already costs 2 points; and you get overtake and relentless charge for all champions, not to mention reach and countercharge for that one additional point. What I want is overtake to ensure that my champions get to make full use of their weapon master attacks… the only thing I worry about is overtaking out of defensive line.

You WILL probably need to take the Hero, which means you’re paying a huuuge sum of 16 points for what is essentially a 7-man unit, but that unit will be a FORCE TO BE RECKONED WITH. Another model I’m more than likely to purchase.

More definite purchases for me. Set Defense is gold on the Fennblades, and No quarter will be useful. In Step should help the fennblades tarpit even more, although I’ve always tended to brick up quite a bit so I don’t know how much that will affect me. One big reason why I want the UA is so I can use my Trollkin Kilt Lifter. It’s an amazing model and I want to make sure it sees play. Only problem is that we need a drummer. Enh, I’m guessing most people won’t mind me subbing in a Troll Piper for it.

I really wanna get these guys (they have awesome cute sculpts!), but I’m kind of undecided about them. They’re like the kossites of the Trolls. Sneaky, pathfindery ranger type, has a lot of tricks, but not much killing power. They’re on my ‘to-get’ list, but I don’t know if their utility will outweigh the offense that I can usually get. They are after all the cost of a KSB+UA, for example.

WEAPONS
Slugger guns, but Rapid Fire only if you stand still

Great art, but enh. They’re expensive, and while their ranged heavy infantry with hitpoints, you only get the concentration of fire you need when you stand still. A full unit averages 10 shots when standing still, and only 5 when moving. Maybe useful in ranged armies, but kind of a crapshoot anywhere else.

And that’s it for the Forces of Hordes new stuff. I’ll see if I can take them out for a spin sometime. =)