A few days back we talked about Android Netrunner, and why you should check it out. I feel that it’s a game that benefits a lot more from face-to-face tutorials than from just some set instructions on a blog (although if you guys disagree please do hit up the comments section), so let’s just dive in a little deeper into the game, as well as some of the newer expansions and the implications they currently bring to Android Netrunner.

Generally, both the corporation and the netrunner wins the game when they hit seven agenda points. The corporation needs to slowly and steadily advance their agendas, while the netrunner steals them from the corporation; be it from remote servers, HQ (hand) or R&D (draw deck). However, there leaves two additional secondary loss conditions, one each for netrunner and corp. The netrunner’s hand represents his life, and he dies (flatlines) if he is forced to discard cards beyond zero. Conversely, the corp loses if his draw pile is reduced to zero and he is forced to draw.

In addition, the runner can get ‘tags’ which is information the corp can use. When tagged, the corp can remove credits, deal damage to the runner and generally make life for the runner a living hell. These win and loss conditions, as well as whether or not the corp utilizes tags, are the foundation to both the difference in factions as well as the depth that comes from deckbuilding and mixing out of faction cards. 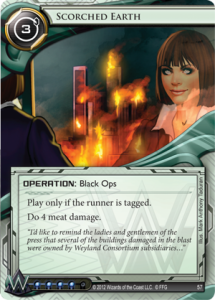 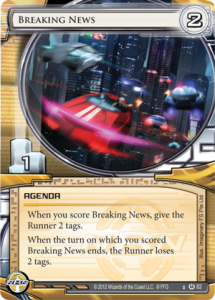 For example, one major strategy for the Weyland corporation is to tag the runner and inflict prodigious amounts of hurt, preferably flatlining him. This usually needs tags, which is something Weyland isn’t so great at getting. In contrast, NBN is a fast advance deck that can tag very well, but that currently is unable to follow up on these tags. This means that a Weyland player could add some NBN cards to increase the likelihood of tagging, and conversely NBN could add some Weyland cards to add a little bit of bite and aggression on his deck. And of course there is a limit to how many out of faction cards you can use in a deck, which keeps everything from going batshit crazy. 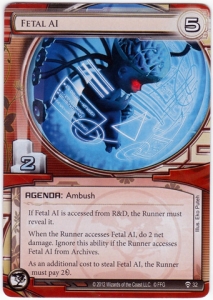 Adding further breadth to the game are the expansions. What Lies Ahead, the first expansion, is already in Singapore, while Trace Amount has been released overseas and is making its way down. Both of these expansions serve to broaden the options for corp and runner. For example What Lies Ahead really strengthens the tactic of traps in a corporation deck (you don’t want to hear our Yu-Gi-Oh jokes), and Trace Amount beefs up both protection from as well as consequences to tagging. The only thing I’m afraid of is there being a predisposition towards printing silver bullets; cards that negate previous cards, only to be negated in future expansions. This sort of ‘hard counter’ is somethign I hope that Android Netrunner will avoid in the future. 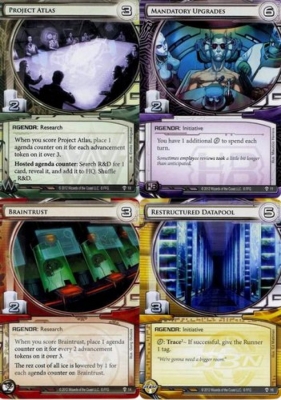 The future expansions look pretty darn interesting, so I will admit that if FFG avoids what I’m afraid of and is able to provide rich gameplay, I will have to say that I will be faithfully purchasing all current and future Android Netrunner purchases.

Android Netrunner is available in gaming stores now. You can probably find them in Singapore at Gamersaurus Rex and Paradigm Infinitum.

Stay tuned for the last installment of Cyberpunk Week tomorrow! 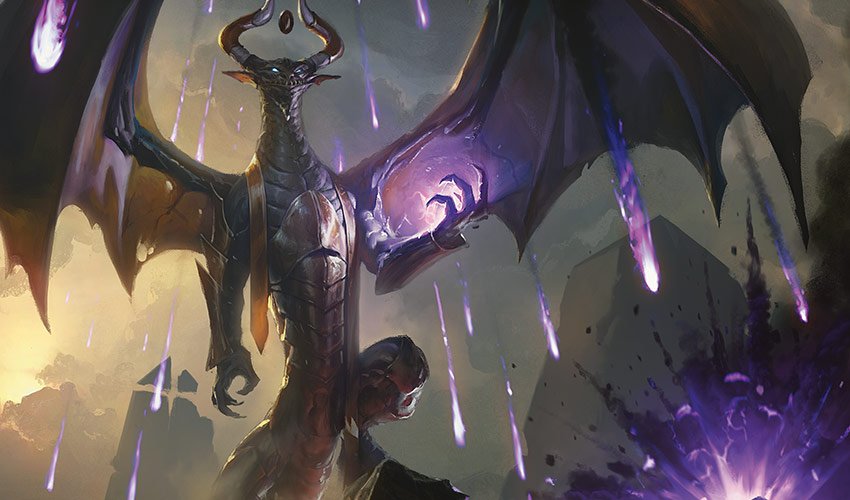