A movie review of X-Men: First Class with 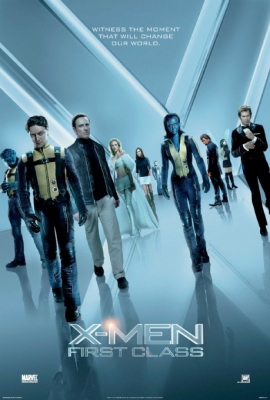 Stepping into the cinema, something caught us at first – that the publicity machine for the movie just didn’t seem to be running at full tilt, even with the movie due to open today. Sure, we were playing with an established brand, but given the deluge of superhero movies this summer, together with totally new actors (almost) for the characters – it’s as if the studio had taken their hands of the movie and hoped that it would fly on it’s own. Some of us would definitely still remember the really horrible posters that the movie started off with, and couple that with trailers that reused old footage – it appears the hope was that nostalgia would sell some tickets.

When we saw the early trailers and posters of X-Men: First Class, we were all more than a little underwhelmed. The special effects seemed unpolished, and as fans we easily fall into overly-critical mode, snarking that this character doesn’t have a particular mutation yet or doesn’t fit in with the pre-set continuity. Then we watched the movie, and it turns out that a lot of what we thought were ‘mistakes’ are quickly ignored if a movie is good. And we can fall in love with those very same things with a great plot and an excellent cast to carry it through.

And that is true – we might be giving away our hand and final impressions early, but if you want to avoid some TL;DR, let’s just say that while the computer generated and physical effects were passable and didn’t seem to belong to a huge big summer movie, the movie more than made up for it in spades.

Lol, yes. If you want to avoid the TL;DR of another reviewgitation, suffice to say that I would’ve given it a 10/10 except for the special and practical effects that made it seem as if some of the movie was filmed on a tight budget. But the plot and acting more than makes up for it in spades, and I’d much rather have a movie that spends 90% of its effort on dialing in on the writing and acting that one that spends 90% of it on explosions and CG (yes I’m looking at you, Transformers).

Overdependence on effects is all that is wrong with modern summer movie making, I say (yes, I’m looking at you, Transformers).

X-Men First Class still gets a 9/10 from me, and I insist that any geek out there needs to watch this movie. It is currently this year’s comic book movie that every subsequent movie will be measured against.

I’ll give my rating at the end, in case it serves as something to tempt you to keep reading! Or you can scroll right down. And now that’s over and done with, on with the review! We’re keeping this as spoiler free as possible. 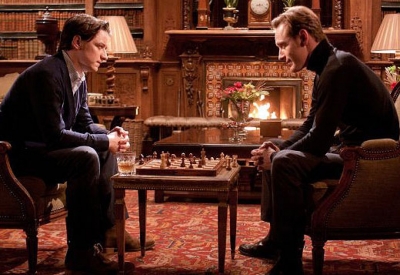 X-Men: First Class starts with a few minutes depicting the two (very different) origins of Charles Xavier (James McAvoy) and Erik Lensherr (Michael Fassbender), but soon drops us in 1960s America, at the height of the Cold War. It’s amusing to see that Xavier as a quick-witted, slightly douchey guy that uses his telepathic gifts to score dates with chicks. It’s nice to know that he wasn’t always that stoic father figure portrayed so well by Patrick Steward in the earlier movies.

We soon see the two leaders of mutantkind come into their own as they track down, recruit and train the various mutants with the unfolding Cuban Missile Crisis as the backdrop, and with Sebastian Shaw (Kevin Bacon) as the puppeteer behind it all. Of course, with their wildly dissimilar backgrounds, its only natural that what started off as their earnest (and for Erik possibly the only) friendship break apart due to stark differences in philosophies.

With Sebestian Shaw as the villian both of them can love to hate, Erik and Charles share a common ground for those tenous moments, and they play out the Charles and Erik diametric to perfection. There is a certain tension portrayed by McAvoy and Fassbender that thickens with each moment, Charles the eternal optimist, working with Erik in pure faith, and Erik working to do anything as a means to an end. It might be very familiar to all those who read the comics, especially for those who’ve seen Magneto come good, depending if it suits his aims – but in the end it’s all done deftly. Kudos once again to McAvoy and Fassbender for really carrying the film (and learning 5 billion languages each) – I wouldn’t have thought that good old Wesley (from Wanted) would have turned out to be such an impressive Charles, and Fassbender would be so good at portraying Erik’s angst and pushing himself when Fassbending metal. This easily helped the show became one about how the bromance became the love hate relationship it is today.

There’s a reason why I’m calling them Charles Xavier and Erik Lensherr. They spend 90% of the time out of the costume, and for that I’m glad. This may be an X-men movie, but it’s a character driven movie, not a superhero one, and it allowed the movie and the actors the freedom to portray the breadth and depth of both their characters.

Maybe there’ll be detractors, claiming that it isn’t an X-Men movie anymore, but the way the characters are fleshed out, especially the good old nemeses, this movie alone is way more X-Men than X3: The Last Stand or even Wolverine: Origins. 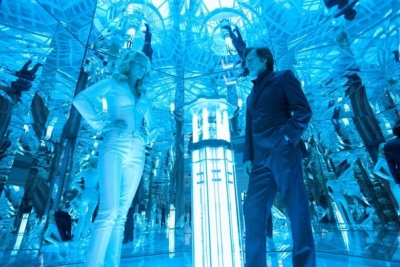 And if you were one of those who were wondering what Angel Salvadore was doing on the team when they had another flyer in Banshee – when your questions get answered, it gets answered in a pretty kick-ass way.

It’s also good to remember that the original X-Men trilogy already took tons of liberties with the characters, and so can be considered as an alternate universe. What surprised me was how this movie worked so well in terms of being able to tie in with the first 3 which I thought they wanted to dissociate themselves from – it might not be the most perfect match, but looking forward we can either expect brand new X-Men movies that move forward, or even some that dovetail back into the original trilogy.

Given that this happened in the past it’s unclear how much impact it will have on the 616 universe; the previous movies pretty much only influenced the costumes, and even that is gone now. And introducing any of the major changes in the movie might just screw up already convoluted character histories too much, so hopefully the editors at Marvel know very well what to leave alone and not retcon anything in from the movie.

And what a set of characters! It might be an a movie led by the 2 archenemies, but the X-Men is a team, and this movie doesn’t shy away from trying to make it so (sorry, no Patrick Stewart here, but watch out for the awesome cameos x2, especially a very subtle one, on top of a few namedrops for the fans). There might not be enough time for all the characters to make an impact, but strangely, there pretty much was! Everybody had a part to play in the huge finale, instead of Wolverine carrying the film, and watching the team come together and build bonds and evolve – that was pure joy to behold. 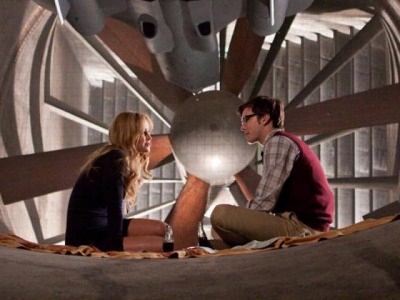 It helped that everyone had a part to play. Nicholas Hoult was charming as Hank McCoy. He had previously managed to engender so much emotion as Tony Stonem (Skins), and it’s great to know that he has the acting chops to take such a different character and make it his own.

Meanwhilst, Raven Darkholme’s (Jennifer Lawrence) relationship with Hank and her subsequent discussions with Erik cement in the reasons why she’s such a huge disciple of Magneto in the original X-men movies. And Caleb Landry Jone’s rendition of Banshee has the right amount of comic timing and excitement, and during his scenes I really wanted to carve a lightning bolt scar in Xavier’s temple.

In the end though what really tied it all together was the story. Origin tales can be quite a simple beast to handle (no pun intended), but the depth of the script, the way the Cuban missile crisis is played out – it doesn’t get more emotional and edge of your seat as this. In a Whendonesque take-no-prisoners manner a huge event happens right in the middle of the movie that really took the movie up to another level. So many people working on a script can sometimes take it in the wrong direction, but in this case a most fine dish was served.

Both of us were moved to tears at very different points of the film, mostly by witnessing the kinds of struggles the characters go through to survive, and the sacrifices made, inadvertently or not, to achieve that aim. I’d mentioned a game-changing scene earlier, but there are really quite a few of those which showcase character evolution. Very commendable in what could easily have been a popcorn movie. 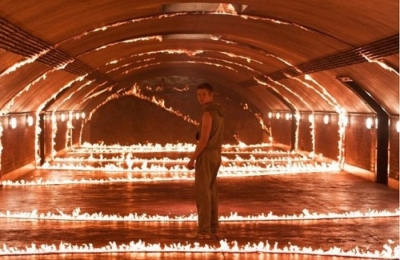 I think the only other things that left me a bit disappointed were 2 things: The camera work and editing, and one scene right at the beginning. For the latter all I can say is that healthy dose of deus ex machina was needed to bring the story forward, and for the former – I can’t blame Vaughn, because he really managed to squeeze amazing performances out of many of the cast. And it’s all easily forgotten – I’m pretty much nitpicking here.

Yeah, there was a bit of plot shield at the beginning, and again it looked as the movie was running on a pretty low budget: the effects were definitely not as polished as it could’ve been. But I’m glad that the biggest complaint I can give the movie is over the special effects and small nitpicks. I’d much rather have effects on a budget than gaping plot holes, and I’d much rather have comparatively small names acting in great roles than blockbuster actors that phone it in.

Vaughn’s tale of our merry mutants fighting to gain acceptance or fighting for revenge might have taken quite a lot of it’s influence from the original trilogy and from Grant Morrison’s run on the New X-Men, but at it’s core it’s the tale of our favourite mutants once again. Maybe the familiar like Cyclops are missing, but the fight for the different to gain acceptence, for the othered to be welcome into society, or to stand apart and proud – these themes stand strong. Add to that a healthy 60s aesthetic and great acting and we have one of the best superhero movies ever made – perhaps a template against how ensemble movies should be done. Will Avengers have anything to learn from this? Only time will tell. (And yes that is Riptide.)

It’s been a long time since we’ve been this excited (and this emotionally wrung out) after watching a superhero movie. It happened during Chris Nolan’s Batman movies, and it happened again here. As we mentioned earlier, it’s been a very quiet movie and marketing blitz. Almost nothing was mentioned, almost as if the studio execs didn’t want to spend too much money in case it bombed. But as you can see, budget doesn’t determine a good movie. Plot, character and acting chops do. Which this movie has in spades.

I hope X-Men First Class does really well in the box-office, because we all need more movies like this.

Average rating: 9.25/10, and a hearty recommendation to watch as soon as possible.