A reviewgitation of Transformers: Dark of the Moon with 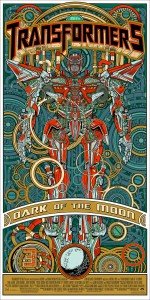 This marks the third and final installment of Michael Bay’s inept handling of our childhood heroes. Once again, steel meets steel as the Decepticons find new means in which to irritate the heroic Autobots. Fool us once, shame on you, fool us twice, shame on us. Has he fooled us for the third time then? What will the shame be on then, if there is to be shaming on? What price do we pay to risk entering Bay’s bayhemic realm once again (11 bucks, in 3D), and did we leave with our sanity intact? Why did we take so long to publish this review? Should we have even bothered?

I dunno! It was actually pretty decent this time round. I guess it helped that TF2 dropped the bar so low you had to tunnel underground to go below it.

If we were Michael Bay-cruel, we would write a fantastic intro to this review, then meander uselessly for about two thousand words, stop to stare at a Victoria’s Secret model, meander around some more, and finally give you one heckuva patriotic, uber-heroic epilogue.

But we’re not that cruel.

No, that we are not – the cruelty spawns from Bay’s mind, punishing us for having the vain hope that we might one day have a live action Transformers movie to be proud of, to wave our torn and tattered flag like Betty Ross. We continue to be at his mercy, and this time, he has deemed us worthy, allowing us concessions that, after Transformers 2, no man would even dream of getting.

But not the bazillion times we had to endure a slow rock soundtrack. I’ve never hated slow rock before Transformers 3.

Oh yeah. John Lui of Life! called that one. That’s my new pet peeve in transformers.

It wasn’t even good slow rock. What, Nickelback too expensive (hint: nobody actually likes Nickelback)? He did start as an MTV director, but surely we don’t have to be constantly reminded about it.

A thing worth appreciating is that there are crazy rotating cameras this time round. One suspects the 3D technology kept him reined in, but then again, he did come up with new ways to make the screen explode in new Bayisms.

In Michael Bay’s defense, this is probably the best movie of the trilogy. Oh sure, it’s like the tallest-midget-in-the-world award, but for all the bizarre plot holes, face-turn-heels, double-triple-crosses and deus ex machinas, but it was surprisingly watchable!

I actually thought Transformers 1 was the best action movie back then, so I will admit I was pleasantly surprised to see how close this one came – I’m really glad we got to watch it in 3D and while I will admit that no one comes close to James Cameron in envisioning movies in 3D, Transformers 3 showed that the much-derided technology had lots of untapped potential.

I’m not too sure about that – while it was good 3D in general, once you got to the harried action sequences it all went mushy. Action is where your 3D is meant to shine, and as of right now, it doesn’t really work. Also, the action in Transformers 1 left me cold, so Bayaction is probably not my cup of tea.

I still don’t think it was really worth the 3D, but hey maybe IMAX would make a difference. And I disagree, in that 3D helped prevent Michael Bay from Michael Baying the movie. I don’t need 20 twisty turny camera angles thankyouverymuch.

I got to see the Captain America trailer in 3D, so maybe that’s where all the love is coming from. Heh.

Oh yes, that was probably the highlight of the entire movie. The trailers. Pretty great – but a pity Harry Potter wasn’t screened in 3D. That was odd, but that also means that they’re cutting it a bit close for their post-processing. Still, the Captain America trailer in 3D was pretty sweet, and it looks like they got it right in terms of post-processing, no?

Have to admit the trailers were probably one of the highlights of the movie (together with the dramatic moon sequence), but once it hits the title screen we return to our regular Transformers programming. 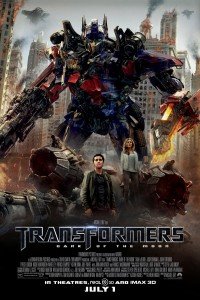 Oh yes, for me it was the moment Ken Jeong gets thrown out of the building that the movie went downhill. It’s not that I love Ken Jeong or anything, and his character wasn’t much different from the others he’s doing right now, but that just felt like “this it, I’m sorry guys, it’s not going to get any better” from Michael Bay.

Really? I found Ken Jeong kinda ‘enh’ this time round. I liked him in Community, but his crazy persona (evidenced in all of his shows) seemed a little… under par.

Exactly – and he was as good as it got. Alan Tudyk did do some better, thankfully.

Come on, every celebrated cameo was just there for the paycheck and you know it – John Malkovich, Frances MacDormand, heck, even Buzz Aldrin! Okay, maybe not Buzz Aldrin – that was actually a pretty cool cameo.

I rather wished that Olivia would appear and suddenly bring us into another dimension. Speaking of which, Fringe was pretty darn good this season no?

I was actually wishing that Walter Bishop would come in and save us.

Or anybody! Like that bunny. Was the bunny in there for merchandising? A rabbit’s leg toy would be amusing. 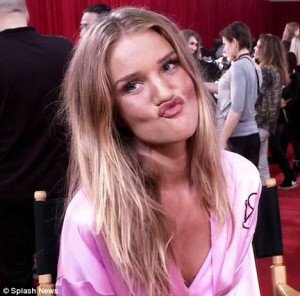 nuuuu she’s not that unglammmmmmmmmm T_T totally more hot than megan fox to me. plus she can convince megatron okays!!

Yeah, she used the word Bitch on megatron lolz.

It’s ironic, but this is exactly how meandering the movie seemed at parts (and I actually kinda want the reviewgitation to remain as such) with the plot diverting here and there to seemingly nonsensical and redundant scenes. Sam Witwicky (Shia Lebouf) looking for a job, his parents coming to visit, the supposed love triangle between him, Carly (Rosie Huntington-Whiteley) and Dylan (Patrick Dempsey), to reintroducing Epps (Tyrese Gibson) – it really all seemed like so much fluff and stuffing and totally unnecessary except to lengthen the nearly 2.5 hour film.

Also, don’t forget the bizarre racial stereotype autobots: par for the course for Michael Bay. And while they weren’t as bad as Autobots-in-da-hood (see the trainwreck that was TF2), one still has to wonder when the Autobots got the time to visit England and pick up English/Scottish accents.

Still, it was pretty damn awesome to have so many of my voice actor heroes back behind the microphone: Peter Cullen (the one and only Optimus Prime) and of course the voice behind movie-Megatron Hugo Weaving (who I can’t wait to see as the Red Skull), but also Charlie Adler (Starscream) and Tom Kenny (Wheelie, the “Headmaster”, returning from TF2). I saw Adler and Kenny in person at SDCC 2010, so getting to hear their voices and imagining them behind the mic was a real treat. Needless to say Frank Welker, despite not voicing Megatron, did chillingly well as Shockwave and Soundwave. But booooooo, Leonard Nimoy, for retiring from acting only to come back and sell your soul. ='( 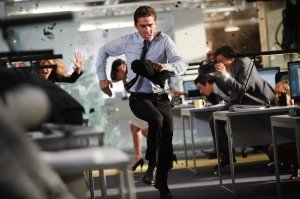 I too will have to admit some parts was cool – mostly the humour, because this time around it held on for dear life each time it threatened to descend into gutter humour, and there were instead some truly humorous scenes that helped keep the movie watchable.

Speaks loads about TF3 when our delineation of pass/fail is ‘no more pee or nutshot jokes’ isn’t it?

No testicular humour makes me a happy man.

And so that means TF3, at the very least, is better than the travesty that was TF2. Folks, what else can we say? Do you want us to talk about motives? Like killing off the very population that will help you rebuild? Or even discuss the… plot?

There’s one? I thought it was slow rock -> pan of booty shot -> METAL AND EXPLOSIONS -> patriotic speech/cutscene (repeat ad infinitum)?

Screenwriter Ehren Kruger still leaves much to be desired, but it speaks volumes when TF2, co-written by Kruger and Bob Orci and Alex Kurtzman, is worse than TF3, written solely by Kruger. But I’m sure there are other factors coming into play, like how rushed TF2 was (the whole reason why Kruger was hired in the first place), or maybe the fact that 3 is not better than 2 (since Orci/Kurtzman wrote TF1). 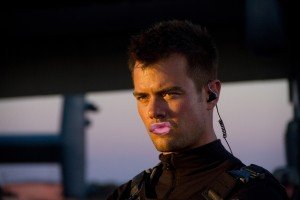 Either Kruger has improved, or Orci and Kurtzman are not as good as they’re made out to be. But maybe you’re right, it seems that 3 of them just couldn’t work together, and then ended up with testicle jokes. And tasers to the nether regions. But even then, it seems as if the new robots introduced were just random creations or just a name tagged to a random grey robot. Shockwave looked amazing, but having the tentacle hentai monster fighting alongside anonymous robot A, B and C when you could have easily given a little fanboy love by naming them (and having them look somewhat like their original) would have made the movie a little more interesting – as it stands, the movie is named Transformers, there are some robots with similar names, and… that’s about it. There were more Star Trek references than Transformers references. The whole show is like Deadpool from Wolverine: Origins.

My final take? Worth catching for the first half, where the subverted concept behind Apollo 11 mission is presented in a very sentimental and surprisingly intriguing manner, making JFK the one president I’ve seen twice on the silver screen in the span of a month, and culminating at the point where Optimus Prime meets Buzz Aldrin, who puts in quite an impressive performance. The movie never improves from that point onwards, but at least you feel like it was a story worth telling.

It’s easy to say that TF3 improved on TF2, and then give Bay a medal for all that he achieved, but deep down inside I’m just hoping the applause the audience gave at the end of our screening was more ironic than joyful. Even ignoring TF2 Bay and the writers haven’t shown themselves to be able to handle the Transformers franchise with any modicum of respect, and with everything made bombastic just to distract you from the plot and with many ridiculous selections throughout the movie it’s hard to say it’s a good movie. It might be a better movie, but it’s still not a good one. Transformers: Dark of the Moon should have been Transformers: Turn off the Dark of the Moon.

1 out of 10. At the very least I did not leave the cinema seething with rage.

Me? There were plot holes, inane one liners and random robot rock-em-sock-em fighting. And it was about 30 minutes too long. But it wasn’t TF2. Which makes ALL the difference to me. Also, they had lots of (probably unintentionally) hilarious moments for me; like the SKELETONIZER! And the FIGHTING FLYING SQUIRRELS! Points for those.

I didn’t feel physically ill after watching Transformers 3, which in the end makes me give it a 5 out of 10. I feel slightly ashamed for actually enjoying such an empty summer blockbuster, but hey, it’s summer right?

So wait, we started off with a slightly intruiging intro, meandered into random nonsense, some of which wasn’t even related to the movie, and then wrapped it up on a barely hopeful note and a below average rating of 4 out of 10.

I guess we ARE as cruel as Michael Bay.

MORE THAN MEETS THE EYE!!