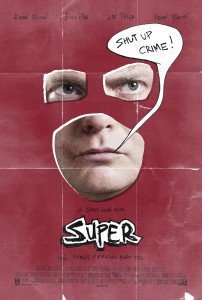 When April 1st came and left, at least one of us feared that yet another genre film might go the way of last year’s Scott Pilgrim vs The World. Fortunately, Super finally receives its local premiere thanks to this year’s Singapore International Film Festival.

It is oddly poetic to be reviewing Super, a film that many critics compare to Kick-Ass in it’s premise. Our site’s first Reviewgitation was for Kick-Ass and while there are some surface similarities, the two films could not be more different. While we loved the execution of the concept of a everyday superhero in Kick-Ass, we could not quite agree if the same could be said of Super.

In Super, Frank (Rainn Wilson) is your normal everyday man, whose wife (Liv Tyler) falls in with bad folk (such as the inimitable Kevin Bacon). It seems like something inside him snaps, and he sees the voice of god telling him to go be a superhero. Along the way Frank (as the Crimson Bolt) gets a fangirl-slash-girl sidekick, in the form of Ellen Page’s Libbie/Boltie.

I guess it’s hard to avoid the comparisons with Kick-Ass, after all, there is only so much distance from Kick-Ass you can get when you talk about ordinary people becoming superheroes, but that’s as far as the comparison goes – they both veer off in very different directions..

It might be similar to Kick-Ass, but it’s even past that on the ‘real life’ and ‘violence’ scale. In Kick-Ass the heroes were still arguably heroes; going up against criminals and druglords. Super contends with druglords too, but they happily cave in the heads of line cutters and petty vandals too. And everyone around ends up asking if the superheroes in Super are vigilantes or just over exuberant, overly violent maniacs. 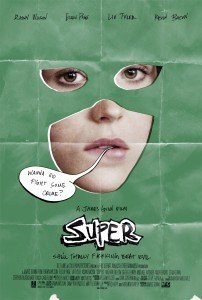 Definitely – the violence is remarkably toned down in Kick-Ass compared to Super. Here the violence is a huge part of what makes Super work, in terms of understanding the psyche of the world the people live in. Which is troublesome, really, given how close the movie toes the line between superheroic fantasties and realism – close enough to trip up and fall over. Hysterical things happen, and we laugh to bits, but then we’re faced with things like something akin to male rape, actual visceral violence and all other things which don’t happen in a “comic book movie”. Some might argue that it is making it more grounded or edgy, but honestly it just feels like two world being smashed together that doesn’t really like that.

Unfortunately, this requirement to suspend disbelief was exacerbated further when the movie ends up evading explanations for certain unrealistic plot devices – like where does he earn all the money to go shopping for firearms?

Exactly. I don’t mind comedy, and I don’t mind violence (be it serious or tarantino-esque), but when it’s mixed together I don’t know what to think. It doesn’t help that sometimes the violent scenes are accompanied by a child’s colouring sound balloon (POW! THWACK!)… I can’t tell if the movie is trying to be light hearted/self censor or if something very wrong is happening in Frank’s head. And we know that’s a possibility, what with him getting visions all the time.

I think it’s quite safe to say that you should not expect a very even tonality throughout the movie – it appears that director James Gunn had trouble reconciling both what he wanted to do, and what he had to do. 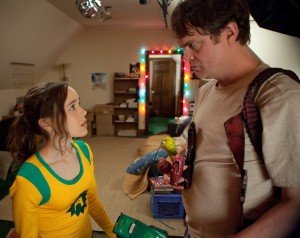 Agreed. I thought the use of stereotyped comic-book typography seemed extremely out of place in a movie that had, for the most part, been extremely grounded in reality. It was especially jarring at the climatic action sequence, and did little to distract from the massive violence we had endured up till that point.

Ellen Page’s Libby/Boltie character is just as worrying. Starting off as a comic store girl, she helps Frank with his superhero research and eventually becomes Crimson Bolt’s very own sidekick; Boltie. It’s only when she starts helping fight crime by assaulting a petty vandal that Frank finds out what he’s gotten himself into.

But that being said, Ellen Page really brings all that she has to this role. She’s crazy and hyperkinetic and all kinds of weird and it even gets a little too weird at times, but with all the earnestness she brings to the role it’s hard not to like her. You do see where her character is going, so it’s not much of a character arc, but you do have to applaud her for going all out – and for being all X23.

Ha! And it’s nice to see a role reversal on the whole Batman-Robin relationship dynamic.

While I REALLY want to like her (and I do!) she gets worryingly psychotic how happy she is stabbing a bad guy’s face in. Or how hot and bothered she gets when wearing a costume. Heroes aren’t supposed to do that. But I guess that’s why it’s called Super and not Hero.

I think Libby’s personality (played to perfection by Page) further seeks to ground Frank D’Arbo by ironically making him appear sane in comparison, despite his supposedly God-given agenda and ludicrous origin story. By teaming up with a complete basketcase, D’Arbo immediately becomes more relatable and sympathetic.

Kudos too must be given to Wilson for carrying the whole film, and being believable as both a loving husband who would do anything to get his wife back, as well as a crazed, sadistic, pipe wrench-wielding vigilante. 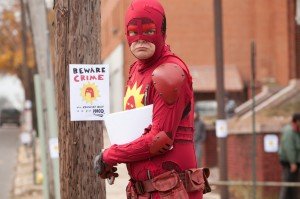 We’ve seen Wilson do crazy often in The Office, so strangely we get to see another side of him we don’t usually do, albeit still crazy – and I did leave the movie with more appreciation of his work. Going home to watch the latest season of The Office did end up feeling a bit weird seeing him back as Dwight.

Unfortunately, aside from these two, the remainder of the cast leave much to be desired. Though Bacon is throughly comfortable with chewing up every scene he’s in, he isn’t given much to do and ultimately comes across no better than a two-bit crook. Even worse are the appearances by Andre Royo (last seen in Fringe as the cab driver that helps Olivia in the parallel universe) who doesn’t do much in his diner scenes with Wilson, and by Linda Cardellini (aka Velma from the Scooby movies) whose throwaway role was a blank-and-miss cameo as the per store owner.

Yeah. Admittedly it was a Rainn Wilson vehicle – but with such a strong cast one does wish it could have done it a bit better. Bacon was, to me, great… but he could possibly just phone it in if he wanted to, given how often he’s done roles like this.

And of course, let’s not forget Nathan Fillion doing Captain Hammer once again, but better.

Moving back to the ‘too schizophrenic for its own good’ topic, I really felt that way at the end. It started off mainly as a comedy, and then took a dangerous turn into serious and violent towards the end. I would have been happy if they kept that track till the end, but I feel like we got shortchanged with Frank’s ending. Yes it’s not a ‘happy ending’ per se, but it’s still a lot happier than it deserved to be.

Super is not a traditional comedy, that much is obvious, and the black humour that permeates throughout could be seen as a retrospective discussion on the plausibility of comic book tropes that we have come to accept, even in shows like Kick-Ass that have attempted to undermine the genre. 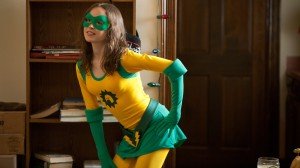 Case in point, the reference to Batman as a guide for the wannabe-costumed crusader – someone who relies purely on tools and weapons to compensate for the lack of superpowers. Presumably, Bats’ ever-increasing popularity is due to the fact that he is the most realistic and relatable comic book character. Super takes that to an extreme, making us question why we can accept and endorse Batman’s violence as necessary, but the Crimson Bolt’s violence as excessive.

To that end, I believe Super had the stronger narrative compared to Kick-Ass, but unfortunately James Gunn did not have the storytelling chops of Matthew Vaughn and the movie ended up filled with scenes that were just too violent for the regular viewer.

I don’t really think it’s the violence that really does the movie in, but the disjointedness in which it is executed. Let’s not forget a lot of the movies these days have way worse violence than what was shown here. Nonetheless, we could see what they were trying to do – and as a comic book fan I did appreciate all the little shout-outs they had, especially when Ellen Page was the one doing most of it. And unlike Kick-Ass, the little injokes did not alienate too much of the audience.

In the end, it boils down to ‘what do you think of the movie’? And well.. I enjoyed the comedy, and I enjoyed the dark and gritty violence. But I’m not sure if I could enjoy them both in the same movie.

That being said, catch it if you’re a superhero fan, and especially if you’re a Nathon Fillion fan. His cameo is probbaly worth the price of admission.

I’ll admit I was really looking forward to this movie, since I posted about it at the start of the year, even to the point of taking leave to ensure that I’d be able to catch it tonight. I had my doubts about a show written and directed by James Gunn, but was hoping the combined awesomeness of Wilson and Page would overcome it.

Well, I think we’re quite agreed in terms of the tonality – but that being said I did have fun watching the movie. Parts of it shone really brightly, and for that I did enjoy it. 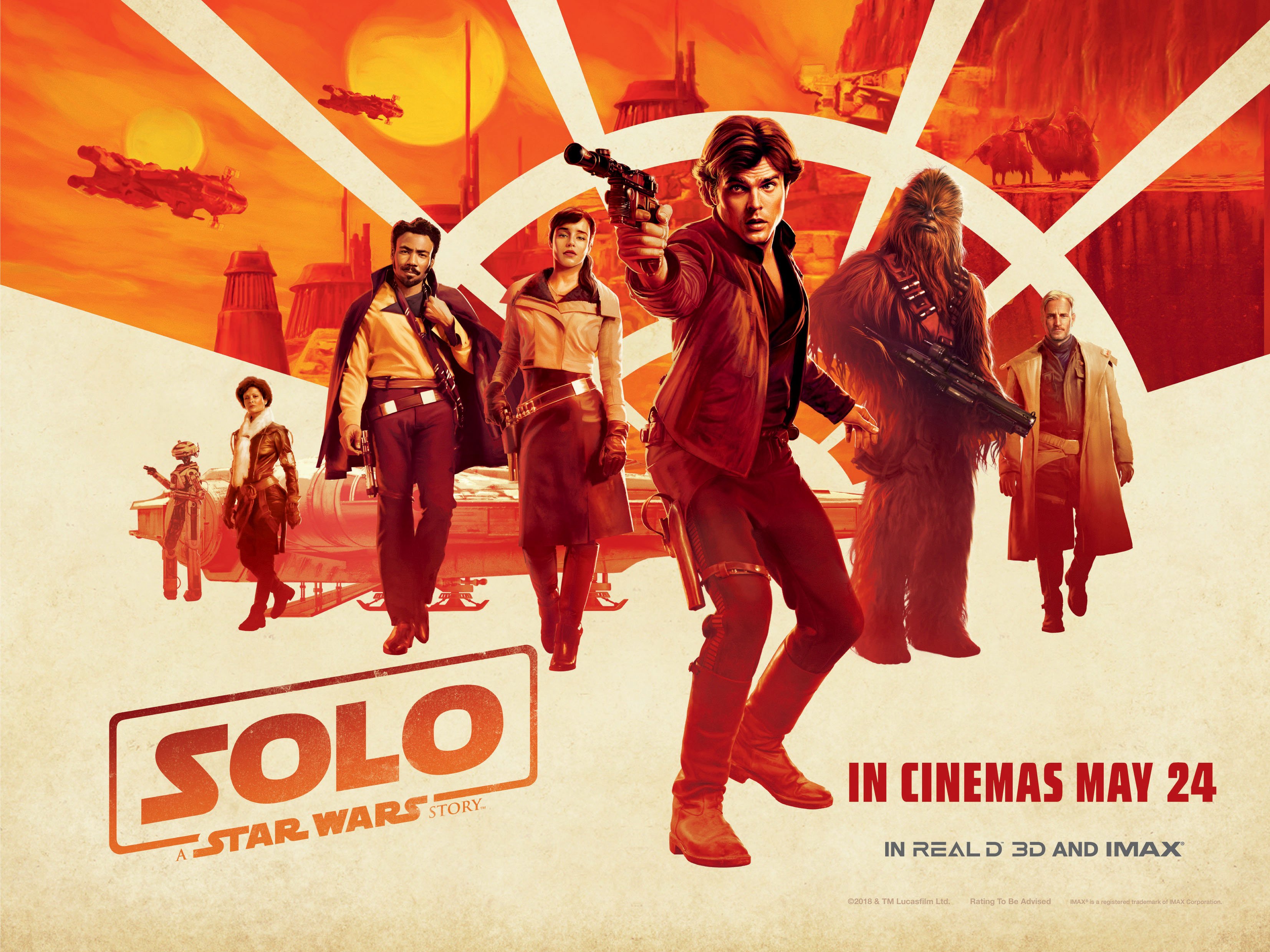