A reviewgitation of Sucker Punch with

Birds in the air, flowers a-blooming… it is spring. And with spring heralds the first wave of blockbusters ready to test the new waters, to salve audiences recovering from mind taxing oscar nominees, ready to absorb throwaway entertainment like a sponge in practise for the next Transformers movie. And it starts with Zack Snyder’s latest movie after that one about the owls and after that other one about owl man and other men (and a lady) and after THAT other one about 300 men, which was after that one about undead men. Except Sucker Punch is about the “mentally insane”. So – not owls. Also, ladies.

A hyper stylised movie (once again), this time focusing on life and escapism in a mental hospital – Sucker Punch reaches for greatness and is just inches away, but like a freshly born owl, has not yet learnt to fly.

I don’t actually remember Sucker Punch being advertised as empowering – I’d have thought that sailor fuku (and the other costumes) pretty much stopped that from being the case. But if it was, then yes, it is as empowering as a double A battery and a flat car battery in the middle of the Gobi Dessert. The push this mentally insane metaphor further – then imagine that a 12 meter tall dragon appears and asks you for a C battery to power his torchlight – which you don’t have. If to be empowered involved retreating into your own world – then this film is empowering. Also, lobotomy. 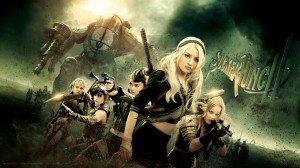 Emma Brown is Babydoll, a girl who was admitted in a mental asylum (tier 1) by her evil stepdad, and who’s slated for a lobotomy. She escapes into a fantasy world of her own making, which for some reason is a 60s era nightclub (tier 2), and hatches a plan with her fellow dancers/insane inmates to escape.

And then, for another bizarre reason Babydoll (tier 2) has this special hypnotic dance that entrances people, and when she dances she escapes into a deeper fantasy world where she’s killing evil oni or steampunk nazi zombies (tier 3). Apparently Zack Snyder watched Inception at the same time that he watched… probably 20 random anime.

Let’s get back to that very hypnotic dance. Let’s just say they should have included dance lessons into the boot camp they had, unless flapping about like a limp fish is considered a dance. But maybe the failed dance is a metaphor for the futility of the mission! And of life! And the movie! EMPOWERMENT, YO!

Zack Snyder is a great cinematographer. He knows his set pieces. The fanboy in me loved the fights. Who doesn’t like giant minigun toting samurai or steampunk zombies or mecha-Usagi? And who doesn’t like awesome explosions, funky CG sets and cute girls?

With the smorgasbord of genres available in tier 3, Zack Snyder was able to go all out really bring his imaginations to life. What he’s very good at is picking moody rock songs to go with the washed out palette, bringing a very strong MTV sensibility to the whole thing. Treat Sucker Punch as a glorified extended MTV and I think you’d be in for a treat.

But I think Zack was confused. He wanted a pretty popcorn movie with all his fanboy tropes; samurai anime action, steampunk WWII, and Buck Rogers space opera. I get that, and I get why every thing explodes into light, steam and circuits when stabbed, gutted or decapitated (it’s probably the least bloody violent movie I’ve ever seen). What I don’t get is why he also wanted some sort of grimdark mental asylum spin as well. I could’ve done a lot less of that.

What I suspect is that he thought of the set pieces first – then somehow had to weave them together. Inception to the rescue! 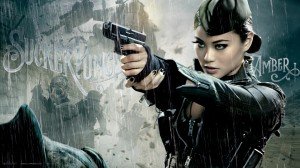 I definitely didn’t go into Sucker Punch looking for plot or acting. I watched the movie for the fights and the set pieces. But while they were good, there definitely could’ve been more. I know I’d probably enjoy watching the fight scenes twice over than watch the whole movie.

Here’s hoping for a director’s cut that’s longer, but with less of the drama bits. With the show making so little sense, making even less sense might help it in the long run. While the plot was laughable when not being abysmal, and the script ridiculous when not shock inducing, I actually felt the actresses did their best in terms of acting – I mean, what more could they have done with the script? And could Snyder have directed them any better?

Suckerpunch was supposed to be Zack Snyder’s stamp on the world; like Tarantino’s Kill Bill. Unfortunately, I doubt it will make as much of an impact on geek culture as Kill Bill. Too bad, too. I like my Steampunk zombies.

Once again I’d end off with a statement that runs a little counter to what I’ve been saying – but let me explain. When Sucker Punch does something, it either does it very well, or very badly – and so it depends on how much of the very badly you can withstand. Sucker Punch, as a story, with… just bad, and not in the wink-wink-nudge-nudge we’re all in on the joke kind of way. However, the style and pizzazz in the action scenes more than make up for the shitty drama in the middle, in fact I stayed awake more during this (incredible!) than compared to the dronefest that was Tron. So yes – if asked which I was to watch again for action scenes, Sucker Punch wins – but when asked which I was to watch again as a whole, I’d go with Scott Pilgrim. Not an option? Whaaaaaaaaaaaaaaat? 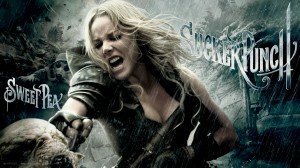 Another indication to Zack Snyder’s intentions might just be how the movie begins, ends, and is framed – it is largely dreamlike in its incoherence, filled with characters that perform multiple roles, just like someone in real life being someone else in our dreams. And it begins, at the Lennox Home for the Mentally Insane, with the song Sweet Dreams (Lennox! Get it? Get it?), where we witness the abuse of a young girl while the line “some of them want to be abused” is sung. Mayhaps, then, this is a critique of the male fantasy come to life, the embodied collective dreams of testosterone, and the exposing of the male gaze as shallow, abusive – and in the darkest dreams of any man, always existing, and we are never free from it – until freedom sets us free. But probably not.

The final thing to note is that if Sucker Punch was made into a game, with the exact same storyline, it might actually win some awards for deep storytelling involving the “mentally insane”, and how freedom will set you free. Not a knock on the gaming industry as it is on the weird gaming press.

Oh! Also: Dancing. There was dancing. That is, if as long as dancing is alluded to, dancing exists. Dancing like fish.