In the midst of the run up to STGCC, we take a break to review Disney’s Rapunzel, showing in theatres now. The naming decisions for the movie is probably as knotted up as the movie’s namesake, having started with Rapunzel, then Tangled, and now Rapunzel: A Tangled Tale. As usual, we have our common gripe of wondering why movie theatres can’t leave well enough alone. Rapunzel or Tangled would have been perfectly acceptable names, but instead we’ve gotten the worst of the bunch.

Still, a title does not a movie make. As Disney’s 50th animated film, as well as one of the few traditional fairytale movies in recent history (the Princess and the Frog being another), Rapunzel has quite big shoes to fill, and it does so pretty well. 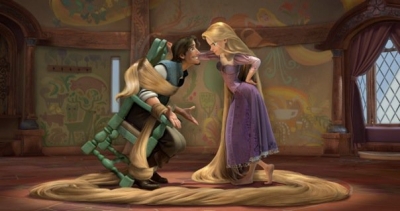 Rapunzel is based on your original fairy tale, but rather than your traditional princess waiting in her ivory tower, features a spunky blonde (Mandy Moore) who longs to explore the wild wide yonder, and with the help of swashbuckling rogue Flynn Rider (Chuck’s Zachary Levi) eventually picks up the courage to live her dream. Both characters are perfect for today’s audience, considering Rapunzel is more teen with mom issues than princess, and Flynn is more Han Solo than hero. Both characters are voiced well, and I have to say that Flynn Rider was a welcome addition; boys can appreciate Disney movies as much as girls and as an awesome male character, Flynn is up there with Aladdin and Simba.

What really makes the movie shine though is its supporting cast. Pascal the chameleon is a great sidekick to Rapunzel, but Maximus the horse is positively sidesplitting as Flynn’s foil, and is awesome enough that he has his own personal mini ending as well. Mother Gothel (Donna Murphy) is equally riveting; maybe it’s because everyone has mommy issues but considering her subtle manipulations of Rapunzel in the guise of protecting her, Mother Gothel is probably one of the best villains in recent memory. Not supervillain evil that’s for sure, just a simple down to earth quiet one. I actually really worried about the heroes’ lives at the climax of the movie, and when you’re worried about character death in a Disney movie, I think the writers did a good job. 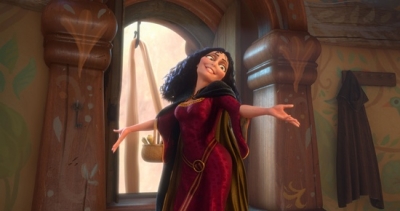 While I still prefer the traditional 2d animation styles, I have to admit that Disney is getting better with their 3d features. Character designs and locations are wonderfully animated and coloured, with one scene (the lantern scene) being particularly beautiful. The contrast of warm lanterns to the azure-purple of the night was amazing. Considering how difficult hair is to animate, they also did a good job on Rapunzel’s. And at the very least a pure 3d movie does translate to 3d (the movie’s new shiny toy to play with) a lot better than a live action feature.

There has to be a weak link in a movie though, and unfortunately for me (as a Disney fan) the songs were the part I didn’t care for. Mandy Moore’s voice was a bit weak, out shone by both Levi and Donna, and considering Alan Menken did the music (Aladdin, Enchanted and Little Mermaid among his movies), I would have expected more.

All in all, a decent movie. As mentioned earlier, Rapunzel is Disney’s 50th animated feature, and while it doesn’t exactly blow audiences out of the water, it is a good enough movie to be worth a purchased ticket and a few hours of your time.