We can build it. We have the technology. But the only way we’re going to be able to do any justice to a Pacific Rim review is by mind melding, two of us dancing in perfect unison. Do we then agree that the movie is awesome like possums? Two possums? Read on!

Kakita initiate neural handshake and risk getting lost in the drift to review Pacific Rim.

Someone asked me what Guillermo del Toro’s new film Pacific Rim was about. I thought about it a bit, and replied “it’s Power Rangers, but with a REALLY BIG BUDGET”. And it’s just about accurate. Just as Joss Whedon’s Cabin in the Woods was a love letter to the horror genre, Pacific Rim is Del Toro’s homage to the Japanese Kaiju movies of yore.

I’d see it as more Ultraman than Power Rangers, but it’s best if you toss all your preconceptions about Kaiju out of the window (especially that Hollywood Godzilla movie). Pacific Rim is about Jaegers – giant mecha – that were designed as humanity’s defence against kaiju – big huge-ass monsters – after they started coming through a dimensional rift and attacking earth. Charlie Hunnam stars as Raleigh Beckett, a Jaeger pilot who has to come out of retirement for a huge battle, with Stacker Pentecost (Idris Elba) leading the teams of Jaegers. Joining the cast are Mako Mori (Rinko Kikuchi), a wannabe Jaeger pilot, Burn Gorman and Charlie Day as scientists, and Ron Perlman as awesome. Thing about Jaegers – they need to be controlled by 2 co-pilots connected by mind meld in a neural drift because one man can’t handle the load alone. (There you have the comparisons with Evangelion, but really it’s not that). Anyway long story short: Robots need two pilots because we need drama, Jaeger vs Kaiju, fight! 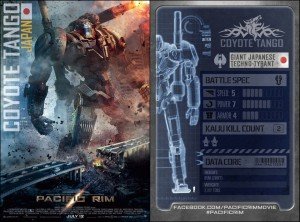 Thing is, this isn’t just a Kaiju movie. It’s also not just your normal summer blockbuster fare either. True, there are all the prerequisites of one: Humongous CGI, relatively terse plot, generic protagonist. But Del Toro draws on some of the old devices from anime, manga and kaiju, melds it with his (great) visual aesthetic, decades of CGI improvement and the result is a wonderfully rich, beautiful and sometimes brutal movie. I especially like how he kept the kaiju roughly humanoid, it’s a cute little easter egg for those fans of old.

Exactly – if Del Toro was stupid he’d be actually showing his love for the genre by getting men in rubber suits to beat on each other Shatner style – instead what Del Toro does is he takes the wheel known (and loved) by many and makes a damn good one. The anti-Pirelli of wheels, if you get my drift (double pun!). It’s a little pity that the Raleigh Beckett can be summed up with “generic protagonist”, but really, it doesn’t become a big deal and you realise who the real stars are. And Pacific Rim’s not just a kaiju love-letter, mind you – Del Toro actually manages to throw in tons of familiar things from movie-dom – tropes or cliches if you will – but makes them all work.

Yeah. I could see all the character archetypes in a Gundam or Macross movie. You have your main protagonists (both male as female) with their broken pasts, the brusque but fatherly boss who happens to be African American (bonus!) (with the rousing Independence Day speech – Direcow), the cocky douchebag male foil, and the scientist technobabble side characters. Amazingly enough though, as stereotypical as they are, you actually get to care for them quite a bit. I especially started REALLY liking the scientists. As much as the pilots Mako and Raleigh get their romance on, so do the scientists get their bromance on. And of course, Ron Perlman is awesome. But you already know that. 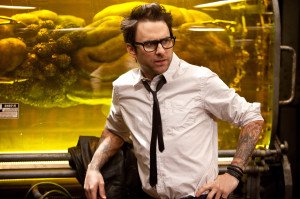 The thing I also liked – to be quite honest given how much Del Toro stuck to a sort of awesome paint-by-numbers, the movie subverts those expectations when you least expect it (the most extra-irksome way Del Toro could have ended it didn’t happen. I AM SO THANKFUL). But cliche or not, Del Toro definitely had a lot to do to bring the movie to life. The script by Travis Beacham (Clash Of The Titans) isn’t going to win awards so it’s really about the direction of the actors, the design of the Jaegers and Kaiju, and that amazing sense of scale that Del Toro brought to the screen. This, my friends, is how you do an IMAX movie.

All sound and visuals, signifying SO MUCH FURY. (This is also incidentally how Real Steel should have looked like.) The fight scenes and the visual direction is definitely what you paid good money to watch, and you definitely get your money’s worth in droves. The plot really is just a reason for you to move from one fight scene to another, but it gets its job done well enough. The only problem I had with the visuals though was that because a lot of the fights were done in the dark, sometimes it got a tad hard to tell Jaeger apart from Kaiju. Honestly though, it was probably due to our poor seat position and possibly the 3D than the movie itself.

Watching in IMAX? Don’t sit too close to the screen. This is as wide-screen as action gets, and every inch of the screen is filled. If you spend all your time staring at the centre you’re likely to miss out some of the subtitles at the corner. Not so much a flaw of the movie – but a flaw at how squeezed our IMAX cinemas are.

I also didn’t NEED the 3D, but I have never been a proponent of 3D. James Cameron’s Avatar remains the only movie I insist needs to be watched in 3D, but Pacific Rim does a decent enough job of letting the 3D flex its muscles; there are a LOT WORSE movies to watch 3D in. 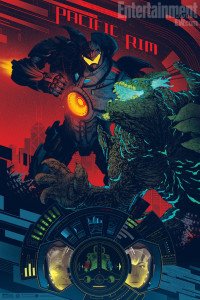 And with all the fancy, pretty CGI by ILM you get a great, great sense of scale. I think what struck me throughout the movie was really how big those guys constantly felt. This is massive battles on an epic scale, and unlike, say, Man Of Steel, these battles felt like they mattered, and the cities getting destroyed, it felt like there was a lot at stake. The apocalypse truly needed to be cancelled.

Definitely. While this movie probably isn’t going to win any Oscars except best effects, Pacific Rim is literally the largest movie this year, thanks to the Jaegers and Kaiju. A rocket-punch of a movie.

While it still boils down to Jaegers vs Kaiju, leaving it as that would be doing it a disservice since it feels like that bit more. Sure, all plot points work together to serve the action, but it’s far from a dumb movie – so you don’t have to leave your brain at the door, it’s never stupidly insulting as some dumb movies are. Crafting everything together really obviously took a lot of love from Del Toro and gang, and there’s also a lot of little gems scattered throughout the movie that elevate it beyond your summer action popcorn movie – the silly grin I had exiting the cinema, and how dry my mouth got just have it agape throughout is a testament to that.

Pacific Rim opens today. Go get tickets before the apocalypse!!