Sony’s latest exclusive for the PlayStation 4, Horizon Zero Dawn (HZD), is an open-world third-person shooter. I wholly recommend it: It’s good enough that you should buy a console for it. Want to know more? Read on.

Horizon Zero Dawn is set in post-post-apocalyptic Earth. You play Aloy, a headstrong outcast of the Nora tribe. The Nora are hunters in a world where humanity has been wiped out after a cataclysmic event, an event which spawned the machine-infested world that we see in the game. At the start of the game, her tribe is attacked, and you spend the rest of the game delving into remnants of the past in order to solve the mystery of who attacked her tribe. (The story goes a lot deeper than this, but it’s safe to say we go spoiler-free.)

HZD’s greatest attraction is its world building. I am a big fan of post- and post-post-apocalypse stories. The concept of technology so advanced it is indistinguishable from magic has always been dear to my heart, and I love being able to delve into world-spanning mysteries buried in ancient ruins and ‘dungeons’. HZD is such a game.

Guerrilla Games, developers of the Killzone series, have done an amazing job with breathing life into the HZD world. I’ve stumbled into totally random fights between humans and the techno-organic beasts, and I’ve been able to use that to my advantage. The fact that the whole world seems to interact with each other independent of you really gives you the feeling that it is a world that could exist, in spite of the huge monstrosities walking beside you.

No lie, this is how I felt in HZD.

The creatures of Horizon Zero Dawn are the main draw of the game, and how could they not be? They stalk and stride, beautiful synthetic simulacrums of real world animals… they really seem alive.

The rest of the world is just as lovingly rendered. Taking place in an area around what used to be the (real-world) Rockies and the Grand Canyon, HZD is full of awe-inspiring vistas of mountains, mesas and valleys. Be it grassy fields or rusted ruins, each location in HZD is stunning. It is so beautiful that while I usually like the HUD displaying as much information as possible, I set my HZD options to dynamic, to ensure as little clutter on screen as possible. I spend so much time in the game just marvelling at the world, taking pictures of the environments and animals alike.

And you should definitely take pictures.

It is a testament to how beautiful the game is that each and every one of the pictures seen here are not produced promotional material, but screenshots that I took while playing.

Horizon Zero Dawn’s photo mode allows you to do almost anything you want. You can change the position, direction and aperture of the camera. HZD even goes as far as giving you options to change the time of day or apply Instagram filters before you share your shots. I’ve probably spent a few hours pausing the game at an opportune moment and trying to get the perfect shot. And there are many more beautiful photos out there.

Unfortunately, not everything in Horizon Zero Dawn is beautiful.

Don’t get me wrong, the people in Horizon Zero Dawn are beautiful (especially in screenshots). However, the Uncanny Valley really hits HZD hard here. Guerrilla Games gave rendering conversations a good try, and I definitely would rather see properly mo-capped faces rather than procedural gum-flapping in many games, but there is usually something that seems off whenever the humans speak during conversations. The (relatively) forgettable voice-acting and dialogue don’t do anything to help.

Dialogue trees with NPCs serve more as just exposition and info-dumps. While I can choose how a conversation goes, I still end up in the same place regardless. And while Aloy is a great protagonist, the focus is more on the world around her, rather than her character development. I appreciate world building, but would have liked to have some of Aloy’s conversations actually make an impact on the world, or at least herself. That said, it all comes together at the end, especially when Aloy’s past is fully revealed.

There are also tons of side quests to keep you busy – very, very busy in the huge open world. To be honest most of them aren’t very memorable, but I’m more than happy to do them because it allows me to explore even more of the amazing, captivating world out there.

Running, Jumping, Sliding into your Heart

I tend to prefer strategic and turn-based games, like XCOM 2, Civilization VI and the like. I do play ARPGs like Mass Effect and Dragon Age Inquisition, but that’s mostly due to the story and world building more than gameplay itself. I don’t even usually play open world games – and only got a PS4 recently – and so it means a lot that while I came into Horizon Zero Dawn for the world, I stayed for the game.

Horizon Zero Dawn combines a whole slew of different ARPG concepts, but it is essentially an open world Monster Hunter meets Tomb Raider. As Aloy, you run, hunt and climb throughout the world. You can take down the metal creatures, but they are not your only source of supplies. Hunting animals as well as foraging are also important in keeping Aloy well-stocked. Supplies are used to craft ammo, upgrade your bags, and sometimes even as items to trade in for better armour and weapons.

Other ARPG mechanics also abound. You have stealth take downs and can clear enemy camps to turn into settlements. There even is your climbing and acrobatic set piece in order to reveal more of the map or procure a collectable. What is different is how smooth and satisfying running and climbing is.

Even better is how beautiful everything is once you get to the top. Only in Horizon Zero Dawn will your ‘radio tower’ be a lumbering ‘Tallneck’, a radar-brontosaurus hybrid. And only in this game will you want to take a photo atop it in order to commemorate your accomplishment.

Combat is just as rewarding. Fighting in HZD is of the Monster Hunter variety. Your ability to damage and fell the robotic dinosaurs in Horizon Zero Dawn is not linked to your level, or ‘stats’ like in other RPGs, but to your own accuracy and knowledge of the game and how the creatures move. Most attacks are embarrassingly weak, and any creature is able to down Aloy (even at the end game) in a fair fight. But Aloy is hunter, and you’re not supposed to start a fair fight. You are supposed to learn the habits, and each type has a unique fighting style and series of tells.

What also helps is how satisfying it feels when you land an arrow. There’s a satisfying recoil, while the ‘thunk’ sound registers the hit – it makes me want to get into fights just to land the right hits and incapacitate a beast early.

Your repertoire of weapons, traps, and elemental attacks are integral in surviving combat in HZD. I have had fights go from unwinnable to a cakewalk, simply because I found a creature’s weak spot. Shoot off this component to render the creature blind. Overload the power cell with an electric attack to stun and deal damage. Lure the behemoth into an explosive trap. You are meant to use every weapon in your arsenal during the fights in Horizon Zero Dawn.

That is actually one of the niggling points of the combat and inventory system. With the console controls, Aloy only has access to 4 of her weapons, with their related ammunition. If you want access to more, you’d have to pull up the inventory management system and exchange one of the weapons you’re using with the one you want, before being able to access the new weapon in combat. It adds a bit of strategy to combat, but when you’re taken by surprise, heading into the menu to switch a weapon does ruin the momentum.

The inventory system could also be improved. I would have appreciated some way to sort and manage my inventory. It does have one good idea – you can ‘craft’ your own quests for equipment you wish to buy. For example, if you lack a certain material needed for a coveted item, you’re able to record the items you’re missing and turn it into a quest. 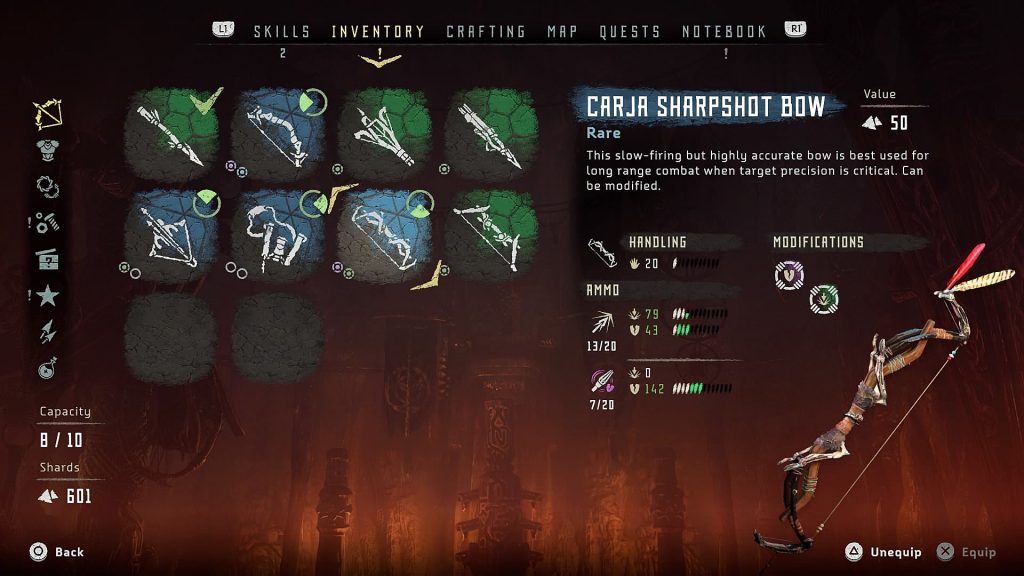 Other niggling points include the fact that as exciting dino-hunting is in Horizon Zero Dawn, human-hunting is much less so. But it’s not a bad thing – after the nail-biting robot fights in HZD, some cakewalks are a welcome relief. Lastly, I would’ve appreciated a beefed up melee system. While Aloy is an archer and a hunter more than a melee brawler, your options can get severely limited once you’re left with only your staff to defend yourself in close-up fights. Some weapons which come later help mitigate this, but you’re probably going to be rolling and running out of the way so you can use your bow again. Some sort of parry system would have been nice, but then again it’s not like you can parry a techno-rhinoceros attack.

Still, Horizon Zero Dawn is a damn good game, and an early nominee for game of the year. It has its shortcomings, but they are minor ones, and barely dent my enthusiasm for the game. There have been other great games so far this year, but Horizon Zero Dawn is consistently good. There is nothing that warrants more than a nitpick on my part. Every day, I count down the hours until I can return to Horizon Zero Dawn, and as the sun sets in game, I think to myself… ‘one more day before I set up camp’. 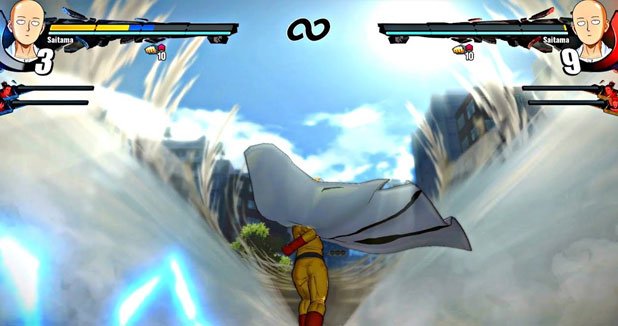