I HATE horror movies. The last time I caught one in the cinemas was The Ring, and I had three sleepless nights after that. I didn’t help that I received a phonecall at 2 minutes past midnight that day asking if I were ok: Well, thanks but no thanks! So you can imagine the kind of mixed emotions I had when I found out that Joss Whedon had a new movie (YAY!), which was a horror movie (“Wilhelm scream”!!).

Still, The Cabin In The Woods … If you haven’t heard, the is the Joss Whedon movie that’s coming out right before the other Joss Whedon movie (no prizes for guessing which one). Finally released after studio hell (it was made in 2009), it does come out right in time to ride the wave of The Avengers. But then again, does it need it? 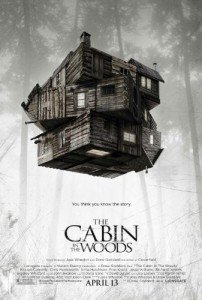 I would usually place the trailer right above, but honestly, the less you know about the movie the better. It’s not, say, some crazy twist ending like what you got in the Sixth Sense, but nonetheless enough of it is not what you expect that it’s best to go in with an open mind. I’ll leave it right here and say: Yes, you should watch this movie. Anything else beyond this line can be construed as spoilers in some way, so, once again, if you want to go in with an open mind, stop here and just go get yourself some tickets. I’ll go increasingly spoiler-y as the review goes on, just in case you want a good exit point. 8.5/10.

The Cabin In The Woods is a film about a group of 5 friends who have decided to go off for a weekend in a secluded weekend, and then get into all kinds of scares before dying etc – at the very basic level, this is your usual horror movie. 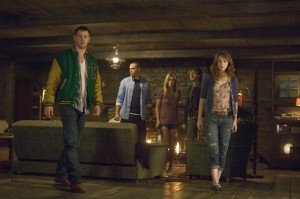 Now, all of us have heard of or seen some of the recent spate of horror movies. Quite simply, a group of stereotypes enter a secluded area, get attacked, blah-de-blah. You’re really going there more for the blood than the tension (I might be wrong, having avoided ALL of them. Do forgive me). At any rate, Cabin features the same group of stereotypes that Scream itself had somewhat covered: The whore (Anna Hutchinson), the jock (Chris Hemsworth), the stoner (Fran Kranz), the sensitive guy (Jesse Williams) and the virgin (the amazingly cute and stunningly pretty Kristen Connolly). No prizes for guessing who dies in what order.

What Whedon then does to that order is another story altogether for one simple reason – these actually aren’t your actual archetypes. The whore is a pre-med student, the dumb jock is a sociology student … Each of them, upon entering the cabin, end up acting ways that you would expect because of the genre, but not ways that their characters should act.

All this is possible because the teens have been chosen by a mysterious company that happens to be overseeing their entire trip. That’s right – from manipulating Jules’ (the whore) hair-dye to pumping in pheromones into the ground at a secluded forest to changing the drug composition that Marty (the fool) smokes – the entire horror setup is fixed from the start. Whatever the characters do, even if they suddenly manage to gain a clear mind, even if they find a way to escape, the control station manipulates them or the situation such that hope for them is slowly drained away. The two men at the control station are pretty much Whedon and Goddard – the lives of their characters are in their hands. 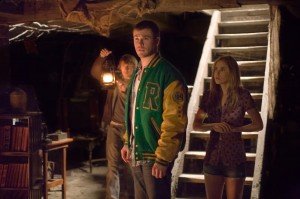 Except there’s a bigger problem at hand. The creation of all these horror situations worldwide has happened for only one reason, and that’s Whedon’s prestige. I could tell you what it is but honestly it’s not difficult to guess while watching the movie. Like I said, this isn’t about atwist ending, this is about how they get there, whether it’s the characters who are getting killed or those in the control room taking bets on their lives. That’s the beauty of the movie – it’s such a compelling journey that even with my eyes covered in fear half the time you really wanted to know how they get through with it. The creators have made a movie where you care about the characters and their motivations, whether they’re the controlled or the controller, and that’s why the movie stands strong.

There’s a lot of amazing moments that give the film an extra kick. The part where they get to choose their own method of death in the cellar is really quite clever – each character is attracted to a certain item in a cellar stuffed full of various items, and whatever item gets fully triggered first will activate the monster that’ll attack them. In this case, they got the redneck zombie family. The main thing here is to pay attention to everything in the room and recognise all the famous horror monsters from various films. It was a lovely touch, if I weren’t so afraid.

One of the best parts of the movie is seeing how the Japanese counterparts of the operation have their own version of horror, and instead of the Americans and their stereotypes, a classroom full of kids is attacked instead. It’s a creepy moment at first, but the juxtaposition is just delicious.

If anything, the weakness in the movie is its strength – while it does stand on its own, it really expects you to know the genre as much as they do to really get the punch. The twinkle in their eye, the wink wink nudge nudge is a whole lot stronger if you’ve studied film, or the genre. Not to say that everybody else won’t get it – there’s a great horror movie in there that’s just wrapping for something else.

Now, if you think about it – Since both The Avengers and The Cabin In The Woods was written by Joss Whedon, if you haven’t ever had a taste of his work you’d now know by now what to expect in the first mega-movie of the summer. It’s going to be funny (wickedly funny at times), it’s going to be tense, it’s going to have wonderfully drawn up characters, it’s going to have tons of details that really enhance the movie (check out the title card for Cabin when it appears) and it’s going to be treat its genre respectfully and lovingly. Joss Whedon is obviously a huge geek, and now he has given horror geeks a reason to believe that there is still life in this stale, torture-porn-focused genre.