So this is what happens when you spent a whole month playing cards and board games. You get a giant stack of comic books sitting in the corner, waiting for you to read them! It’s get to it with a quick look at some of last week’s releases, my rather incoherent musings and as always, there be spoilers ahead! 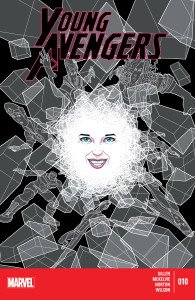 Young Avengers #10. Oooohhhh, how I so really wanted to love this series by writer Kieron Gillen and artist Jamie McKelvie. There were rave reviews everywhere; all the hip kids liked it plus its got “Avengers” in the title. How could I not like this title?

Well, I’m still trying to collect my thoughts here so forgive me if I sound like I’m rambling away. First let me just say that this is actually a darn good series; we got popular teenage heroes in action by one of the hottest creative teams in the business right now. There’s a ton of nail-biting drama and great writing. McKelvie’s vibrant art will just blow you away. I would seriously recommend this to almost anyone to at least try out a couple issues as I can definitely understand why folks would like it. But it’s just not my kinda thing, I thought it was then it got me feeling old, really old.

Now let me explain, I heard about this second volume of Young Avengers when it was first announced about a year ago, and how everyone both young and old went nuts about it. It got me thinking of the excitement and enthusiasm that awaited me when I was a mere teenager following the adventures of another young superhero group The New Teen Titans from DC Comics almost 20 years ago. I wanted to relive that high again. I suppose you could say I needed to go back in time and recapture my youth or feel like a kid one more time.

Guess what they say is true, you can’t go home again. On one hand, I can understand why it’s a hit, having teen Loki putting the team together was brilliant and the character dynamics is amazing. But on the other hand, I couldn’t relate to it. After 10 issues, I wanted more while still looking for a hook to pull me deeper into the story. I was hoping for more storylines to wrap up and new ones introduced.

Rightly or wrongly, part of me was trying desperately to compare it to Wolfman and Perez’s groundbreaking New Teen Titans. I felt there was just a bit too much soap opera than superhero conflict. I’m all for drama in my storylines but I just wished there was less modern teenage angst. It’s kinda like staring at a beautiful work of art but somehow you just can’t seem to appreciate it. Know what I mean? I’m thinking maybe it’s cos I’m older now, and this title is telling me that scenes of teenage superhero hijinks just aren’t cutting it for me any longer. 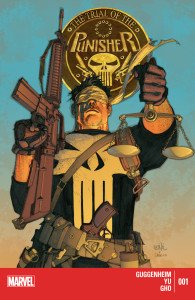 Punisher: The Trial of The Punisher. I thought this was a continuation of Greg Rucka’s critically acclaimed Punisher: War Zone mini-series that ended earlier this year, with the Punisher already under arrest but it’s not. It’s a new 2-issue limited series by writer Marc Guggenheim and artist Leinil Francis Yu that opens with Frank Castle aka the Punisher turning himself in at a New York City Police Station.

Guggenheim has managed to put Castle in a unique situation with the vigilante in a courtroom fighting against the legal system instead of in a street alley with guns blazing. But that doesn’t mean there’s any lack of action here. We still get a gripping storyline, a brutal prison fight scene and great art by Yu. I much prefer his style here in an urban setting than when he’s doing alien superhero stuff like Secret Invasion or Avengers.

Of course the big mystery is why exactly did Castle turn himself in, and it’s obvious by the final page that things aren’t what they seem. Good solid crime drama and only 2 issues long, so try grabbing it. 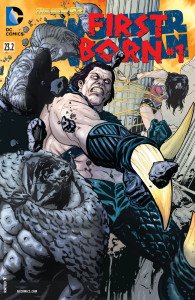 Wonder Woman 23.2: First Born. DC Comics had a thing going on last month where every issue was taken over by a super-villain origin story. It was a tie-in to their big crossover event Forever Evil that had all the villains running loose and our heroes beaten back into hiding.

After skimming through most of last month’s titles, I think I can pretty much sum up the origin stories as either “I’m not really a bad guy but a misunderstood victim of society,” or “I aim to be biggest meanest bad ass in the world!” Thankfully this latest issue by regular writer Brian Azzarello falls nicely into the second category.

This is nasty stuff on a biblical level as we trace the bloody life and times of Zeus’ and Hera’s First Born child. It’s a straightforward tale of how the First Born enslaves the ancient world in an attempt to storm Olympus and claim his rightful throne. I liked how Azzarello has added layers of depth to flesh out First Born’s character. Worth checking out as I believe it also serves as a starting issue to new major Wonder Woman storyline.