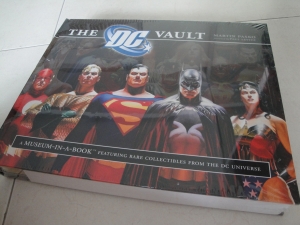 Shopping for a fellow geek is always fun cos you usually end up looking at tons of stuff you like and with Christmas less than a month away, I figured I’ll do a little review on something I received last month.
The massive DC Vault was an early Christmas gift from a close friend, I know it has been out on the shelves for a couple years now but it’s truly a timeless treasure trove for any comic book fan. I believe you can still get your hands on a copy of it at book stores like Kinokuniya or Popular, if not there’s always online.
Now why is this a must-have for every comic book fan? Well, like it says on the back, “whether you have been collecting Superman comics since the 1930s or have just discovered the amazing Sandman saga, you’ll revel in this vibrant treasury!”

Veteran comic book writer and editor Martin Pasko has put together an incredible array of historical facts with a colorful, eye-popping, jaw-dropping selection of DC Universe memorabilia, some never-before-published till now.
The chapters chronicle DC’s rich history from the 1930s with publisher Malcolm Wheeler-Nicholson, blazing through to our DC heroes’ role in World War II, the hard-hitting social stories of the 1960s, and then to some familiar faces and stories from the last decade. Every page is like a dial on a time machine, filled with fascinating secrets and comic art masterpieces from every stop in the time stream.
But to me, the real stars of The DC Vault are the exciting two dozen or more collectibles that were reproduced just for this collection. A 1943 Batman mask, a gorgeous DC Universe jam poster, Wonder Woman bookmark, rare promotional materials, art sketches, handwritten notes and memos from editors, they are all in there. My favorite has got to be the handwritten Crisis on Infinite Earths death list. Poor Supergirl.
Well, you know what they say about a picture is worth a thousand words so here are just some of the gems you’ll find in The DC Vault. 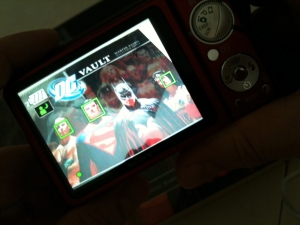 Oh, while taking the pictures, I now know why Batman wears a cowl; you can’t target him at all, not even with a camera. No wonder bullets keep missing him!
Tags
Comics DC Comics Reviews