For this week’s Library Picks, I thought we’d look at some of the more popular independent titles instead of the usual stuff from the Big Two aka Marvel and DC Comics. Publishers like BOOM! Studios, IDW, Dynamite and Dark Horse have some really good titles in our libraries, and here are just some of them. 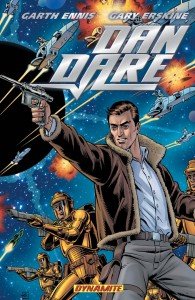 This is Battlestar Galactica meets the Battle of Britain. Famous British writer Garth Ennis is at his best here, not his ultra violent, gritty best like his Preacher or Punisher MAX but his war story best.

Ennis takes a classic British comic book space hero from the 1950s and updated him in one of the best British war stories ever, so what if it’s set in the future and in space. The Dan Dare Omnibus is a complete story that opens with retired space hero Dan Dare doing the Obiwan-thing and living in self-imposed exile on an asteroid. When his old enemy the Mekon returns with an army and a super secret weapon, the British government who pretty much is in charge of what’s left of Earth, calls Dare to save the day.

Like all good war stories, this isn’t just about explosions and shoot-outs, it’s an epic tale of courage, sacrifice and how keeping the old British stiff upper lip may just save one’s life. 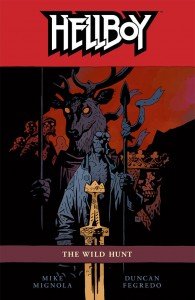 An ancient evil threatens Britain and the world, and our hero who is in a self-imposed exile situation is called back into action. Hmmm, looks like we got a similar theme going on here in this new Hellboy trade paperback.

If you have been following the Hellboy trades in our libraries, you’ll notice that The Wild Hunt appears to be the culmination of a bunch of Hellboy’s earlier storylines. Well, the earlier volumes saw Hellboy struggling with his demonic destiny while doing what he does best, and that is of course beating up evil supernatural forces around the world. Oh, if you can, try to get your hands on Hellboy: Darkness Calls before reading this. It helps.

Now in The Wild Hunt, he finds himself back on the British Isles where he finally learns his true origin whether he wants to or not. While at the same time, a newly resurrected Queen of Blood is gathering an army of giants and other mythological creatures to destroy the world. Creator and writer Mike Mignola did a good job tying it all together, characters from earlier adventures show up to continue old feuds or build new relationships, while artist Duncan Fegredo continues to deliver the goods on every page.

Only thing I wasn’t all that crazy about was the slightly drawn-out bit in the middle, where we have Hellboy dealing with his inner conflicts, suppressing his rage, questioning his own actions etc. All right I get it, he’s a tormented soul and all that but come on, let’s move the story on a little faster here.

But still, this is a must-read if you have been following the earlier volumes;expect plenty of action, interesting reveals and a very tantalizing ending. 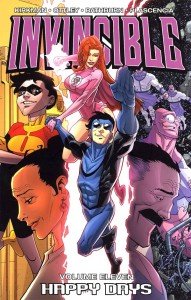 One of the best ongoing superhero series out there that’s not done by Marvel or DC Comics. Created by Robert Kirkman with art by Ryan Ottley and Jason Howard, Invincible is the name of our resident half-alien/half human teenage superhero.

This newest trade paperback addition to the library continues the saga of how Mark Grayson aka Invincible is coping with life on Earth, his relationships with his human mom, superhero girlfriend, little alien stepbrother and the rest of the super-powered folks in the world. And there’s also the major subplot involving Invincible’s father (good guy-turned-bad guy-turned-good guy again) Omni-Man in space and an army of invading aliens.

Now there’s no recap or the proverbial ‘previously in Invincible’ in this trade paperback, it collects issues 54 to 59, so it’s not exactly a reader friendly entry point for those who aren’t familiar with the title. But don’t fret; I spotted Invincible Ultimate Collection Hardcover Volumes 1 to 4 (issues 1 – 47 plus extras) in our libraries.

So if you are already borrowing the earlier volumes, the library has updated its collection. If you are not, do yourself a favor and at least pick up the first hardcover volume. You won’t regret it!