Now it’s no surprise that lots of comic book fans are also ardent toy collectors or action figure collectors to be exact. So I figured I’ll share some news on the latest releases that are out in our local stores right now. 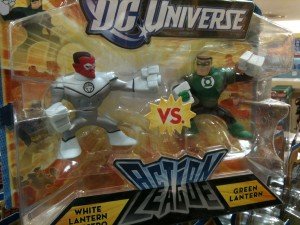 Spinning out of Batman’s Brave and The Bold Action League mini-figures, the first wave of DC Universe Action League finally shows up at our local retail department stores, after its debut at last year’s San Diego Comic Con. 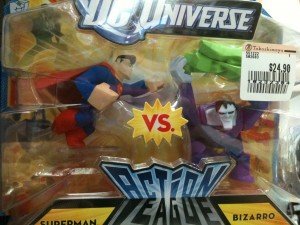 This cute little 2-inch line-up comes in pairs, a hero and a villain, and are pretty cute. We got Superman and Bizarro (with removable chunk of Kryptonite), Flash
and Captain Boomerang, Firestorm and Deathstorm, and finally Green Lantern and White Lantern Sinestro. 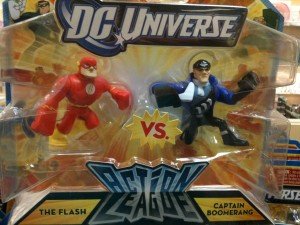 Unlike the equally mini Marvel Hero Squad figures where EVERYONE, good guys and bad are all smiling and looking cutesy, the DC villains stay mean when they have to. Thank Krypton for that! 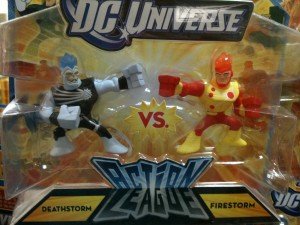 Big pluses go to a decent-looking paint job and an interesting, up-to-date line-up with characters from last year’s Blackest Night. I guess limited articulation is expected with these little guys as in only neck, shoulder and waist swivel joints for most. However the price is something I have to gripe about, retailing for S$24.90 is a bit on the high side.

Next up are a couple of Walmart exclusive two-packs spotted at retail stores. Going for a whopping S$79.90 a pair, these are straight re-releases of figures from previous DC Universe 6-inch waves, no repaints or new sculpting here. 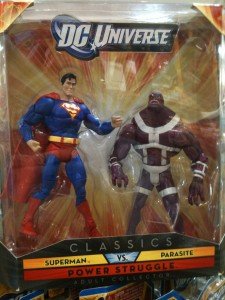 For those who missed the Parasite from wave five of the Superman series a few years ago, this is your chance to get him. Superman? Meh, you can find him at most flea markets so if you are buying this pair, you are basically going to get it only for the Parasite figure which is a really cool addition to any collection. 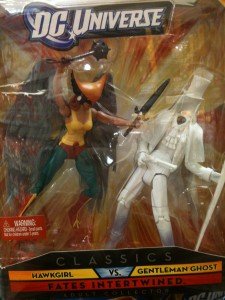 Hawkgirl and Gentleman Ghost are both rather hard to find these days too. Both were from the DC Universe wave eight collection about three years ago and looking at this new box, it seems like the only missing accessory is Hawkgirl’s spear that was included in the original packaging. Real bummer!

Having bought them when they were first released, I can say that these are excellent figures especially Hawkgirl whose wingspan can open up to an impressive 13-inch wide. There aren’t many poses for the Gentleman Ghost but he definitely cuts an inspiring look, all white with that top hat, cane and pistol.