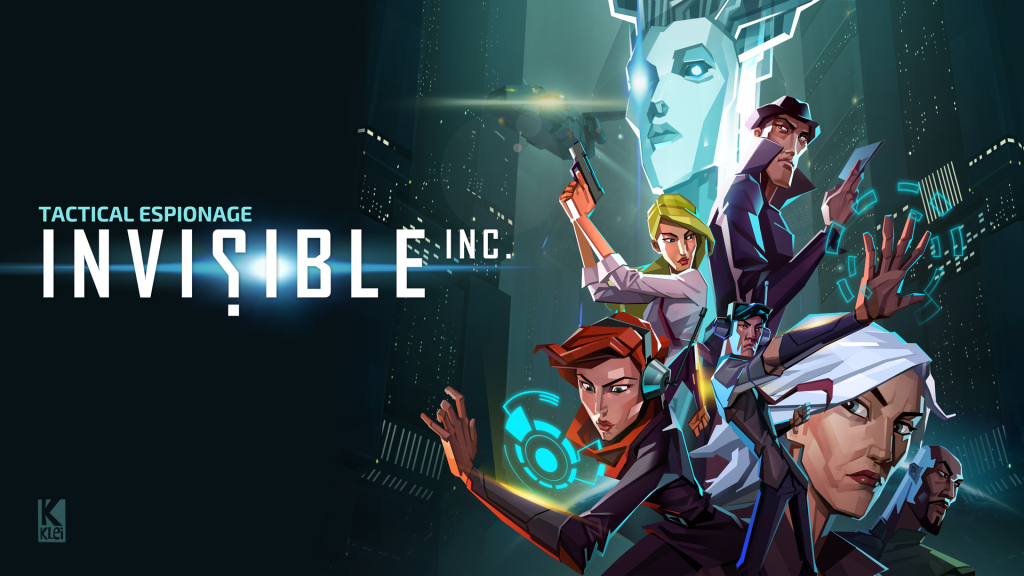 I usually don’t play Stealth games. Like flight sims and fighting games, I find I don’t have the fine finger control and twitch reflexes to play them well enough to enjoy them. However, Klei’s Mark of the Ninja was one of the few (maybe even the only) Stealth games I absolutely LOVED, and the game earned Klei a life-long fan. When I found out there were making a turn-based, tactical stealth game? I was SOLD.

Invisible Inc is that turn based, tactical Stealth game. It is also a roguelike. The easiest comparison would be to mix up XCOM with FTL, drizzling in a bit of Mission Impossible Ghost Protocol and Deus Ex to taste. And it is a good game.

The game’s premise is simple. Invisible Inc is an independant espionage outfit in the dystopian near future, and you start just after it has been compromised. Your HQ is lost, with barely a few agents left, you play the operator, as you scramble for clues about who sold you out, and resources to take the fight to them. You have 72 hours before the corporations close in on you and your team. Go.

The fact that Invisible Inc drops you right in the thick of the action means that tension is ALWAYS HIGH. Short of the optional tutorial, everything is life and death, and in absolutes. For example, if an enemy guard sees your agent, and you move without breaking line of sight, he shoots your agent, which is always an incapacitating blow. This is unforgiving, and this is great. Why? You immediately know the penalty of failure. No futzing around with d6 damage, or critical hits. Your agents go from perfectly healthy to down in one blow, and because of that, you know NOT to go head to head with the guards.

This doesn’t mean that you do not have tools to deal with guards, mind you. If you manage to move into an area where line of sight is blocked, the opponent can’t draw the shot. If another agent sneaks behind the guard, you have means (both lethal and non-lethal) to deal with him. If an agent goes down and the guard is subsequently dispatched, and if you have the appropriate item, you can resuscitate your downed agents. However, the two most important tools to your survival are stealth and information. 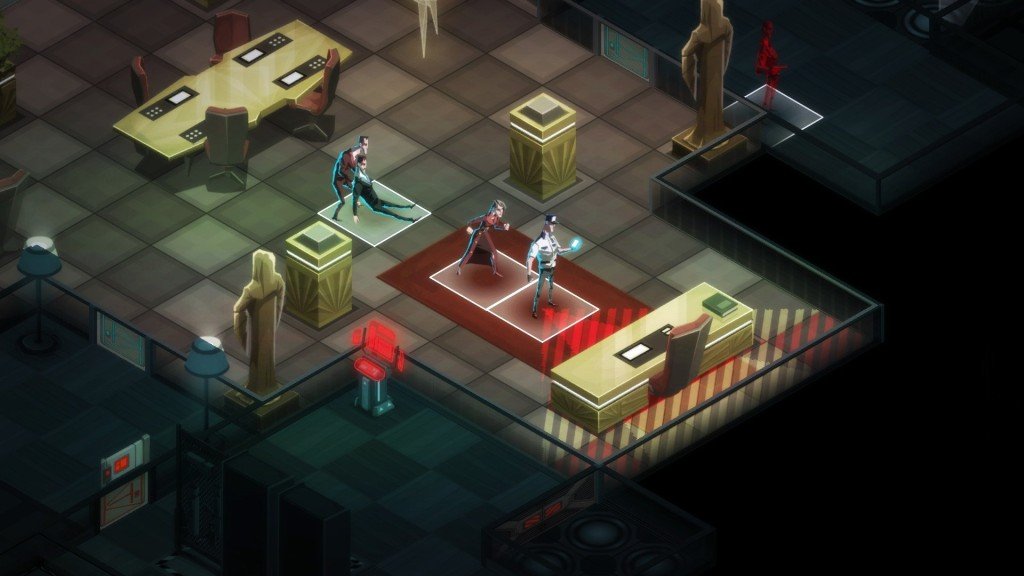 Like Mark of the Ninja, Klei is very up front with information. Areas that are noticed (by guards or cameras) are overlaid in red. Things that are supposed to be noticed but have LOS-blocking objects in the way are overlaid in yellow. Agents can listen for footsteps (as can guards), and can also peek through doors and around corners to get a wider FOV. They can even spend some time observing guards to learn their patrolling route. All this costs is some (albeit valuable) time. Because of all the information easily presented to you, as well as the absolutely binary win/lose or pass/fail, it doesn’t feel like a boardgame with dice, as XCOM sometimes does, and more like a really tense game of speed chess.

This tension is ramped up by the alarm meter. Every turn that goes by increases the alarm rating by 1. Being spotted by cameras or heard by listening devices can also increase the alarm rating. As the alarm ramps up, additional cameras get turned on, more guards enter the stage, and many many more bad things happen. Just like the guards however, you have your tools to deal with the digital threats. Your agents are assisted by Incognita, an AI in cyberspace who can hack into the various items, at the cost of resources. This hacking system is easily overlaid into the real world and can be swapped around with a simple keypress. 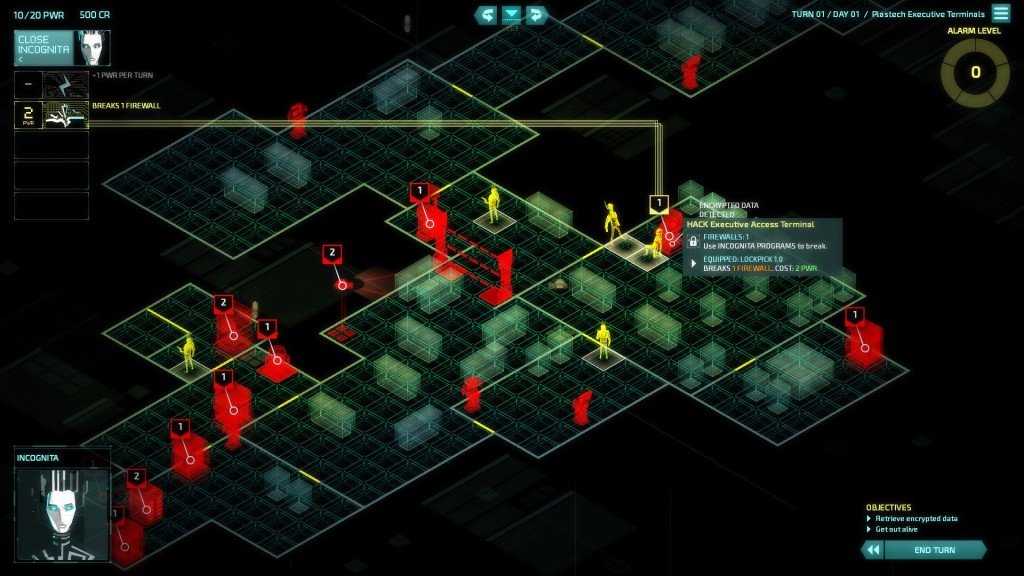 All of this makes Invisible Inc an incredibly tight, solid and GOOD game. While dialogue is few and far between, the voice acting is generally top notch (I like that my agents are British… all spies should be British. Kingsman proved that) and the UI works with the stylized graphics to really bring home the whole espionage-cyberpunk-noir feel. The system is almost top notch. In addition, procedurally generated maps, variable starting agents and mission rewards, and a HUGE variety of options in game difficulty (from how long the guards are knocked out to level of get out of jail free rewinds) means every game can feel like a new game. 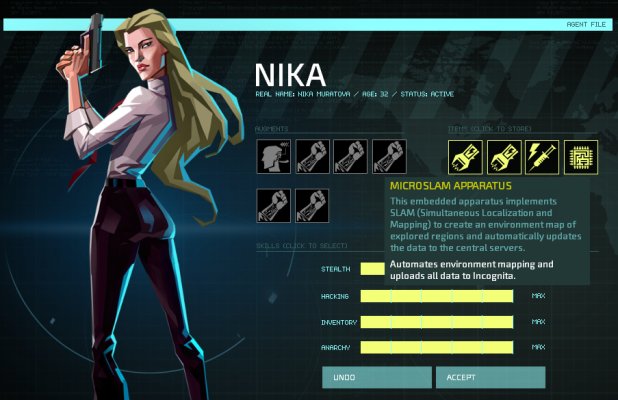 I only have two minor nitpicks. The first is that on one game I had to find a pass key on a guard, and I couldn’t find one. I don’t know if it was a procedurally generated bug, or if I was silly enough to miss it (after all I was pretty new at the game), but it was very annoying and required that I restart the level. The second one is that of story. The starting and ending videos tell an intense story, but that’s all the story you get. It’s true that most of the stories in procedurally generated roguelikes are what you imagine and invest in them, but still I would’ve preferred a bit more meat. I blew through the game in 8-9 hours (I’m sure some of you can finish it in less), and while I can start up another game with another set of agents, I wish I had spent more time with my first team. I was barely getting to know them.

In the end though, what is the game like? Invisible Inc is like a really good haiku.

Game almost flawless.
Atmospheric and moving.
But over too soon.