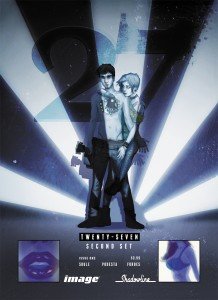 Sophomore albums are always a tricky proposition – while not always make and break for bands if they manage to pick themselves up for a great third album, the ‘sophomore slump’ always hangs heavy over the second album like some star sign out of whack. Nirvana’s Nevermind and The Doors’ Strange Days stand out as some of the greatest second albums ever written, and on the other side The Strokes’ Room on Fire hasn’t had much critical success and Turn It Upside Down cursed Spin Doctors to be one hit wonders forever. Twenty-Seven Second Set #1 comes in just a few months after the original singles for Twenty-Seven First Set was compiled into trade format, and with it hangs a heavy task – will it too consign Charles Soule, Renzo Podesta and W. Scott Forbe’s musical/magical epic into the bargain bin, or will it at the very least be just as good as the first?


Issue one continues where the previous set left off: The quiet, self-reflective coda after the hard-rocking action, where we see Will Garland decide to forge a new musical path by starting to play lefty. Set 1 ended with Garland wearing his guitar once again, looking over the city, poised to take over the world again, and Set 2 opens in a similar way – Garland with his guitar on lefty, looking forward, this time looking at the people who have gathered to watch him play. This mirroring of the previous set ends quickly by the turn of the page, and sets the tone for the rest of the issue.

But while this song is reminiscent of the previous set, things just do not go as smoothly as hoped. I won’t go into any detail here, but while Set #1 was about the sudden rediscovery of genius, Set #2 moves right into the weight of said genius – and like many who have come before Will Garland, this burden becomes the curse, not the blessing. Thinking thematically, perhaps the first issue dealt with moving past being part of the 27 club, Garland’s struggles will next be about being more than a one hit wonder, or in this case, remembered only for The Fizz – and we know Garland’s going to pay a big price to do so. The issue ends with a declaration of intent for the rest of the set – and Soule’s writing carries us there with a sureness, dragging us into Will’s world as it careens out of control, and leaves us needing to know what’s next. 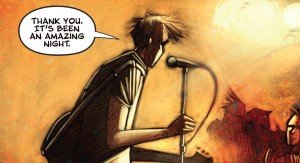 Renzo Podesta is also in fine form, and his pencils give the story the dark corners and shadows it needs. In fact there seems to be a noticeable improvement from the previous book, which is saying quite a bit towards the evolution of the art. There’s not much here in the early part of the issue for him to stretch his legs, but the second half comes with something special. Scott Forbes’ cover continues to be a great each time around, I think getting to see each cover that he’s prepared is a treat.

One weakness weighs the book down, and that would be the lettering. While it is a non-issue for most of the issue, there are times where a period follows a capital “D” ends up looking like an “R”. It’s easy to replace the word with a quick mental correction, but maybe the period could have been placed further away? This is nit picky, of course, but it take me out of the story at times. On the other hand I did read this in a digital format – with the larger print format maybe it will be easier to read. Speaking of larger print formats – I still have no idea how to keep the singles with the rest of my boarded comic books.

So the epic of Will Garland continues, and with issue #1, it’s definitely taken a right step forward. It still remains to see how the full set performs, and if the sophomore slump strikes – but I think we’re in good hands.

(Extra bonus points for the fun bit at the end! The comments made me laugh. Writer Charles Soule has also been posting a cover of a one hit wonder a day on his blog. Fun!)