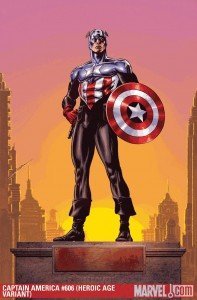 Gears are already in motion and The Heroic Age has arrived in a grand way. Yet the biggest change of all is clear – there are now two men who share the mantle of Captain America. With Steve Rogers back from the dead and now in the role of “America’s Top Cop” aka “the new Nick Fury”, it seriously wouldn’t be a stretch to have the international law-enforcement agency returning to its original name of S.H.I.E.L.D. Rogers’ “ressurection” has given him an almost messianic quality in the Marvel Universe as it rebuilds itself from within.

The big question is: where does that leave Bucky? The former sidekick had more than proven himself worthy of the shield in the years since Rogers was “killed”, but now with his predecessor’s return, the new Captain America seems all but lost in the shuffle that is The Heroic Age. Will he ever be able to get out of the Rogers shadow?

These are the questions that Captain America #606 will hopefully shed some light on.

Writer-extraordinaire Ed Brubaker begins this first arc of the Heroic Age with much of the same formula that he began his award-winning run on Captain America – with a less-than-subtle prologue about who the main villain is. Five years ago, it began with the Red Skull and ended with the mysterious assasination of the diabolical archenemy. This time around, it begins with Baron Helmut Zemo – arguably the worst of Captain America’s nemeses, second only to the Red Skull.

Zemo, who had returned recently in the pages of Thunderbolts, is back to his original villainous ways. While I am convinced that Brubaker is no slouch, it does seem rather convenient to disregard all the characterisation Zemo has gone through in the past, so it remains to be seen if this Zemo is really who he claims to be.

Bucky, on the other hand, is definitely not whom he used to be. His recent run-in with the 50’s Captain America (really, there’s no other way to describe him) has left him troubled and on the verge of depression. In battle alongside The Falcon against the Wrecking Crew, he not only recklessly endangers himself, he also puts the lives of bystanders at risk. This leads to an intervention by both Falcon and Steve Rogers, which seems to help somewhat. After leaving the bar, Rogers flies off in his fancy new hovercar, while Falcon helps a seemingly “drunken” Bucky to his vehicle. Bucky realises too late that he’s been drugged and that they’re walking into a trap, but due to his sluggish reactions, is not able to warn Falcon in time.

With any other writer, this would be the perfect cliffhanger for the first issue of a new story arc. Not so with Brubaker. Instead, we immediately cut to a conversation between Zemo and The Fixer, revealing that they only intended to injure the Falcon, not kill him. Firstly, this immediately reveals that Zemo is several steps ahead of our heroes, that everything has occurred exactly as he planned it, including injuring the Falcon but not Bucky. Secondly, this sets us up for the real cliff-hanger.

Now, the issue has been peppered with flashbacks depicting Zemo’s return and his diabolical plan. At the beginning, he meets up with the Thunderbolt known as Ghost and discovers the new Captain America’s true identity. Then, in a bit of Brubaker brilliance, Zemo and Fixer then meet one of trhe Red Skull’s war allies, a Stan Lee/Jack Kirby creation named Iron Hand Hauptmann and Zemo cashes in an old debt. Finally, at the conclusion of the issue, Brubaker unveils Zemo’s next ally – the Red Skull’s daughter, Sin, who, after the events of Captain America: Reborn, is now warded securely in a mental institute, her face now a red skull just like her father. Unlike Zemo, Sin is clearly in the mood for revenge, and is more than happy to help Zemo in his schemes against Captain America.

While I can understand the need to have a proper passing of the torch from Steve Rogers to Bucky Barnes, I couldn’t help but feel that with Rogers’ return, Bucky needs to establish himself as the new Captain America all over again. Having his first villain in the Heroic Age to be Helmut Zemo honestly doesn’t help his cause, since there’s no real bad blood between Bucky and Zemo and no good reason for the latter to plan his destruction. What Bucky needs are more Bucky-villains: either drawn from his time as the Winter Soldier or completely new ones.

What Brubaker is doing right, of course, is keeping the focus on Bucky as the main character. While I am disappointed that Black Widow did not make an appearance this issue, I guess this simply means that she’ll be spending more time on Secret Avengers instead. This gives Bucky more room to grow as a character, without having to worry about his relationship with Natasha Romanova. No stranger to the title, artist Butch Guice also handles the reins well with a style clearly reminiscent of predecessor Steve Epting’s energy, yet with a distinctive touch of his own. I particularly like how his Zemo never comes across like a cartoon – despite the potential ridiculousness in wearing what is essentially a reddish-pink sack for a mask.

I trust the team of Brubaker/Guice to lead Captain America into a new era. May they establish Bucky so well that no one would ever consider returning Steve Rogers to the title. Fat chance, I know, seeing how the upcoming 2012 movie’s potentially going to need Steve Rogers to be Captain America again, but we’ll keep our fingers crossed till then.