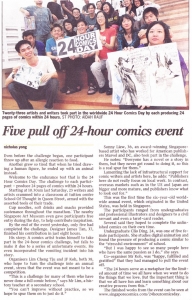 The very first Singapore 24 Hour Comics Day was held on the 2nd of October, with 23 artists and writers gathering at School of Thought to take a shot at something probably none of them have ever tried before. 5 managed to complete their comics by the 24 hour cutoff, with the first taking a mere 8 hours to complete. Even STGCC guest Sonny Liew was there to take part – it’s unclear if he managed to complete a comic (didn’t see his name on the honour list), but still, it’s nice to know that someone established in the industry is there to be part of the festivity. It looks like everybody had tons of fun doing it, and I wish us at HBG had the time to do so. Maybe next year! At any rate, there’s home participation, though it’s unclear how many took part from home… it’s probably not as fun?

You can find more info at their official website listed above, and the completed comics should be up soon.