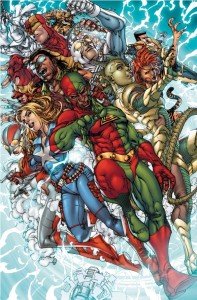 Big news this week as Reed Exhibitions announced that Marvel Comics will be making their presence felt in a big way at this year’s Singapore Toy, Games and Comic Convention (STGCC). We already knew something exciting was in the works when artist extraordinaire Salvador Larroca was one of their first guests to be announced, but this is much, much more than anyone could have hoped or dreamed of.

At STGCC 2010, Marvel will be exhibiting for the first time in Asia. Since I don’t think the mainstream media have an idea of how amazing this news is, here’s my take on it.

Having attended the San Diego Comic-Con International this year, we know first hand how extensive a Marvel exhibit at a convention can be. Sure, everyone pulls out all the stops at SDCC, but Marvel went one step ahead and revealed not only Odin’s throne but also first looks at the helmets of Thor, Odin and Loki, Captain America’s shield and the Infinity Gauntlet. These movie props from Thor and Captain America: The First Avenger were a huge hit at the Con, and that was only the main draw. Throughout the four days we were there, they were giving out tonnes of freebies, including posters of concept art from the two movies, as well as promoting their upcoming video games: the Thor movie tie-in and Marvel Super Hero Squad: The Infinity Gauntlet.

Of course, we’ll be hoping that Marvel will be planning to reveal more never-before-seen props and give away loads of new freebies, but even if Marvel pulls the exact same stunt that they pulled at San Diego, it would still be a huge acknowledgement that the burgeoning Asian market is worth tapping into.

STGCC also announced through an email blast that there will be panels scheduled and so far, it seems like a Marvel monopoly. On Friday at 1.30pm, C. B. Cebulski, who’s official title is Senior Vice President, Creator & Content Development at Marvel, will be giving a solo talk on talent scouting. To those in the know, Cebulski is currently in the midst of hiring talent from all over the world to work exclusively at Marvel Comics, and he knows exactly who he’s looking for. This panel is definitely not to be missed by anyone who wants to work in the ever-growing comics industry as writer, penciller, inker or colourist.

In fact, some of the other invited guests at STGCC are testament to the comic book giant’s desire to harness international talent. Larocca is Spanish, Giuseppe Camuncoli is Italian, Alex Maleev is Bulgarian, Esad Ribic is Croatian and representing Asia are Filipinos Leinil Yu and Harvey Tolibao. These will be joined by Cebulski in a Saturday afternoon panel at 3pm about Marvel in general. Though I’m a firm believer that artists are more comfortable in their element in an Artist’s Alley, while it should be the writers engaging the fans in panels, it is an excellent sign of Marvel’s willingness to be a mainstay in Asia by bringing all their collective international artistic talent in one location.