Earlier today, Marvel announced their latest company-wide crossover, Fear Itself, due April 2011. After last year’s Dark Reign this year has been the return of the “brighter” Heroic Age, and now we’re going to be waiting for the next huge things, the seeds of which I bet has been laid for two years, possibly since the events of Civil War, when the Avengers Initiative was born. 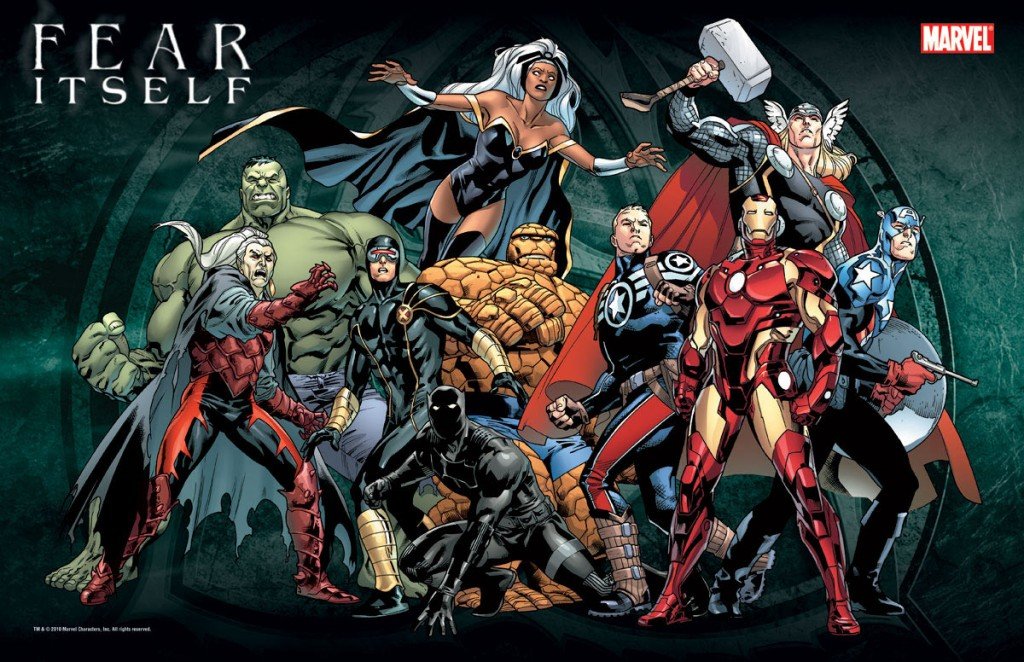 In a half-hour press conference, it was revealed that Fear Itself would be a summer event in the same vein as Civil War and Secret Invasion, which turned the Marvel Universe on its end and whose rammifications continue to affect our heroes till today. The seven issue series pits the yet-to-be-revealed God of Fear against our superheroes, represented by a Chosen Eight, and the story will be in the good hands of Matt Fraction and Stuart Immonen, both of whom we’re big fans of at HereBeGeeks.com, and will be preceded by a Prologue in March 2011, from the team of Ed Brubaker and Scot Eaton.

Needless to say we’re most excited, especially since Fear Itself was teased by Matt at the Singapore Toy Games and Comic Convention 2010. So join us as we bring you our thoughts on this breaking news! 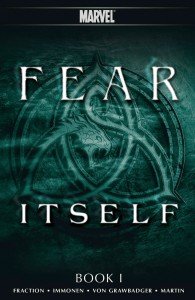 The design is simple yet sinister, the green marble background reminiscent of the old Vampire: the Masquerade sourcebook. Of note would be the triquetra symbol, stylised to feature a serpent, which is clearly a symbol if not the logo of our main antagonist, the God of Fear. But who is the God of Fear? 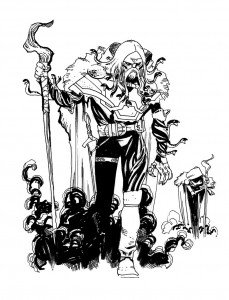 This image appeared during writer Matt Fraction’s introductory comments: “the Marvel heroes versus the God of Fear… the more you fear him, the stronger he gets, and we are all his weapons”. At first glance, the God of Fear is a wizened man dressed in the garb of either an Asgardian or Olympian. What bears further investigation would be mass of snakes seeming to protrude from his skin and hair, as well as the cloud of black smoke he appears to have emerged from.

The Marvel Universe is no stranger to “snake” related deities and a quick search turns up the likes of Typhon (last seen in the pages of Incredible Hercules) and Seth (the Egyptian god of death and evil who has rarely been seen over the past decade), but it was the mention of the Elder God Set which led me to investigate the Serpent Crown, which was recently seen in Secret Avengers in an attempt to unearth a primordial evil on Mars. Could this “evil” be the God of Fear? A (possibly ridiculous) way of looking at this – he might be Man Thing! You know, “he who knows fear yadda yadda MAN THING!!”

Alvin has the following theories regarding the potential identity of the God of Fear, based on those currently running around with fear-based powers.

1. Phobos. Son of Ares, who has not had a good opportunity to grieve since his father was killed during the events of Siege. His power levels and history are VERY muddled right now, so maybe this has something to do with the original Phobos returning from the dead with Deimos (new Phobos’ half brothers), to address firstly the discrepencies with the original Phobos and the new Phobos (and if they’re one and the same), but this seems unlikely on hindsight. Needless to say, the new Phobos was VERY pissed when Fury forced him to stay in base as his father was being surrounded, as he was about 10 years old.

2. Nightmare. Killed by Amatsu-Mikaboshi in Chaos War. Nightmare is Trauma’s father (Trauma is below), and tried to use him to unleash fear in the world, but failed when Trauma managed to overwhelm him internally with help from Penance (aka Speedball, aka Robbie Baldwin). Nightmare’s death affected the psionic realm somehow, so we can assume his son was affected – but Chaos War is still ongoing so obviously details are scarce.

Trauma, son of Nightmare, left the Initiative recently and is not in Avengers Academy, so if we follow Gage’s hints – Speedball (aka Penance but the name has since reverted) might be the more likely traitor since he played a part in Nightmare abandoning Trauma. But poor Robbie Baldwin – can’t he catch a break?

Way I see it, Trauma will play a huge part, maybe to take revenge for his dad for some misplaced reason, and I think Daredevil and Black Panther somehow will, possibly working together (with Wolverine and Spidey, obviously) to take down either Amatsu-Mikaboshi or Trauma. And if Trauma was still in the Academy I’d say this he’d turn traitor and then make a final sacrifice for redemption – but that seems moot right now. A lot of this, I think, depends on the end of Chaos War. But since Greg Pak wasn’t in the planning team (according to Gage)… I wonder how much this will hold.

Also curious is the presence of a hooded figure in the background of the God of Fear. Long-time Marvel fans may be led to believe this is Death, lover of Thanos. If this is indeed her, what does her presence in this picture mean? Is she the puppeteer of the God of Fear? We at HereBeGeeks also have another theory: that the figure in the background is possibly Parker Robbins, aka the Hood, who is currently in the middle of the Avengers storyline, where he is reforming the Infinity Gauntlet. Also a distant but distinct potential candidate: Mephisto, who after the events of One More Day, might be looking for his next chance to manipulate our Marvel heroes.

There’s a lot more detail we could get into, especially with the juicy hints from the timeline from Avengers #5. Already, the references have begun, with “Who is Worthy”, which is an obvious reaction to the 8 heroes to be chosen. “Who is Worthy” is somehow linked to “9.9.9”. And then, down some ways, after “Academy Traitor” and “Night Falls”, we have potentially related hints like “All Hope Lies In Doom!” and “Fear Without Man”. Needless to say, we will be poring over the timeline as more information about Fear Itself is released.

According to Marvel, Fear Itself will be an event not easily forgotten, and all this Geek can think of is: What will happen to the heroes who are not found worthy?