While the rest of geekdom is off partying at San Diego Comic Con and PAX Australia, it’s time I finally got back to musing bout my latest weekly haul of comic books. Was really disappointed there wasn’t a single copy of Gail Simone’s much-anticipated and heavily hyped Red Sonja #1 to be found at my usual place but hey, I still got a dozen new titles to enjoy. It’s an all godly musings week and as usual, there be spoilers ahead! 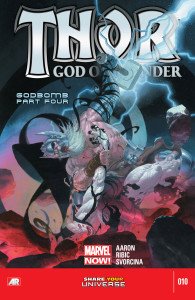 Thor God of Thunder #10. This amazing cosmic epic by writer Jason Aaron and artist Esad Ribic has continued to be my first pick of the week whenever it’s out.

It’s the penultimate issue as Gorr the God Butcher stands ready to launch his dreaded God Bomb and kill every single deity in time and space. The three Thors from different time periods are all captured in death traps and it looks hopeless. You can’t get a direr situation than that but even though we know the good guys will save the day, there’s this nagging fear that one of our favorite Thors might not make it out alive. That’s how deep and rich a character Aaron has given to each of the Thors. You just can’t help but have a soft spot for at least one of them. Old King Thor has daddy issues when he finds out he’s behaving more like his dad Odin, Avenger Thor is perhaps the one we are most familiar with while Teen Thor is all brash, corky and who has yet to earn the right to have his own Mjolnir.

Ribic’s art is also a huge reason why this book is such a success. The art on every page just pulls you into the action. It’s not too heavy and there’s enough space to let each the art in each panel breathe or stand out on its own. I totally loved that kickass panel where Avenger Thor was hammering away at the God Bomb with not one but two Mjolnirs, one in each hand. And the gorgeous colors by Ive Svorcina really make the entire story come alive.

Now despite all that praise, there were a couple of details in this issue that I wish were handled a little differently. Having planned all this for thousands of years, you would expect Gorr to be a little more meticulous or patient and not kill his wife just because she called him a “god”. Then Gorr’s son decides to free Avenger Thor when he finally learns his dad isn’t just a nice guy after all? Bit of a deus ex machine to me. Still, I enjoyed the heck outta this issue and highly recommend it. 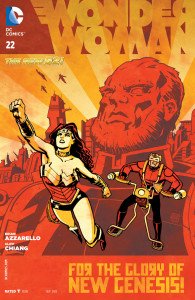 Wonder Woman #22. Speaking of gods, this latest issue of Wonder Woman finally (re)introduces us to the New 52’s New Gods home planet New Genesis and its ruler Highfather. After being gravely injured in back-to-back fights with Artemis and the First Born, Wonder Woman is brought to New Genesis by Orion for some serious medical care. On New Genesis, she learns that things aren’t really as idyllic as it appears to be.

When the last storyline ended on a very sitcom-ish note with the entire cast crowded around the baby in the apartment and making googly eyes at the kid in issue #18, I actually thought of dropping the title after that but only for a spilt second. Well, I’m glad I’m still reading it.

Now the story about a baby being a future prophet of doom and the heroes having to still protect the infant from other bad guys may remind everyone of a dozen similar plots, as well as the current storyline in the all-female X-Men title. But it doesn’t matter cos I’m liking it now as writer Brian Azzarello and artist Cliff Chiang have really crafted an excellent story here that ties in the old Greek gods with the New Gods. Pity we only saw two New Gods, Orion and his dad Highfather, I’m still hoping to see more in upcoming issues. Chiang has brought his own art style to Kirby’s New Gods and their home New Genesis. There’s a more familiar modern sci-fi look to it all as the backgrounds and scenes sort of reminded me of several movies including the first Star Wars trilogy.

I have to admit that I read Wonder Woman #21 and #22 in one sitting cos I missed the previous issue last month. Lots of things happened but it didn’t feel rush. Pacing was good and it’s interesting to see Orion elevated to leading man status in a title like Wonder Woman. He’s not the full on single-minded, battle-crazed, Darkseid-hating warrior like before. He’s now got a wicked sense of humor but still dealing with his dual personalities. Quite possibly the best version of Orion I have read in a very long while. 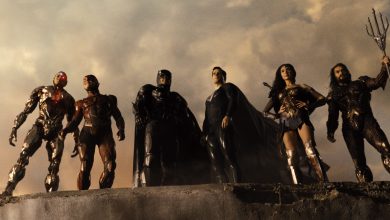 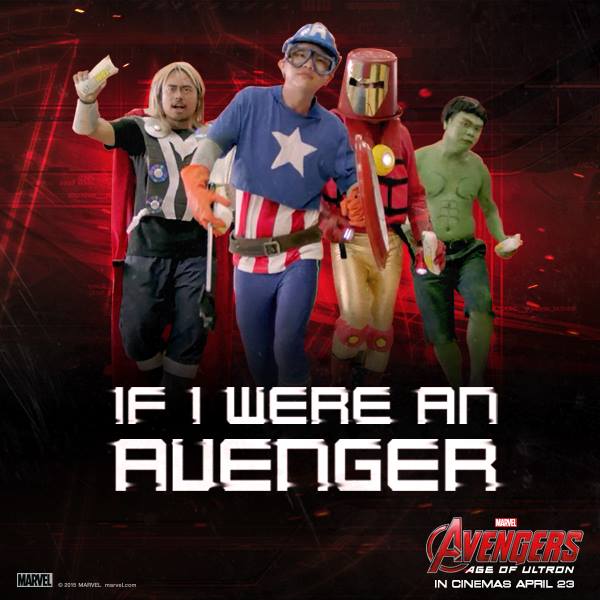