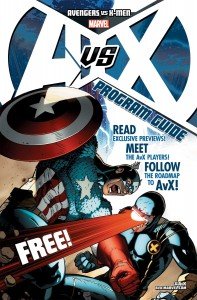 Now this isn’t exactly a review obviously since the first issue ain’t out yet but flipping through the free Program Guide and looking back at Marvel’s summer event history, has got me thinking. Am I excited about this story? Not really, reason is I’m looking at something that has already been done and redone more than a couple times since Civil War. Namely it’s another big summer event of pitting heroes against heroes.

House of M, Civil War, Secret Invasion, World War Hulk and Fear Itself, its all been more or less, a variant of Marvel heroes fighting other Marvel heroes, be they brainwashed by someone or aliens in disguise. Even the Siege storyline had Osborn’s bad guys working as hero counterparts who later fought the real heroes. I remember reading how phenomenal the sales figures to Civil War were, but I don’t know if that led to some kinda editorial mandate.

Anyway, back to the upcoming AvX plotline, we got the Avengers who realize that the Phoenix Force is heading back to Earth. Naturally as Earth’s main protectors, they can’t allow such a lethal force to make its (or her) way back here. In the X-Men camp, they are cautiously awaiting the possible return of their old teammate Jean Grey aka Phoenix. I trust you can see where the conflict of interest lies. Plus Frank Cho draws a frightfully thin and withered Cyclops. 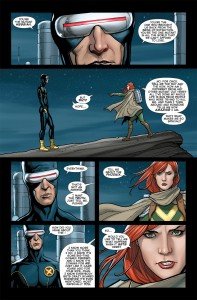 And there you go, another summer spent reading about heroes beating up each other? Clearly since the series will only be out in early April, I can’t say if it’s a good or bad read but it’s the whole idea of another ‘heroes versus heroes’ storyline that just gives me that déjà vu feeling in a bad way. I want to see something more and something different in Marvel’s big crossover event, take me to somewhere I have never been or show me something I have never seen. Seriously, how long can you milk this concept before it gets stale? Although having said that, I have no doubt that AvX sales will be off the charts but still … come on, for one summer at least give us something new!

Fortunately there are other Marvel titles that are currently picking up the slack with oodles of classic villains going up against their arch-enemies. Writer Dan Slott has brought back the Sinister Six (Doctor Octopus, Electro, Sandman, Mysterio, Rhino and Chameleon) to the pages of Amazing Spider-Man in his upcoming ‘Ends of the Earth’ saga. Meanwhile writer Matt Fraction has assembled all (and I do mean pretty much ‘ALL’) of Iron Man’s old foes like Blizzard, Titanium Man, Crimson Dynamo, Whirlwind, Living Laser and The Mandarin in his ongoing Iron Man title. In Secret Avengers, we caught a glimpse of new writer Rick Redeemer’s gathering of Marvel’s robot and cyborg villains.

So if you are like me, and have had enough of heroes fighting other heroes, there are still more than a few Marvel titles that do feature familiar groups of villains in action. This summer is definitely starting to heat up real fast, so make yourself comfortable and enjoy the ride.