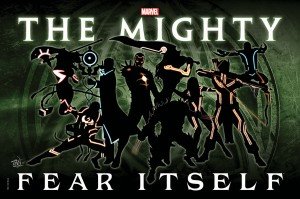 With three more issues to go in the big Marvel event of 2011, Fear Itself, the House of Ideas has revealed this teaser pic of “The Mighty”, which, while following the style of the original Fear Itself teasers, is definitely not much of a secret identity.

With the issue #5 being entitled “Brawl”, one doesn’t need to think very hard to predict what is going on. But are we going to like it?

I will admit that I first wanted to think the worst of this teaser picture. If nothing else, the sheer presence of Iron Man in a clearly commanding stance continues to irk me – but I will have to get used to it sooner rather than later, or risk my enjoyment of next year’s “Avengers” movie. That being said, it is obvious that these shadowed figures are the Avengers, from both the Iron Man’s team as well as Luke Cage’s team, now wielding strange weapons and being augmented in much the same way as their Worthy foes.

No real big surprise there, surely. The two Avengers teams have been working as one unit through the course of Fear Itself thus far and it’s nice to know that they’re totally compatible and the whole point of having two seperate titles is just so that Brian Bendis can churn out twice the Avengers stories for twice the price in the same amount of time. As if to drive home the fact even further, the team is called “The Mighty” which, while it could be said to have borrowed from “The Mighty” Thor, it also brings back memories of Dan Slott’s awesome run on “Mighty Avengers”, which as a team is far more reminiscent of the classic Avengers teams than anything Bendis could throw together. But that’s just me, surely.

Most of the identities are obvious, and Alvin and I both agree that the line-up definitely includes Iron Man, Wolverine, Spider-Man, Hawkeye, Iron Fist, Dr. Strange and Ms. Marvel. There ARE two female characters who are less obvious, other than their size, but considering who’s left on the Avengers teams, we both feel that the larger one belongs to She-Hulk (who technically is not on any of the Avengers right now) and the smaller one belongs to the newly-dubbed Power Woman aka Jessica Jones (see what I did there?). Even though technically, Valkyrie has been making an appearance in Fear Itself, with Titania being one of the Worthy, it is only appropriate that the permanent nemesis She-Hulk be on the opposing team.

So without a doubt, this would translate to some sort of WWE Survivor Series type match-up between the Mighty and the Worthy, with eliminations from each team until, presumably only two are left. The match-ups would normally be classic epics, such as the aforementioned She-Hulk vs. Titania, or even Wolverine vs. Hulk, but seeing how writer Matt Fraction does appear to have problems pacing his blockbusters, I fear that artist Stuart Immonen might just be drawing one clash after another, with each new frame dulling the impact of the last one. I seriously hope they prove me wrong.

The big question of course that this teaser leaves unanswered is, where are Captain America and Thor? Are they fighting the Serpent, or is there more to this otherwise simplistic free-for-all? Is Sin about to kill off two Captain Americas, and is Thor, already wielding a hammer, already considered sufficiently mighty? We know Thor is to face off the Serpent at the end, which would explain him not being amongst The Mighty, and what that also means is that it isn’t Iron Man leading the team, but Thor himself. Thor himself versus Fear itself – what do you think?