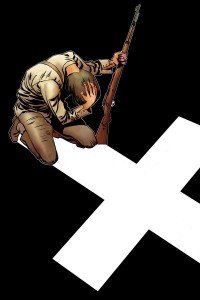 Peter Panzerfaust #5 picks up right where left off at #4 – with one of the Lost Boys, Alain, being stuck in the house right before it explodes. Except it’s not Peter who notices, it’s one of the Lost Boys (Gilbert), who’s too late to do anything. Another Lost Boy, Felix, loses control of his emotions, and while Peter had wanted to run back in to save Felix, Gilbert stops him, and the boys (and girl) make their escape. That event and its repercussions thus play out through #5.

It’s hard to see why the boys love Peter so much, given how he’s (a) left some of them behind (b) not made the wisest of choices, usually choosing heroism over safety. “That was Peter’s way” might seem like the most cop-out of answers, but in #5 we get a hint of Peter’s actual struggles with the responsibility of taking care of these Lost Boys – boys that he could have easily left behind to chase his own causes. And I think that’s the issue’s clincher – that if a Peter Pan from fantasy was to be translated to the real world, would all his bravado be just something covering up a facade?

Wiebe himself has called Peter Panzerfaust a “reimagined Peter Pan story“. While the (spoilers!) cover of issue #7 hints to a return to the tale many of us are familiar with, setting Peter Panzerfaust within World War II means a need to depart from the usual straightforward victories that Peter Pan is used to having. And the gravity of the ending of #4 carried on to #5 shows that this “reimagining” is beginning to take flight, shedding off its own shadow. By deviating from the familiar tale Wiebe has allowed his own rendition to breathe – so it remains to be seen how #7 will turn out. Still, can anybody tell me the importance of the name “John Parsons”?

At the end we see the tale tidying up – if you were to be cynical you’d say that’s writing for the trade. I, for one, am interested to where this narration goes next. A pity, really, that at points Tyler Jenkin’s pencils fail to bring justice to the tale. My main issue is how he’s had to resort to hairstyles and hats to set the characters apart (one panel near the end should make this pretty clear) – skinny and lanky might be a great fit for Peter, but too many of them makes it hard to tell apart (especially since they all can’t resort to having costumes). Nevertheless, the pencils work great, especially in the splash scenes.

All in all, Peter Panzerfaust #5 ties up the tale neatly – for now – and as we move on to the next narrator it’d be interesting to see what happens next.