This week’s a very Marvel week with just one Dark Horse title. Interestingly, it’s the special titles like Strange Tales II #2, Women of Marvel #1 and we have the premiere of Generation Hope #1 and an issue of Buffy the Vampire Slayer #38. 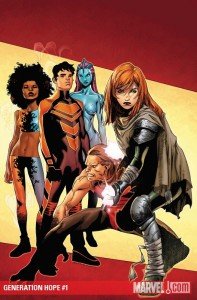 Generation Hope #1 starts off with the team going on to Tokyo. Surprise, surprise the latest mutant gets all tentacly. As we find out and fight this latest mutant, there are introductions to the new team including what their powers are. Rogue is definitely being the teacher and pilot of their crew. Hope though is getting a bit more spunky and while Rogue cares for her and doesn’t want to get the girl into a mess, the redhead leads her team to stall Rogue, Cyclops and Wolverine so that she could try to get her hands on the new mutant.

The story stops there once she finds the mutant and feels a bit short because the rest of the issue has “journals” of the backstory of Hope since it’s definitely needed if one doesn’t read the past issues of Second Coming, Messiah etc. It is a whole bunch of backstory summarized for people to pick up Generation Hope. Comes with a nifty little map of books to get if you wanted to read into it more. 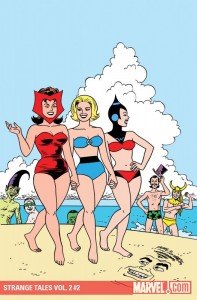 Strange Tales II #2 is just plain weird. I still like the different art styles, compared to the first issue, more stories in this one are more of the humorous sort. Of course Wolverine seems to be in plenty of the stories since he is such a popular character but you get other not so well known ones too.

It is just ridiculous fun since most of the writers and artists for this issue are making Marvel characters do such weird or off beat things like have a beach party or defeat villains through their nosehairs. That move was disgusting but funny.

For Women of Marvel #1, I’m not sure why we’re having this after Girl Comics we had in March. I’m just wondering what’s the angle to this on what sort of audience readers do they want. Is it one of those “Hey we want more women to read comics, look! We have comics with girls in them!” ? 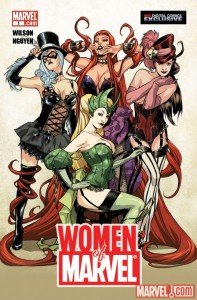 On a happier note, this issue focusing on the women characters of Marvel is much better than the so called Marvel Divas which I would have named Marvel Bitcas. Unlike the Marvel Divas however, Women of Marvel #1 is more like an issue of short stories. For this one we have 3 with Medusa, Black Cat and Satana and Enchantress averaging about 8 pages per story.

Unlike Girl Comics however, Women of Marvel seem more in character and less “Strange Tales”. Interesting story line up since they could have just chosen the more popular characters like Rogue or Emma Frost for more readers. Actually, why isn’t anyone writing a Strange Tale with Emma Frost? I want something to do with laundry or how in the past she goes around in just a corset and undies. People with illustrating skills, go forth and do it! 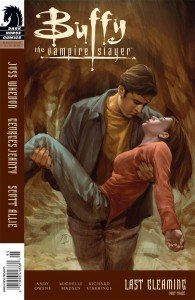 It’s tentacle monsters once more in Buffy the Vampire Slayer #38. Joss Whedon’s finish the arc with his writing. Somehow he has managed to make it less insane. My predictions when I read the past BtVS were true. The new world is angry about Buffy and Angel making and abandoning it. Meanwhile, Buffy knows about Willow’s snakey hot girlfriend and the Master is back!

Spike says it best in this issue that Angel would come on in the last minute and get all the glory etc as always. Well, Angel does come on in again… Punching Buffy in the face. Duh duh duuuh. Guess who got possessed! Not sure how many issues are left in this season 8 but it feels like it’s finishing up pretty quick. Perhaps two more or four? Hmmm.

And that’s it for this week. Marvel’s special limited series are pretty fun to read since they’re not like your normal storylines anyway.