Bruce Wayne is back. However, let’s first get to what I got this week! Firstly,  I got Bruce Wayne: The Road Home – Batgirl, Strange Tales II, Emily the Strange: The 13th Hour #4 and Curse of the New Mutants: X-Men #4. WARNING: REALLY SPOILERY. 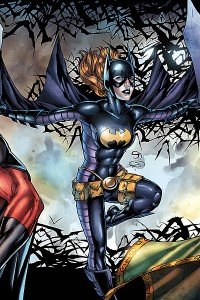 Now to what everyone’s interested in. Bruce Wayne is back! He’s back into our present time so hurrah for that. I didn’t grab the previous issues to see how he got back since it’s easier to get the issue compilations for that. I was pretty interested in Bruce Wayne: The Road Home – Batgirl and what he’d think of Batgirl considering he didn’t exactly approve of her.

I’m definitely getting the compiled version of this too when it comes out but as for Batgirl’s one shot story, it starts off with a mysterious stranger stealing a high tech gun with bullets that phase through anything until it hits the target.

This pisses Steph off because she lost the thief and really, he had the ability to shoot her with heat vision and lantern power. She thought it was Amazo but it wasn’t. However, she did figure out that he could have put her down easily and it felt more like a teachable moment.

Babs Gordon tells her to lay off the investigation but Steph being Steph is stubborn and gets Wendy Harris aka Proxy to help her out. Although out in civvies, I really like Steph’s hat. It’s a balaclava! A purple one. That’s cute.

No duh that she manages to figure out who or where to find the thief after busting a gang and getting more information for herself. When she confronts the thief… Well, you know the title of this issue… It’s Bruce. AND SHE SLAPS HIM FOR BEING DOUCHEY.

Really, the whole thing was a test for her and she flees after she realizes that she slapped him. Yay for him being back though. So Bruce is back and Steph, yes she’s going to keep being Batgirl. Apparently it was all to his plan. I wish Steph could have slapped him more then and oh… Apparently he knows what is going on with Cassandra Cain. Perhaps we’ll see her again? We need to know what is up with Cass. 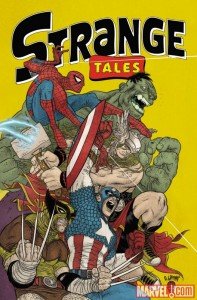 Next up is Marvel’s Strange Tales II. It’s issue 1 of 3 but I got this because Kate Beaton is in it. She does draw silly historical cartoons and at times about superheroes too.

When they say it’s strange tales, it certainly is very strange. Most of the stories are actually comedic in nature instead of the regular angst or soap opera drama you read about the X-Men.Well, most are comedic if not all. Those that aren’t comedic are darker and full of impact even as a short piece.

The variety of illustration styles is a visual buffet and that we get to read some pieces on the “less” popular Marvel characters. There’s a pretty good selection of web artists in this issue too so some of the styles you might see are familiar if you like to read webcomics. Just take Strange Tales II like a short story compilation in a slightly fanfiction way? It’s not fanfic but it’s close to it. 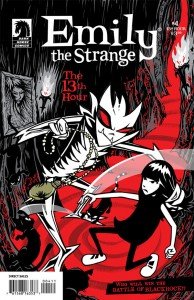 Now we get to Emily the Strange: The 13th Hour #4 which is the last of the story arc. Anyone who likes this little gothic punk girl and black cats should have gotten the series. In this last issue of The 13th Hour, she finally escapes her mind and learns more about her aunt.

For a gothic punk girl, Emily is a really sweet girl even if she’s in opposite land at times. One point to her is that she has a literal soft spot in her heart for creatures and kitties. KITTIES!

We find out who exactly the monster is and hey, this whole arc is actually how she got her other cats! To sum it up in her words, this story is about how she found herself and then got lost! I’m not sure if they’ll have a compilation for all four issues because one issue is actually thicker and has more pages than a regular comic book. Hmm, it would be neat if they do though. 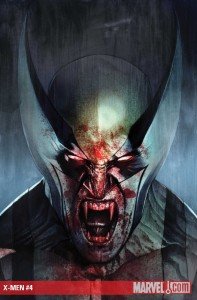 Alright, Curse of the New Mutants: X-Men #4 we know that Wolverine’s now a vampire. Boo freaking hoo. Is anyone else reading this series?

I find issue 4 to be exceptionally cheesy for some reason. They’ve confirmed that Wolvie’s a vampire and Blade is slaying vampires with Angel as his partner.

The cheesy bit comes when everyone at the X-Men conference room goes, “Le GASP!” when they see Wolvie being a vampire during a private call to the leader of the vampires. Even Emma’s clinging onto Cyclops and going all “Whatevaah can we do? Wolverine’s a vampire!”. Not her exact words but she might have as well said that in a Southern accent too as she clung to him. Where’s my bitchy confident Emma Frost, huh?

With all the past events and apocalyptic happenings, they’re panicking over this? Whatever man, I’m just sticking for the cheesiness now.

And that’s it for this week! I’m waiting for Batman’s The Road Home with Catwoman one shot. Selina Kyle, she can be such a romantic and the two of them together is just AWWWwww.