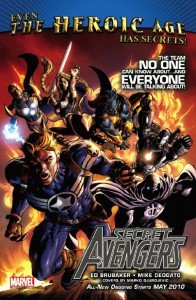 The second day of C2E2 is over and one of the bigger announcements of the day was the unveiling of the much-hyped Secret Avengers. Despite a leaked cover image depicting the six Secret Avengers originally announced, it turned out there were more surprises in store from the team of Ed Brubaker and Mike Deodato.

Yes, opening C2E2’s Cup O Joe Marvel panel was the revelation that there are not six, but NINE members of the Secret Avengers. The most surprising addition to the team? None other than the Irredeemable Ant-Man, fresh off the latest version of the Thunderbolts.

An Ant-Man, back in an Avengers title? Oh say it isn’t so!

ComicBookResources News Editor Kiel Phegley had an exclusive, in-depth conversation with Ed Brubaker and having read the article, here are my thoughts about the super espionage team that is led by Steve Rogers, “the new Nick Fury of the Marvel Universe”, and his paramour Sharon Carter, “the [ex-S.H.I.E.L.D.] liaison who runs operations”.

Naturally, my first reaction was: Steve Rogers? Sharon Carter? Ed Brubaker? Awesome! It’s very reassuring to know that Brubaker will continue to write the “Steve Rogers and Sharon Carter book”. After all, they were one of the original Marvel Universe’s power couples, and for the past five years, have been lovingly and thought-provokingly written by many Cap writers in the past. Though their roles are vastly different now, I have no doubt that the human dynamic between Steve and Sharon will continue to reflect and remind fans of what made them work.

What came as a little bit of a surprise was the inclusion of Black Widow. Now the Widow’s been a regular fixture on the Captain America title as Bucky’s love interest, and of course, Brubaker undoubtedly has a soft spot for her, or he wouldn’t have brought her in. That being said, Bucky has been “upgraded” to the main Avengers roster, and Black Widow, soon to be on the silver screen played by Scarlett Johansson, has just revealed issue 1 of her own ongoing series this week – to rave reviews. I honestly think her appearance on Secret Avengers will be limited as a result, which is ironic, because she’s arguably got the most experience as a super-spy.

I’m of two minds when it comes to the Irredeemable Ant-Man aka Eric O’Grady. The Ant-Man mantle is one I take very seriously, having been a fan of both Hank Pym and Scott Lang’s characters, which were both a well-balanced mixture of the heroic and the tragic. Naturally, I thought the Eric O’Grady character was simply tragic – a forgettable jerk. How he managed to hang around in the Marvel Universe when the anti-hero Phil Urich gets essentially discarded time and time again is a perennial question to me. All that being said, I’ve seen Brubaker do wonders with Sin and Crossbones, so this anti-hero may still have the potential to join the others who’ve held the title of Ant-Man.

I’m concerned that some of the characters, like the powerhouses Valkyrie and Nova may not be entirely suitable for a super espionage type team, and that Secret Avengers might end up becoming just another branch of the mainstream, like the classic days of the Avengers West Coast. Not that I’m complaining, of course, with War Machine getting his Avengers start there, it does feel like things have come full circle. Now to worry about picking up multiple $3.99 titles!