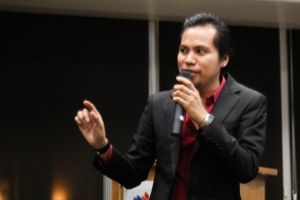 Harvey Tolibao just seems to be the gift that keeps on giving. Having arrived here for Singapore Toy, Games and Comic Convention (STGCC) 2010 (where we interviewed him here here), Harvey has stayed way longer than many of the invited guests, and if I didn’t know better I’d say he was staying for good! That probably won’t be the case, but we did have a nice presentation and signing by him just last week at the National Library as part of their Comic Marvels series. He brought tons of sketches and gave us a nice history of how he got to where he was today – on top of some character studies of a top secret project that isn’t supposed to be announced yet! With him giving another signing at Absolute Comics on Thursday, that would be a good time to ask him about it then, no? 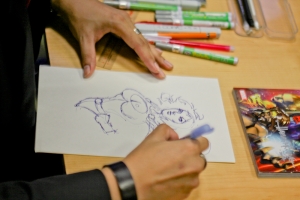 Harvey was a little reticent to discuss too much about his new project, but judging by the line art (very Simone Bianchi, but he did say Olivier Coipiel’s recent work was a major influence in his style) and the amount of time taken per page (3 to 4 days per page), it’s definitely going to be a huge project. Given that this talk was given before the Fear Itself announcement, one suspects it might just be one of the tie in issues to the main line. I’ll respect Harvey and not post a picture of what he’s working on, but I suggest you not be, well, tricked by any misinformation. And no, it’s not Power Girl. He drew that when a fan requested for boobies. I must say it’s pretty apt.

Harvey was definitely not abashed by how geeky he was, which he reaffirmed throughout the night. Most of the geekery is reserved for movies, with more than 1000 DVDs making up his collection – his favourite movie right now being War of the Worlds, which he didn’t love at first, but after seeing it as an artist has grown to love it. He’s very influenced by movies, rushing home to sketch Doc Ock and Spidey for 4 hours right after watching Spider-Man 2. 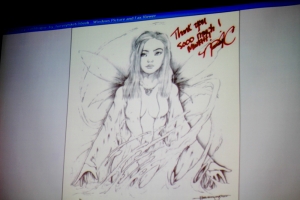 Harvey cited many influences throughout his creative career, from Travis Charest to Norman Rockwell to Micheal Turner to Leinil Yu. Drawing also from a large pool of manga and anime influences (and having a huge crush on a certain nightmare Samurai and Kenshin), Harvey doesn’t shy away from copying the art styles of other people – in his unending drive to constantly improve through by assimilating the styles of others. But he goes philosophical in his final acknowledgment, giving credit to his creator, and explaining that in the end the one he is truly copying from is God. Not everything is as serious, as he cites sexy ladies and big boobies as a reason why he got into art (to the consternation of his mom), revealing that one encounter with Filipino superstar Nancy Castiglione particular encouraged him as he the artwork he gave to her for free in her room wall when a TV crew filmed her apartment, and I think I can identify with the joy when one of your own favourite stars actually keeps a gift which you gave to them. He also listed his favourite comic writers – Chris Yost, Robert Kirkman (Very imaginative), Mark Millar, and BM Bendis (apparently because he is bald, but I might have misheard this). 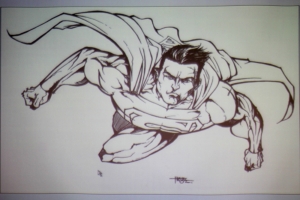 These days Harvey works on X-Men Legacy where he changed his style (once again) to match the story. He’s reminded of how his detailed art style irritates all kinds of inkers, including the best inker Quesada gave him for Hellbound: Second Coming, industry veteran Paul Neary. Still, he’s come a long way, and Harvey gave us an insight to how he started out, from the ugliest Superman, which he never regretted because it led to his first ever criticism in English. Since then he’s been through a heartbreaking loss of an entire portfolio (which was never recovered) during which he nearly quit drawing altogether. Thankfully that didn’t happen, and now he’s always constantly drawing – even when travelling in Singapore from City Hall MRT to Eunos he managed to get someone watching him draw to miss his stop. Even back in the Philippines he’s always drawing on the bus, even drawing old ladies who get frightened by him, but at the he gives them the art, and the joy on their faces when they receive it fills him with great encouragement.

He had quite a few tips for those hoping to break into the comics industry, from back when he first broke in with Stephen Segovia – to first know your market, which I must admit might not be the easiest thing for creatives to do. Constantly reminding us to open ourselves to projects – he next mentioned that surviving the industry requires creativity, skill in composition and the ability to meet deadlines. Comparing the first draft and the printed version of a page really gave us an insight as to how he as an artist grew to strengthen his composition.

To give further examples, registering with Deviant Art and posting his work up there led to him working on Star Wars: Knights of the Old Republic vol 2 – all from a sketch of Anakin. (I bet he was double chuffed when he found out Travis Charest did vol 1, which pretty much meant he was following his idol.) But that definitely wasn’t his first big break, having worked on Tor Books’ comic adaptation of Robert Jordan’s New Spring – which he’s very proud of especially since he received a commendation from Robert Jordan himself. Since then he’s been a Marvel mainstay, moving from project to bigger project with his known attention to detail and his impressive work ethic, since working on the Iron Man Annual, Psylocke (his favourite superhero, who he feels honoured to draw especially since he’s following Jim Lee in illustrating her with her own title) and Hellbound 2nd Coming where he took the reigns from David Finch. 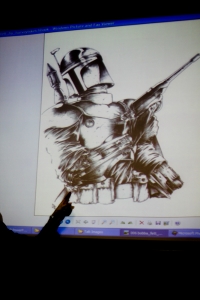 Finally, one thing he shared was about how he kept things interesting for himself when working, from hiding members of his family, their names or logos of his alma mater in the comics perhaps the best fun we had was spotting the hidden Pikachu and the hidden gorillaz in his sketches. He’s pointing to Pikachu in Boba Fett’s pouch above, but see if you can find the Gorillaz in the sketch here. 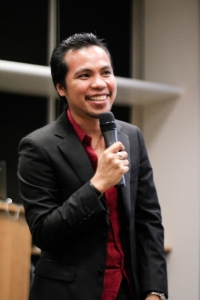 Always charming, animated and willing to share an anecdote or 2 no matter how tired he was (his walk of fame signing at STGCC went on for almost 5 hours), we continue to grow in respect for Harvey Tolibao and his work. And now with one more chance to meet him, why not drop by Absolute Comics at Bugis Junction from 2pm this Thursday? It is, after all, comics release day!
Tags
Harvey Tolibao National Library Psylocke STGCC