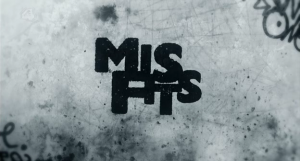 Misfits has returned to our TV screens! (If you’re in the UK.) A TV show based on the misadventures of 6 youths serving community service for various misdemeanors, this is definitely more than your usual teen drama – because these folk have something special placing them beyond ordinary folk. After being caught in a freak electrical storm their lives have been changed, being imbued with powers. If you’re looking for something similar, this is pretty much No Ordinary Family mixed with Skins, but edgier, sexier (well maybe not more than Skins, but more than No Ordinary Family for good reason), hipper, smarter, and way way cooler.

It feels like a really long time since Misfits last hit TV, but it’s actually only been a year. Those 6 episode seasons are over way much faster compared to 26 episode seasons in the US, so the feeling that it’s been a long time since the last season is a sharp one. A quick recap at the beginning of the first episode does go through the main beats of the last season to get us caught up, but due to the economic nature of a 6 episode season and how memorable the first season was, there’s really nothing that you’d’ve forgotten or wouldn’t easily remember.

So why would a returning show require a post on its own when I could have easily folded it into The Geek Seek? Mainly because I think everybody deserves to know about this, or have watched it at the very least. This is the very show which had its characters tweeting live during the episode even before Community started doing in season 2 (Misfits premiered 1 month after Community season 1’s first episode), but of course being groundbreaking isn’t a definite hallmark of a good show. What this little show does, it does well. Great exploration of powers without being exploitative. Great writing. Great music. Great cinematography. Especially great characters, on top of the really perfect casting. There’s is almost nothing I can fault it for – save for the 6 episode seasons, which appear to be the norm in the UK. 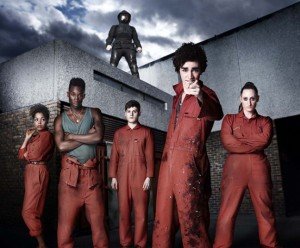 And we return to the 2nd season with a blast. Right off the bat we’re introduced (with more great music) to a new character, who’s been deemed “Superhoodie”. It’s obvious this is someone who has quite a bit of knowledge of the misfits and crazy pakour skillz. This character takes a back seat as we’re introduced to a blast from the past from one of the characters which puts the entire group in jeopardy (including the social worker, who’s the misfits version of a red shirt) and, well, hilarious yet serious hijinks take place before we’re introduced to the superhoodie once again. That’s hopefully just enough of a spoiler for you, and sorry if I’m being too vague, but I’d much rather you discover these characters on your own – it’ll be a massive reward. I’m hoping you give Misfits a shot, it’s highly recommended from me – and is THE best superhero TV show on, and with quality like this, it’s hard to see The Cape coming to knock it off its perch.

Are you ready for Matt Fraction?