With kill team just landing last Friday, some of you may have been wondering if the kill team box was worth the purchase. You’ve probably already seen how nice the terrain looks (spoiler: it’s great), but functionality and usability factors greatly into thoughts about purchasing terrain.

To that end, I decided to see: How modular could I make the terrain that came from the kill team main box?

Since I wanted modularity more than anything else, I would NOT be building it in the same way as the instructions. First up: really see what came in the box. 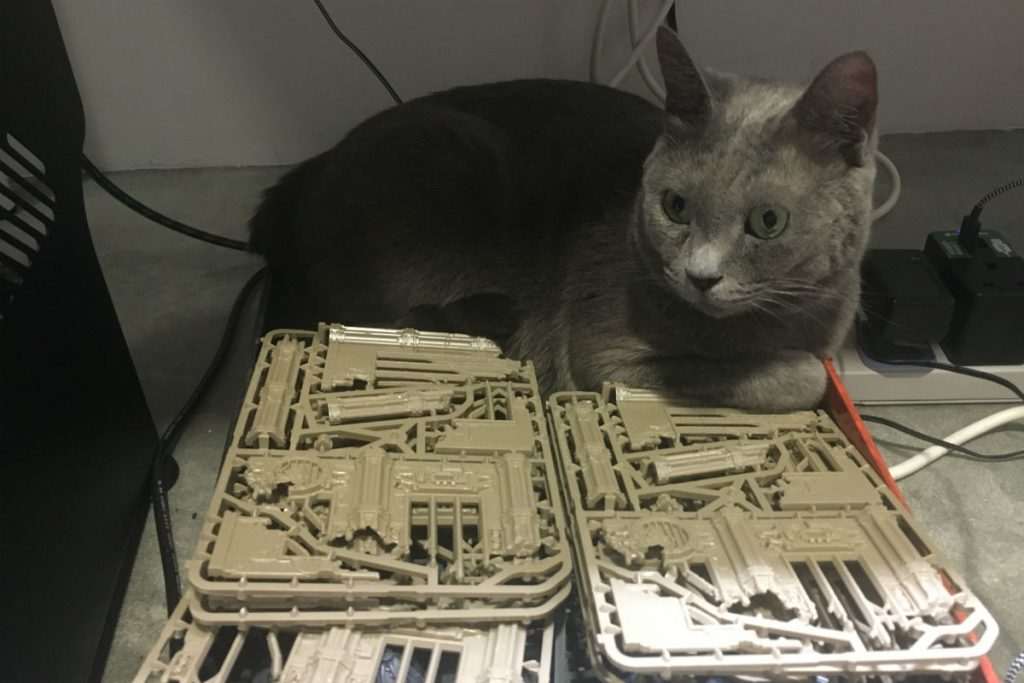 Actually, correct that. First: Get Cookie (my cat) out of my terrain. (FYI, the other things in the box don’t come in the kill team set. I figured that the box would house all the other terrain too.)

After that, I laid out all the sprues in the box. 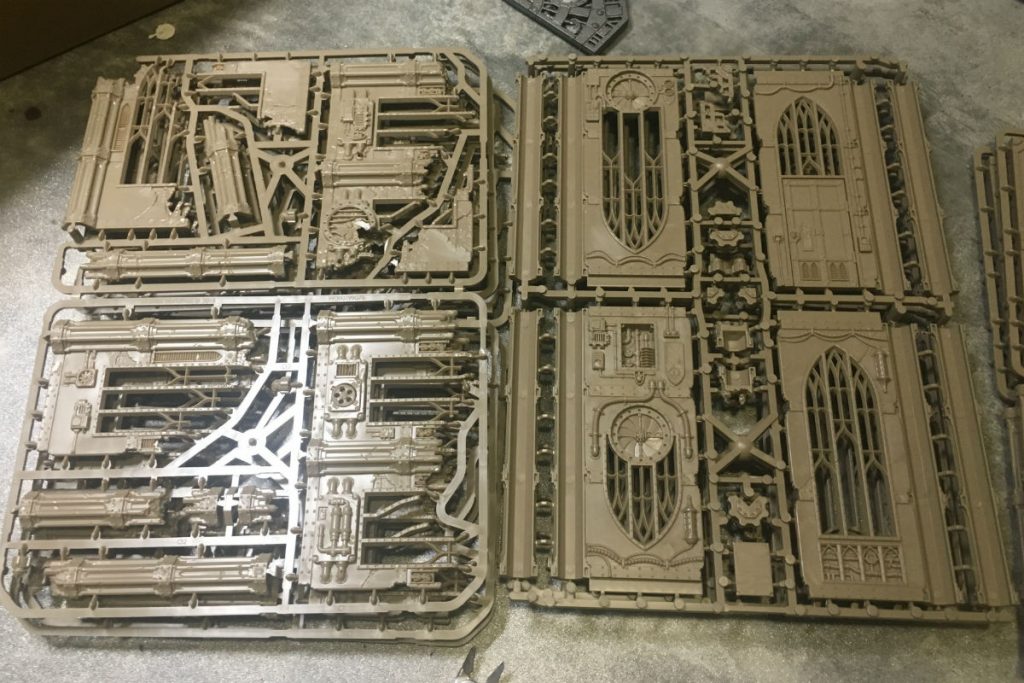 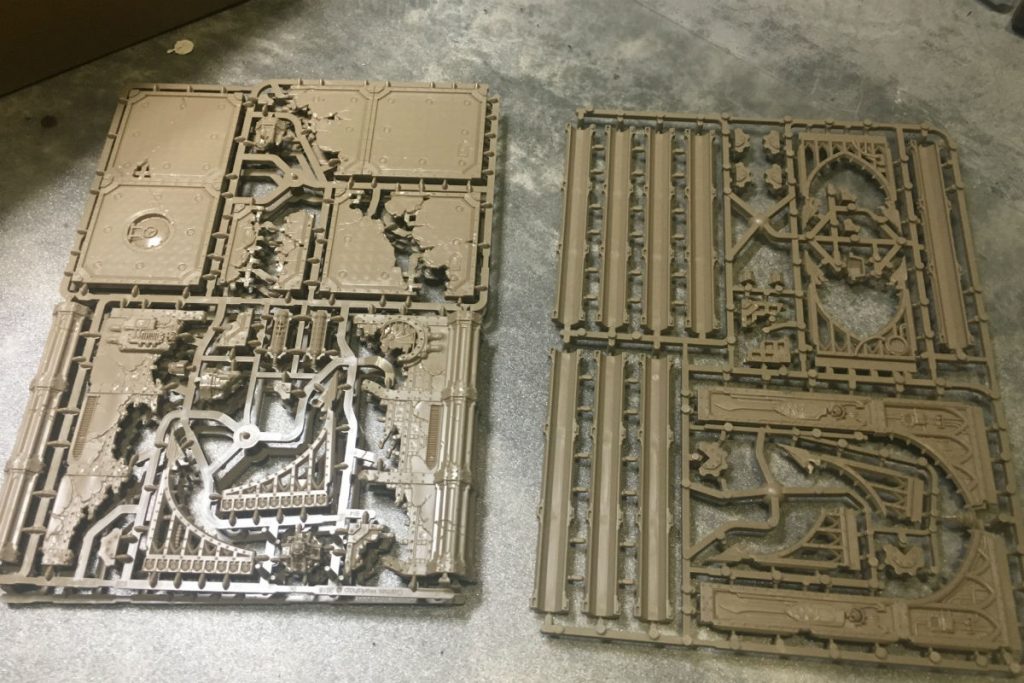 My plan was to build something that could serve as multiple one-level terrain, while providing the option to stack as of them as possible in order to get a large building. To that end, the ruins (wall sections that were lower than the full height) would not suit that purpose. The walls, tiles and archway would have to do most of the heavy lifting when it came to terrain building.

There are only 8 full wall sections. However, there are 4 ‘tall’ wall ruins (more or less the height of a full wall), as well as one archway (2 walls in length), and bits that when stuck together would make another ‘archway’. That 16 wall sections in total. I had much fewer tiles though. The equivalent of 6 full tiles, 6 half tiles and an assortment of useless rubble. I decided my ‘building’ would be a combination of two 4×3 wall sections, built for identical rotational symmetry. This way I would be able to turn it into one ‘building’ or stack them on top one another. The extra wall pieces would serve as a way to heighten my building further if needed.

I would have to use my tiles sparingly.

I built the ‘archway’ first. It was godawfully fiddly (since I think they were supposed to be buttresses more than an archway), but after sticking the tiles on to shore it up it was a lot more structurally sound. 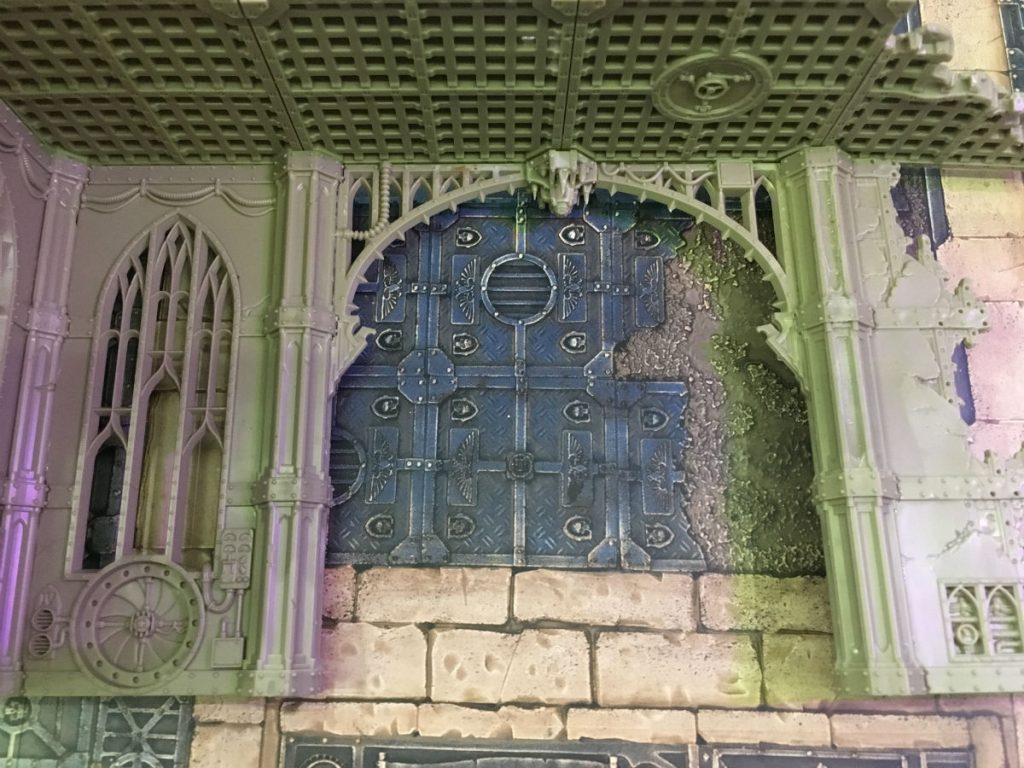 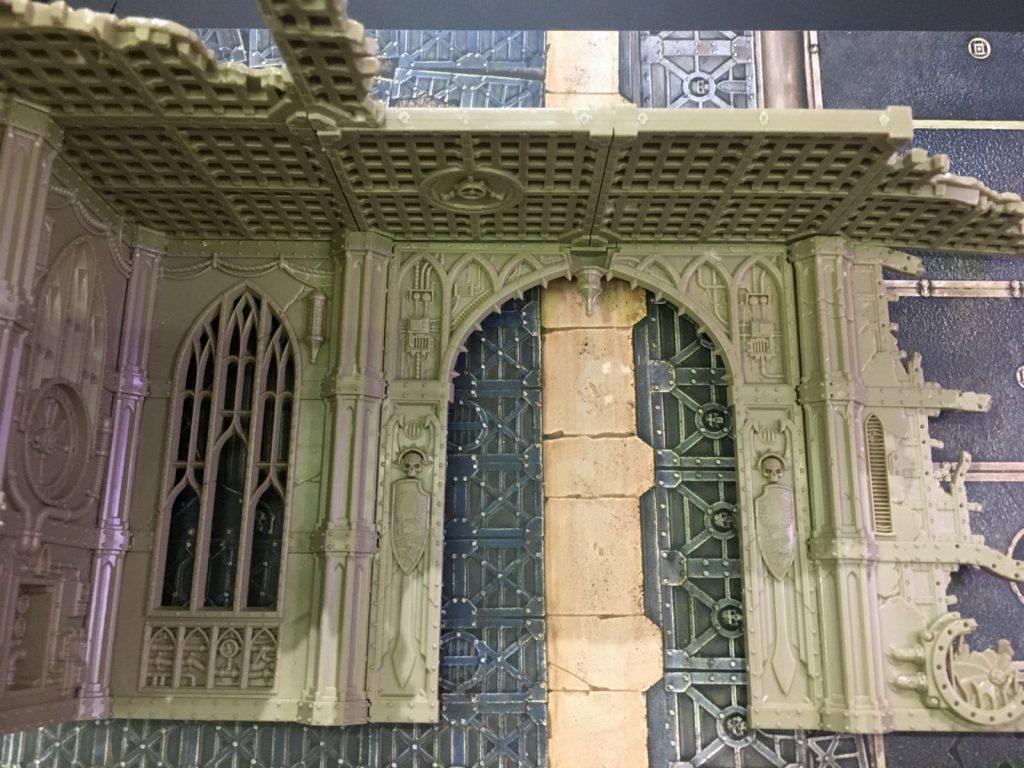 I built the second set identical to the first. 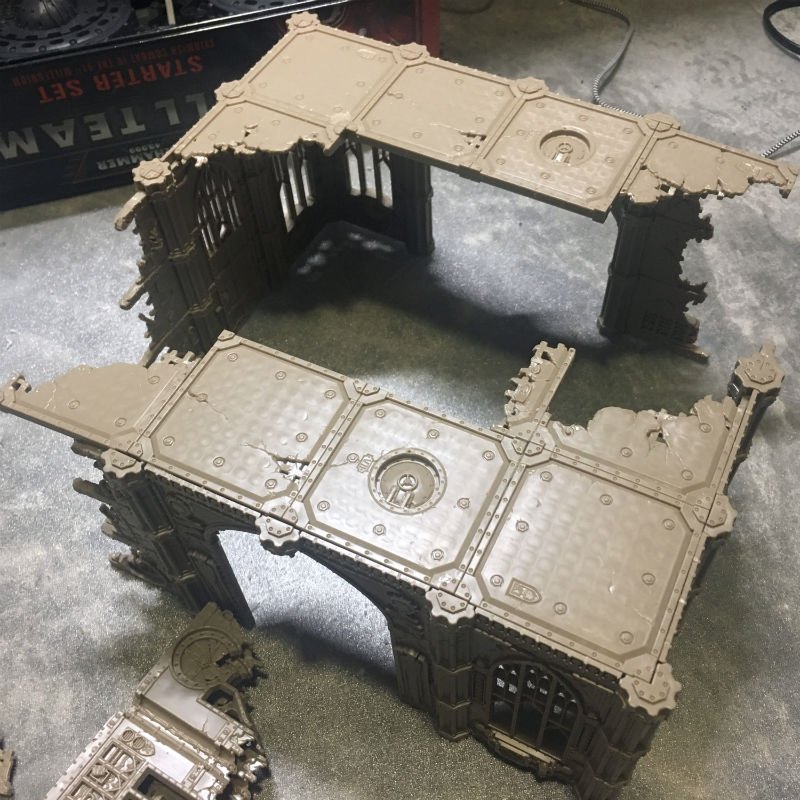 One more reason I didn’t want my pieces to be too big was because the tiles didn’t have any support aside from the side walls. The kill team box came with a lot of pillars, and I think some of them were meant to be supports, but if I wanted to be able to stack all the terrain together, I would need to not have anything in the way.

After that I added the pillar bits to make the terrain level with the tiles. I started running out of these bits, which told me I might have an issue down the road. 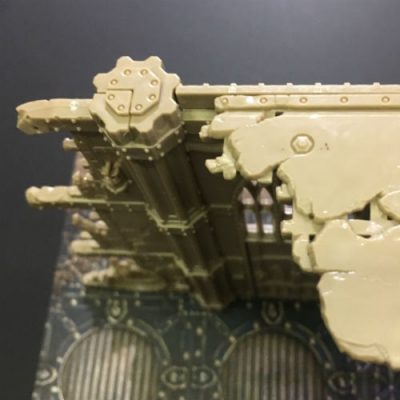 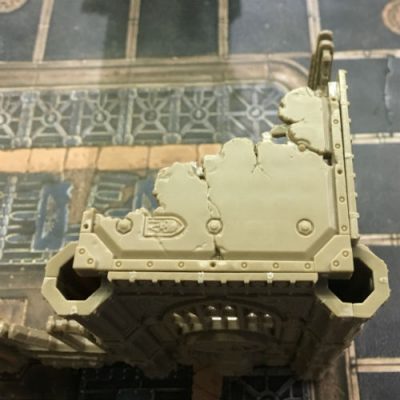 I then built a 1x3x1 section of wall with the 2 full walls I had left. My plan was to use this third section to ‘lock’ the bottom two pieces into place by stacking it on top, and it largely worked. Except for that…. issue mentioned. 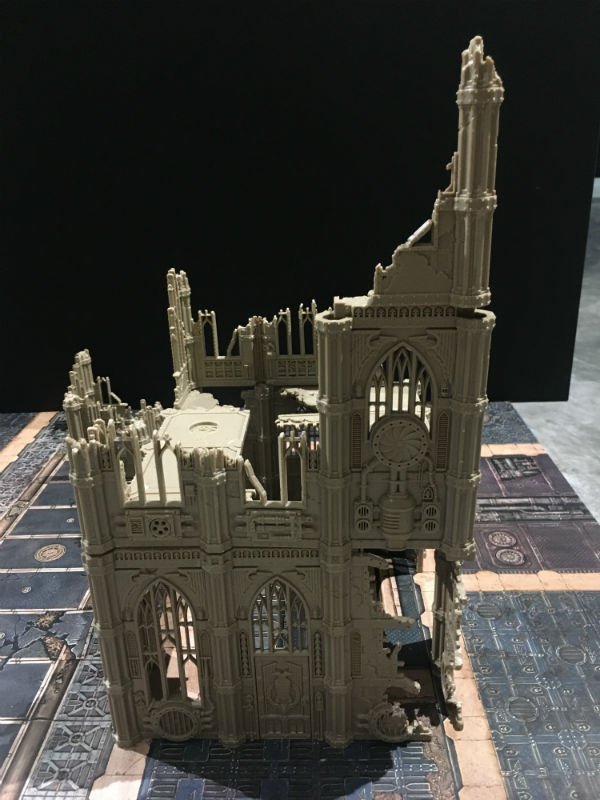 Even then, I think it was largely successful. The huge number of ruins meant a lot of small scatter terrain, and I think I will be able to figure out a way to kitbash or sculpt an alternative to the gaps (which really only affects one piece of terrain). There’s a lot of ‘ruined pillar’ tops that I didn’t use, they’re meant to cap off pillars, but I couldn’t use them because then the next level wouldn’t be flush. I might see if I could use them as alternatives to the bits I’m missing.

And look how well the terrain holds up! 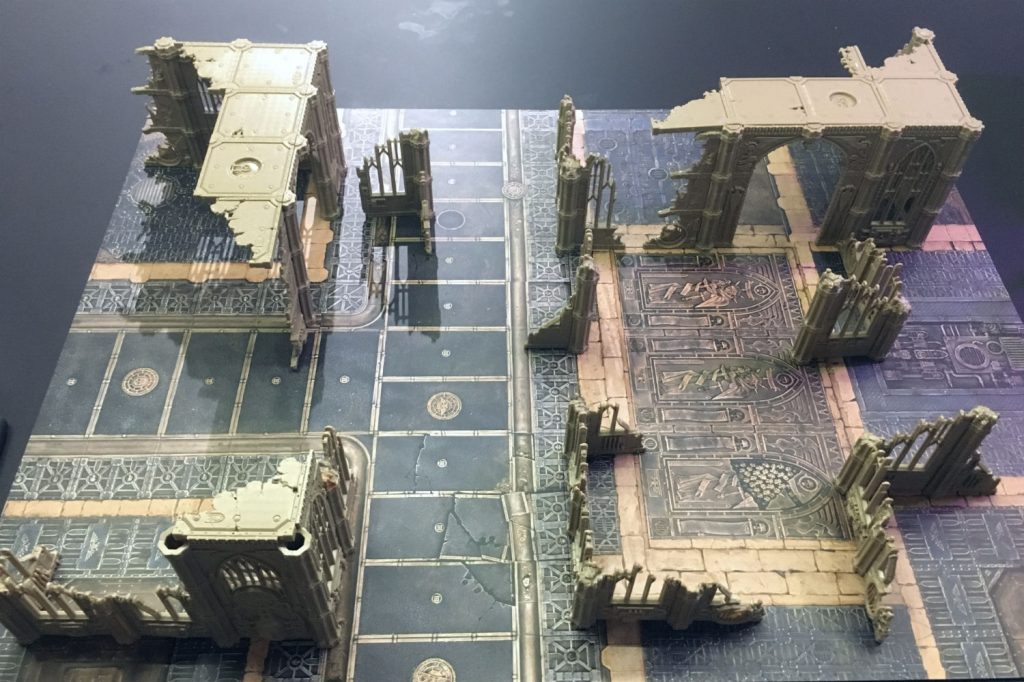 If I stack it to one level, it comfortably fills up the kill team board which… well it was built that way, so no big deal. However, I can stack it to two, three, and even FOUR levels! 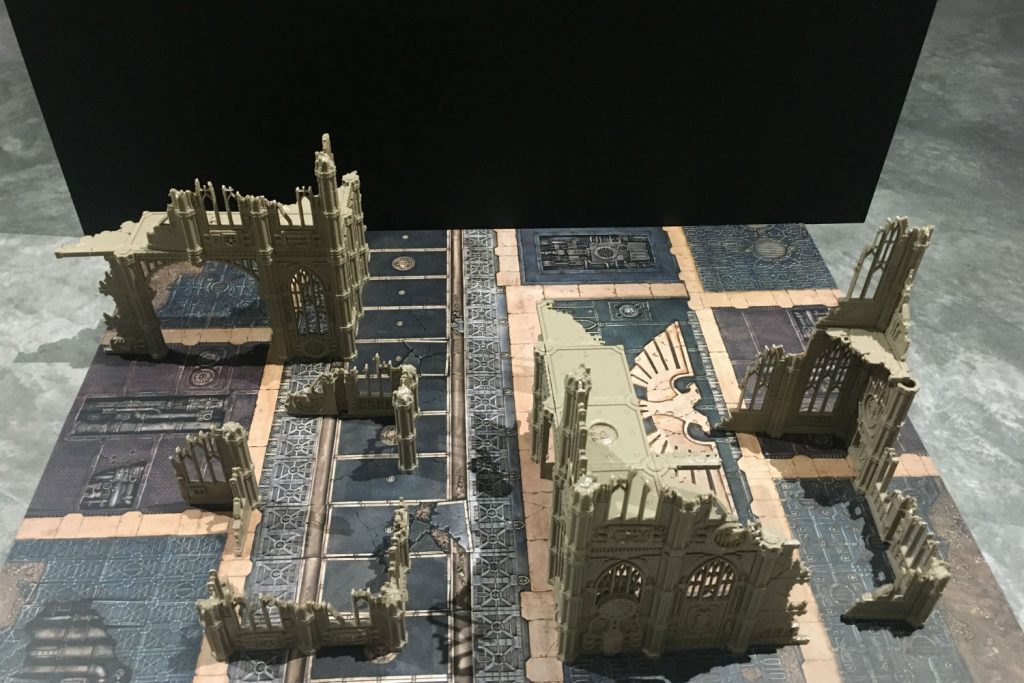 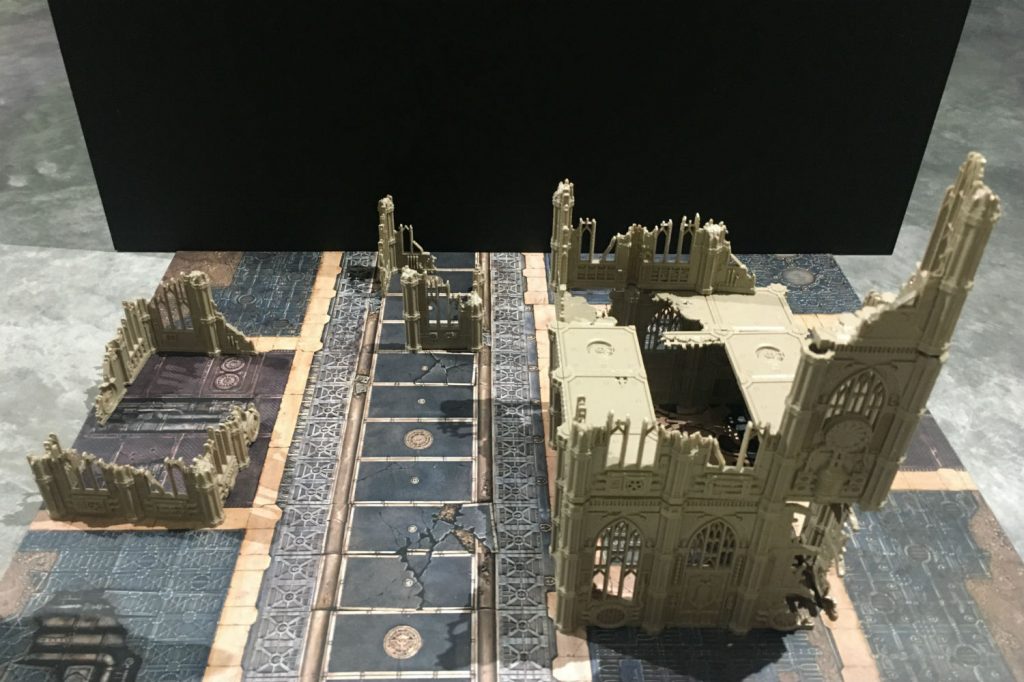 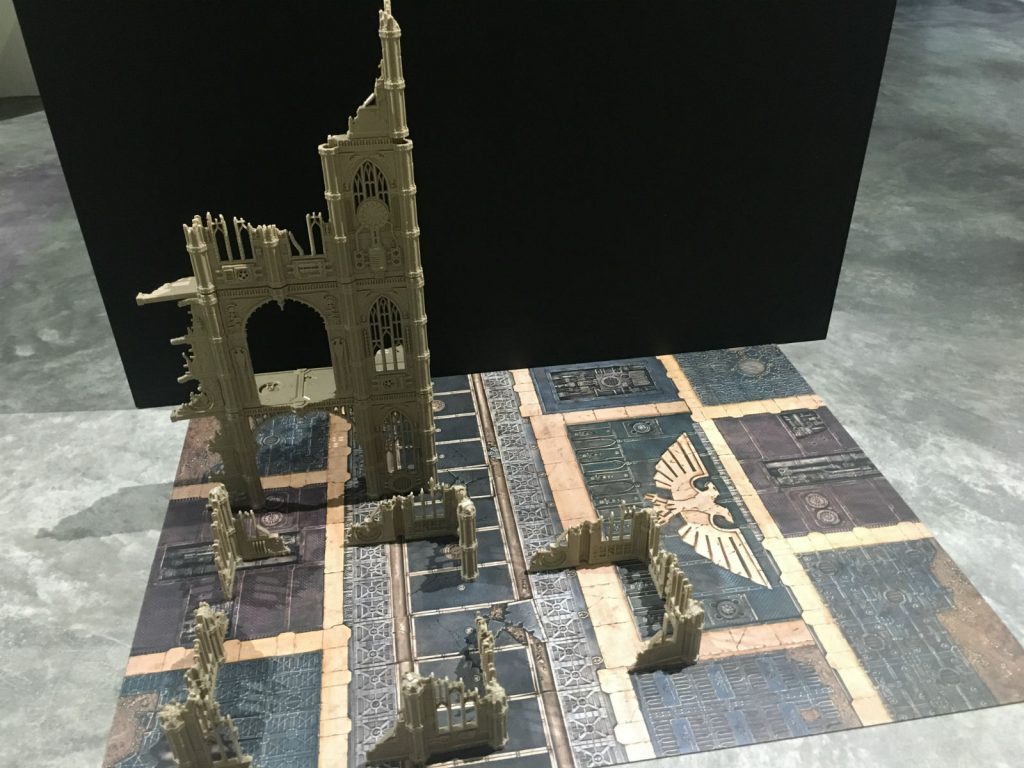 It occupies much less board space of course, but you can always fill it up with more terrain. Not an issue. The option is nice to have.

One thing though is that even though the pieces are meant to ‘lock’, they don’t do so perfectly. I suppose that when I was joining the pieces together I might not have done so in a perfect 90 degree manner. Something to plan for if you’re building something like this. But for now some blue-tac will have to do.

This, however, is what I’m most proud of. 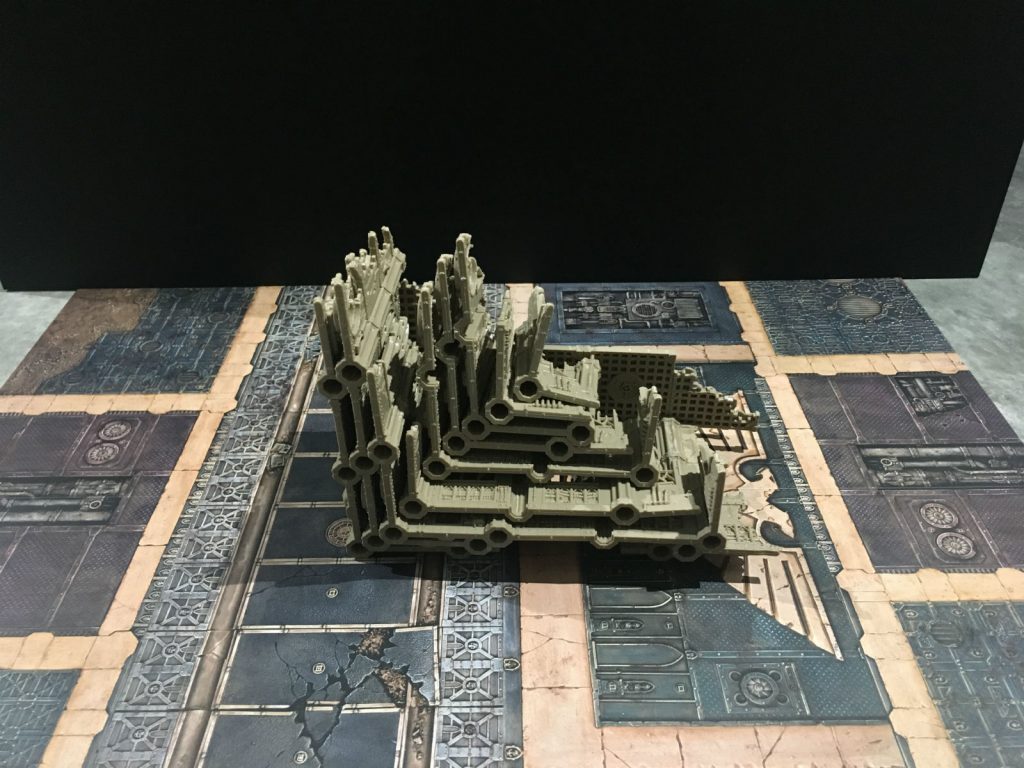 Look at how well EVERYTHING  stacks! Everything is only one wall tall! And only one piece (the 1x3x1 wall) is ‘C’ shaped. Everything else is an ‘L’, which means they fit really easily. This helps any owner of terrain immensely. Whether or not you’re an individual owner or the FLGS, you need your terrain to pack as compactly as possible. 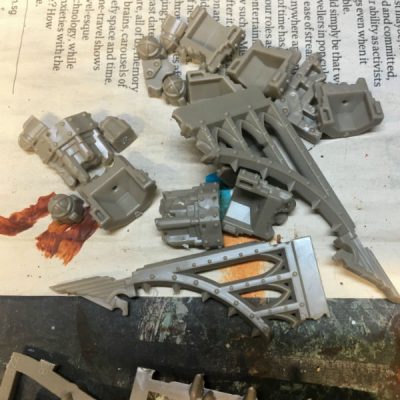 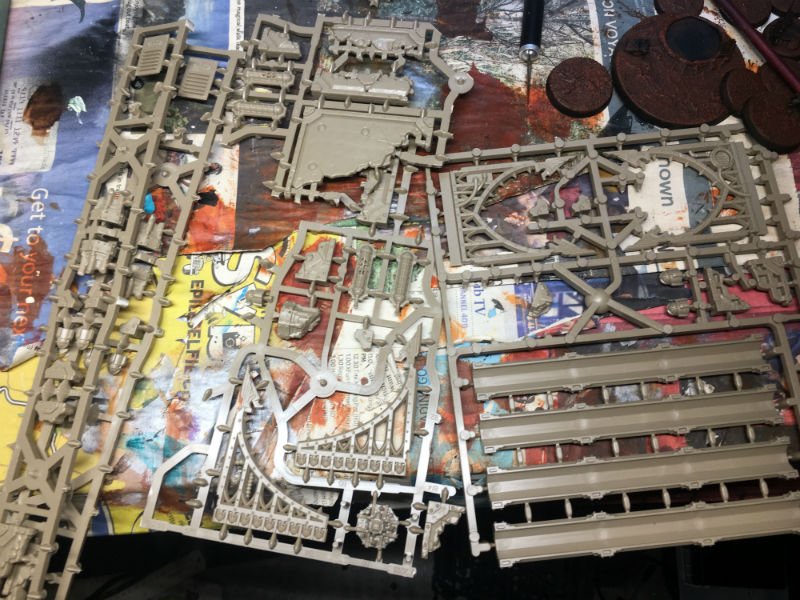 I have a few more pieces I didn’t use, but they seem to be mostly decorative, which means I’ll keep them in my bits box until I need them.

So that’s it! As you can see, the terrain in the kill team box is immensely flexible.  I kinda want to paint the terrain, but in all honesty I have a lot on my list to complete. I need to tackle my kill team, orks and quite a few other big models before I get back to the terrain. But I wanted to sink my teeth into the kill team terrain to help any of you who may have just bought the box recently too. Hope my build helped you think through how you want to assemble them, and see you next week for more Tabletop Thursday! 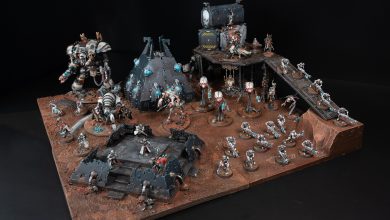