Man, the Nightfall scenes are ever a-changeing. Going by the map reports, each different island probably changed hands  I think this is a testament to how fun this is to the Casual Gamer, that no matter how much or how little he plays he really contributes to the league.

And this week I decided to take my trollbloods out for a spin, if only to play around with the Trollblood league units. 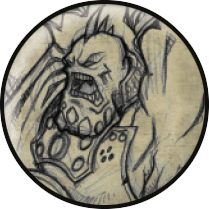 Now let’s talk about Fellblades. In my head, I like to think of them as unlucky Fennblades that were walking around minding their own business in the Cryx islands, and then spying some swords lying around. Then they pick it up and…. all hell breaks loose!

Stats wise, they’re more or less the same as Fennblades except they lose their vengeance and tough for +1 POW, Magical Weapon, Spell ward and Berserk. And I think they have 1 less CMD.

This means 1 thing: They get a lower threat range (loss of vengeance) for a stupid powerful offensive punch. POW 13, Weaponmaster? That’s going to smash through EVERYTHING! And we’re not even talking about Troll Buffs yet! Spellward is even more awesome on Fellblades than the original Doomreavers; we have so much non-magical buffs that even with spellward we can buff them to truly outrageous levels. It didn’t happen, but can you imagine? With just a fell caller and chronicler (and a ‘flanking’ beast) you can get them to MAT 10, POW 15 + 4D6! Spell ward doesn’t even matter with some warcasters, when their spells (like surefoot or starcrossed) don’t need to be targeted to have an effect.

Of course, that is barely ever needed. The only thing that you need (and I say this is absolutely integral) is a Fellcaller. Fellblades are MAT6. Needing 7s on your average infantry (Def 13) is iffy. But that +2 MAT from a Fellcaller means that they can carve through troops and really threaten warcasters and warlocks. Run them with two if you can, so you are ensured that they will get the MAT buff they need. Thats all I needed; one Warcry’ed Fellblade put the smackdown on a Mortenebra camping focus. 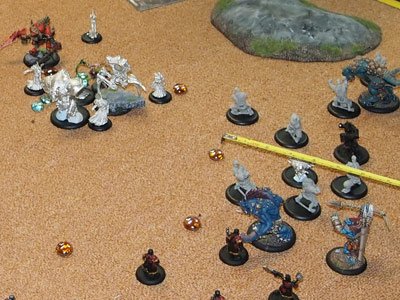 A second trick is probably run them in two waves. A unit of 10 weaponmasters for 8 pts is a steal, but you never need so many in the front line, especially since they have Berserk. A second line allows you to keep your support units safe in the back as well as providing a countercharge ‘unit’ available to sweep in when your first line falters. That’s the exact thing that happened to me in a game this week. I had Fellblades collapse a swordknight unit, chain lighting (and shooting) killed most of the unit, but the 3-4 that were left were sufficient to clear out the rest of his front line, allowing Grim a clear shot at Haley. 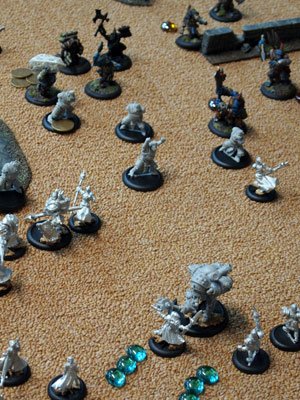 So, let’s recap. Bring non-magic buffs, make sure they can hit, and run them in two lines. If the Fellblades can hit it, trust me, they can kill it.

Tell us how the Fellblades worked for you this season! How’re you finding league-specific models?