Games Workshop is on a roll, with the reveal of the incoming Tomb Kings, the 2nd wave of Dark Eldar, more fleshing out on Grey Knights info, and quite a bit more stuff. Privateer Press on the other hand has been a bit slower on their info, releasing only the may releases, as well as the stats for the Retribution Arcantrik Force Genrator. Well… kinda. 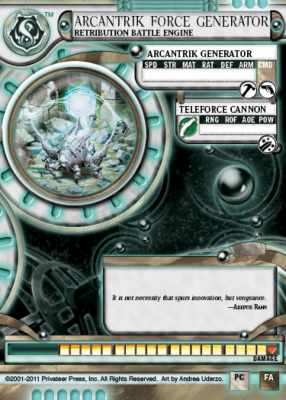 But that’s just me. Suffice to say it’s going to be shoot big glowy balls of death.

Among the may releases are also repacks of the WM support models like the mechanics, as well as resculpts of Cryx Bane Thralls, and interestingly enough a new unit of Farrow Slaughterhousers. Considering they come 6 in a box, I’m guessing medium based multiwound models. Something to equal the Gatorman Posse. 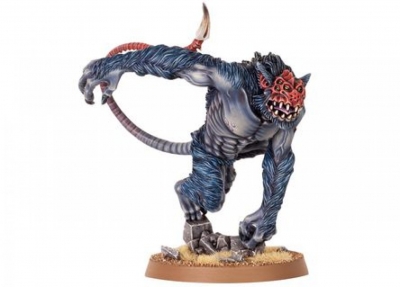 On the other hand, we’ve got scads of WH 40k and Fantasy stuff this week. Foremost on everyone’s minds are probably the Grey Knights and Dark Eldar, with further details on the Grey Knight Rumours, as well as the announcement of the Dark Eldar second wave. From the looks of it, Grey Knights will still be that uber awesome army of doom (and like a 20-30 model count army no less, considering how expensive paladins and the characters are), and I have to say the Dark Eldar Beasts are looking teh SWANK. The clawed fiend looks like real fun to paint and skinless beasts are always creepy as heck. Of course, I don’t know what Dark Eldar players are going to do to that huge hit on their wallets, what with all the beasts being 40mm minis that are all in pewter. ;p 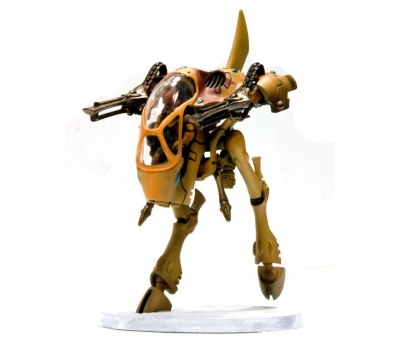 The last bit of 40k info are the new Wasp War Walkers from Forgeworld. With jumpjets, super speed and being able to assault after that leap, I can say that most Eldar players are going to take that whenever they can. Considering they’re still experimental rules though, I don’t know how likely that’s going to happen. Still, the Forgeworld units and vehicles seem like a much needed shot in the arm for the Eldar players.

Warhammer Fantasy is also maintaining its momentum, with the announcement of the new Tomb Kings army book hot on the heels of the Skaven and O&G. The Tomb Kings have long languished under the yoke of an old codex, and it’d be nice to see updates on both their rules as well as sculpts.

That’s it for this week. I’m really interested in seeing more PP Battle Engine info, as well as further announcements of the Tomb Kings this week, what about you guys?