I like Deffkoptas. They’re a nice model. But I didn’t like the whole kartoony chopper asthetic. They’re cool and all, but I wanted something swankier for my Orks. Besides, all of my AOBR deffkoptas being Orkbuggy/walkers. >.>;; 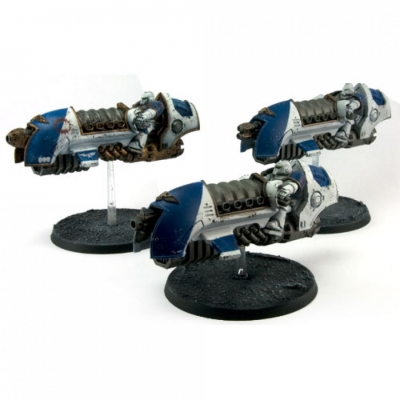 Deffkoptas are supposed to be jetbikes. So, why not jetbikes? Like proper, landspeeder-y jetbikes? Forgeworld has some for the space marines, but they’re MUCH too expensive, so how about somewhere else? 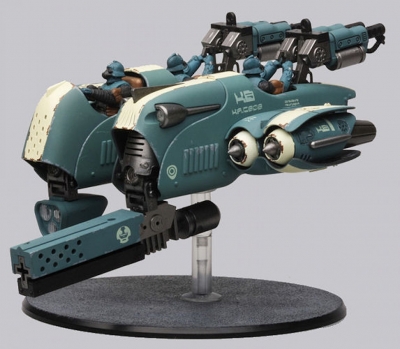 Cue the Karmans. A gorilla race from rackham’s (I’m pretty sure now defunct) pre-painted AT-43 line, the Karmans were a bit larger than the other humanoid races and therefore more or less the correct scale for Orks. They also have kiiind of the same silhouette as the FW jetbikes (Any space marine players want to look this idea?) The best thimg, because I don’t think anyone plays them, you can get them for really cheap. If you can find them anyway. I bought these 2-3 years ago, but never got around to modding them until now.

As you can see, some of the Karman aircraft came in doubles, which I didn’t want. Also, for some stupid, inane reason the gorillas faced backwards. You definitely can’t have that in the Orks; they drive bad, but not THAT bad. So some hacking was going to be in order. While the original Karman aircraft had two engines a side, I didn’t have enough engines to go with all the bodies I had (making 4 jetbikes, had 13 engines). Also, the two engines made them kind of larger than I cared for. So I chopped off the wings, sliced them in half, and gave each jetbike 2 rather than 4 engines. You can see the before and after below. 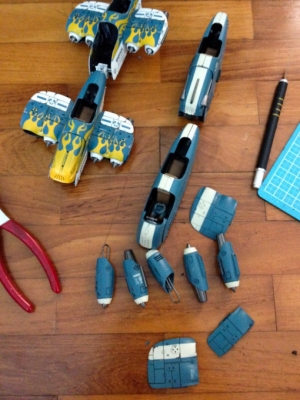 I also wanted to move the engines further to the rear. Really give them a landspeeder kind of look. I only greenstuffed and superglued the wings on, so they’re kind of fragile, but I didn’t want to do a serious build and pin everything through. The AT43 plastics are kind of flimsy anyway. 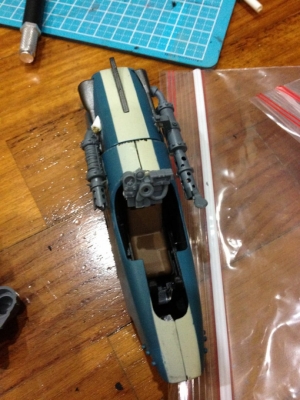 After the hacking came the fixing and Orkifying. Here you can see me adding the exhausts onto the jetbikes. Some were stolen off the Trukk and Battlewagon Sprues, others were made from plastic tube. 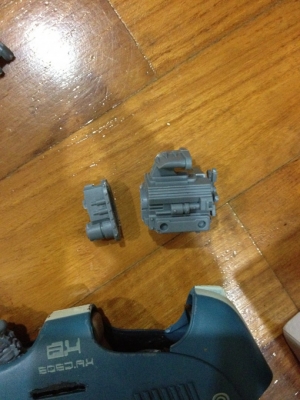 One of the jetbikes also got an open-topped engine from the Ork Trukk set. It was too large, so I had to cut a bit off. Don’t worry. I used it somewhere else in the Jetbike. 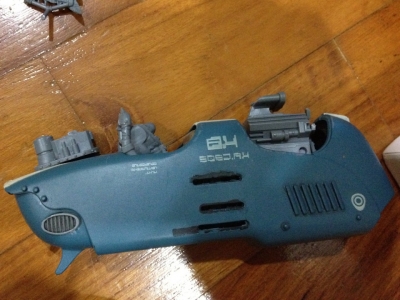 An Ork Mek never lets something go to waste. 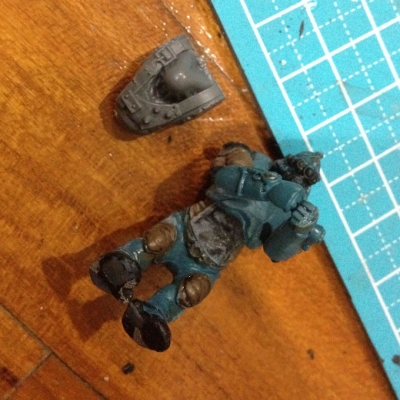 As you can see, I had some Ork drivers to use as the pilots, but not enough. However here you can see the comparison between Ork and Karman bodies. I just popped off the Karman torsos and frankenstein green-stuffed the Ork torsos onto the gorilla legs, with the Ork jetbike pilot’s hands for steering. They looked kind of freaky, but considering it was all going to be painted over and situated in the seats, I figured no one would be looking that closely. Plus if you’re looking at an Ork’s crotch something is seriously wrong with you. Either way I flipped all the pilots around to make sure they were sitting in the right direction. 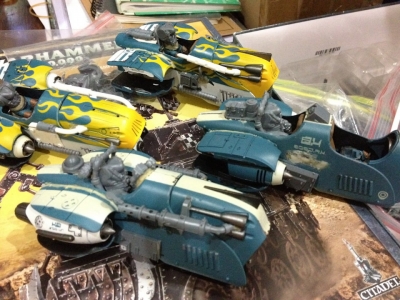 Lastly, I added some bits and greenstuff to the sides of the jetbikes to kind of hide where I cut off the wings, as well as for further detail. You can see that I’m a much poorer modder than I am a painter. Here they are more or less assembled. 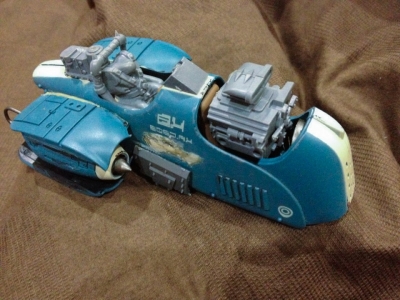 And a close up of one if you’re interested. 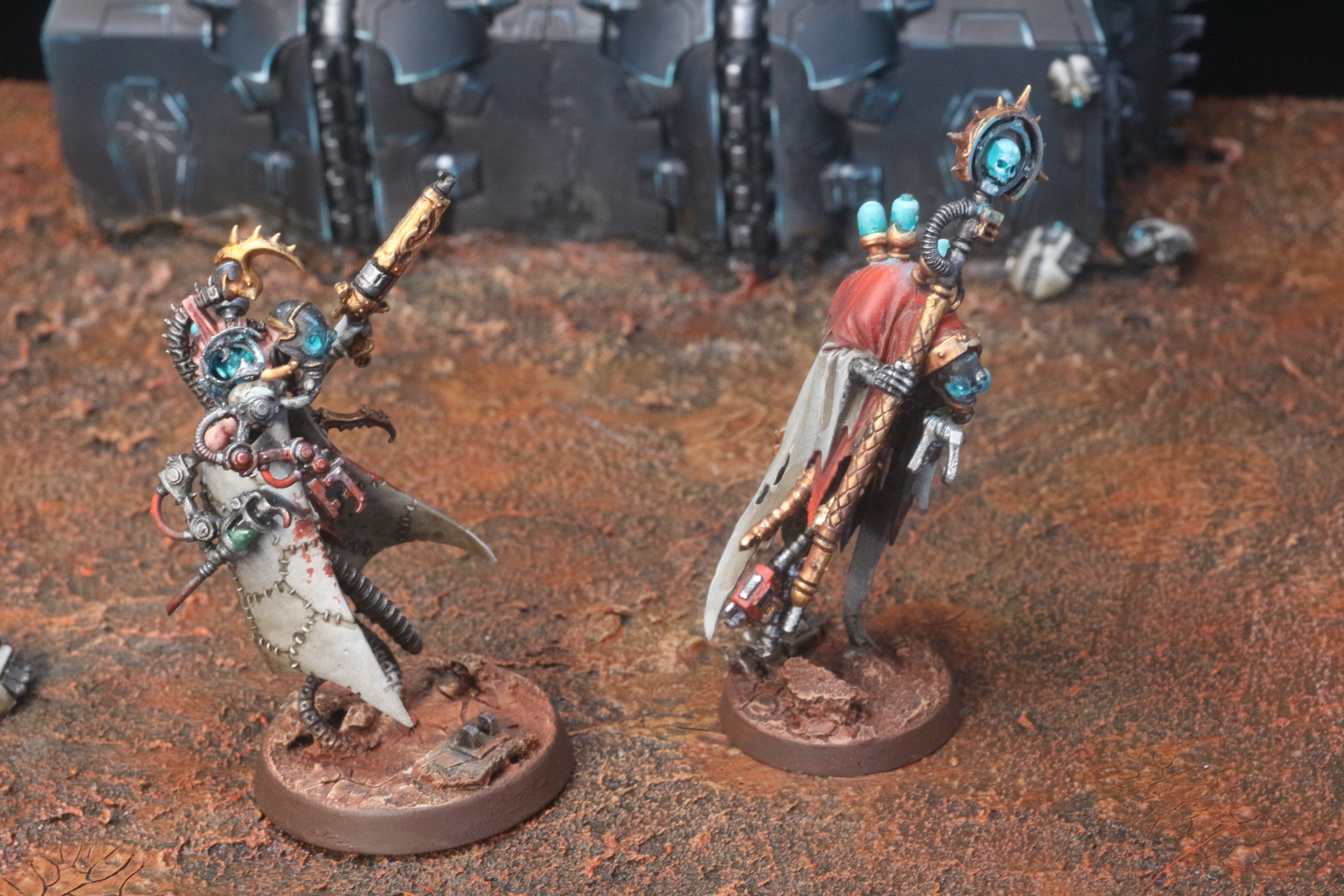