Hordes is known as the wilder, younger sister of Warmachine, and I could say that I agree with that sentiment. It’s fully compatible with Warmachine, but has a different mechanic, and showcases monstrous beasts, rather than the hulking warjacks as seen in Warmachine.

I also play a faction/group in Hordes, the Trollbloods. Like Khador, it’s seen as one of the more direct armies in Hordes, in your face with a lot of giant meaty monsters, but it’s not as similar as one might think. 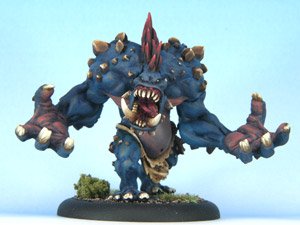 As giant blue scots, the Trollbloods are quite possibly the closest thing to a ‘good guy’ in Hordes. All the other factions are invading, or eco-terrorists, but the trolls really just want a piece of land and to be left alone. And even then, they’re not that virtuous, with some violent tendencies of their own. 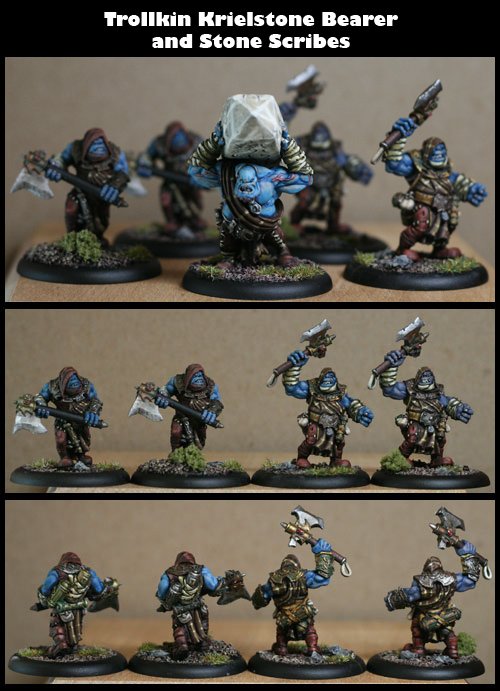 I suppose Trollbloods could be considered the ‘noble savage’. They have villagers, raise up their heroes in word and song, and have symbiotic relationships with full blooded trolls and even larger monsters called diretrolls. Game wise while they are relatively slow and melee-heavy like Khador, they’re an army that is more worried about synergy, where each unit or model works together to form a greater whole, rather than Khador, where their models are more independant.

Just like Khador for Warmachine, I play this army for its models. Their beasts (the trolls and diretrolls) have a lot of exposed skin, which is a welcome difference from the armour plates of Khador’s warjacks. Their colour themes are also very very different from my other army, and it’s a great joy to play with more natural, earthy tones (blue skin aside of course).