Wait, wasn’t the unboxing just yesterday? There’s more Warhammer 40k stuff already? Well, remember how I said the Dark Imperium Starter set was great? It’s so great that I couldn’t keep my hands off them and I tried to see what I could do to put my own spin on them.

When I first heard that Dark Imperium (Warhammer 40k’s 8th Ed starter set) was coming, I was super excited. Frothing at the mouth excited. New super detailed Death Guard! Maybe I’d finally start building that Death Guard Army I wanted! I was sincerely expecting the level of assembly freedom that was seen in recent GW box sets like Betrayal at Calth. Imagine the conversion possibilities! I even went to get copies of the MkIII armour variants (the go to armour for Death Guard) in preparation for the conversions and kit bashes I’d be undertaking.

So imagine my disappointment when I found out they were multipart, single pose models.

That disappointment was kind of alleviated when I broke open the 8th edition box yesterday. Yes, the models are single pose but the number of parts and level of detail are amazing! Plus, I admit that giving beginners a box of mix-and-match bits and saying ‘go at it!’ might not have been a great move. With a starter, you have to keep it as pretty as possible, and as simple as possible. You need to hook them after all. The multi-pose models will come soon enough. Plus, I was super amazed at this specific Plague marine: the body and legs are the same, but look how different it is just by changing the head and arms! 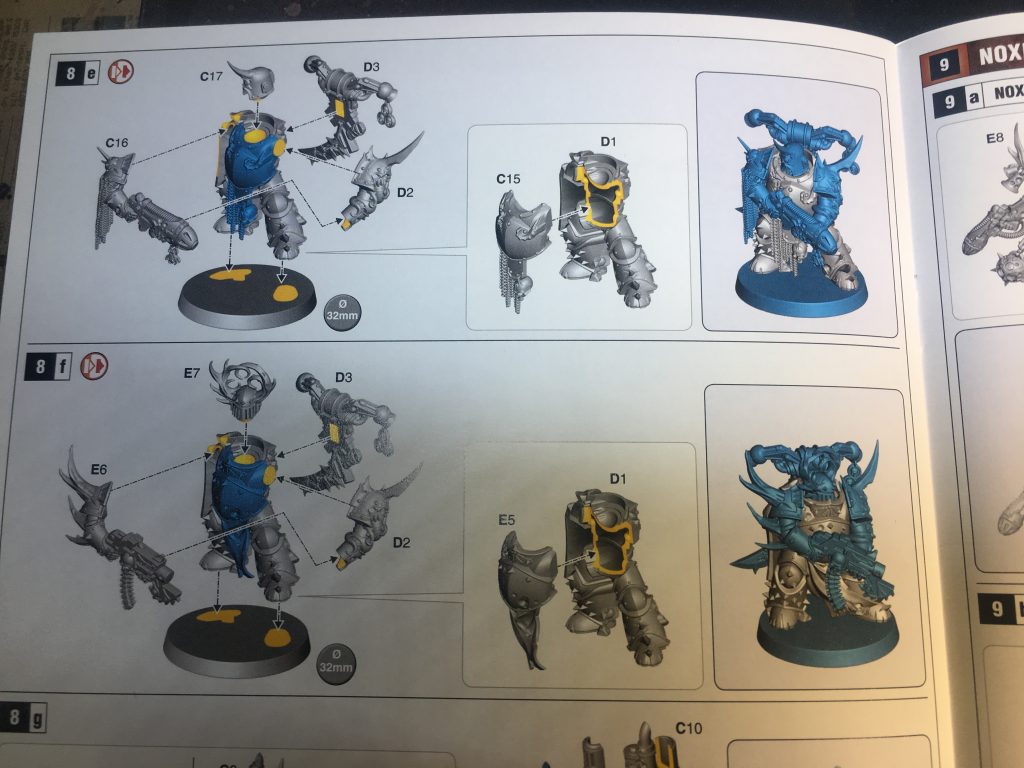 That being said, I wanted to see if the Primaris Marines and Death Guard COULD indeed be converted. Plus I wanted to provide some resources and help out there for people who were looking to convert as well. So ON to the minis.

First up, I remember Game Workshop saying that the Primaris Marine heads and shoulder pads could be mixed with normal Space Marines, but that arms and legs would be trickier. Time to check that out. 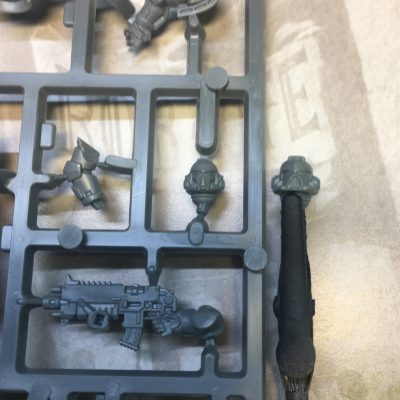 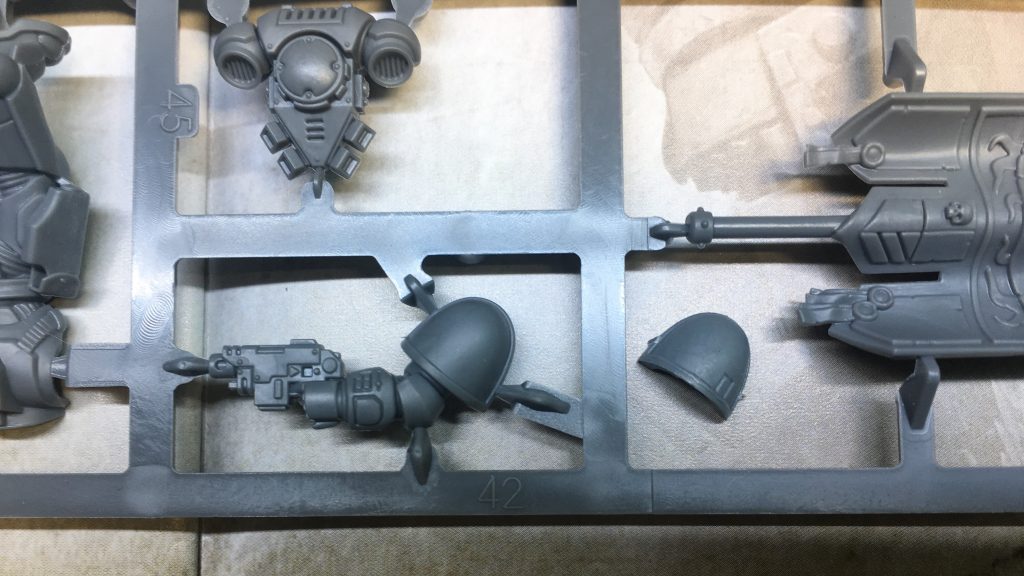 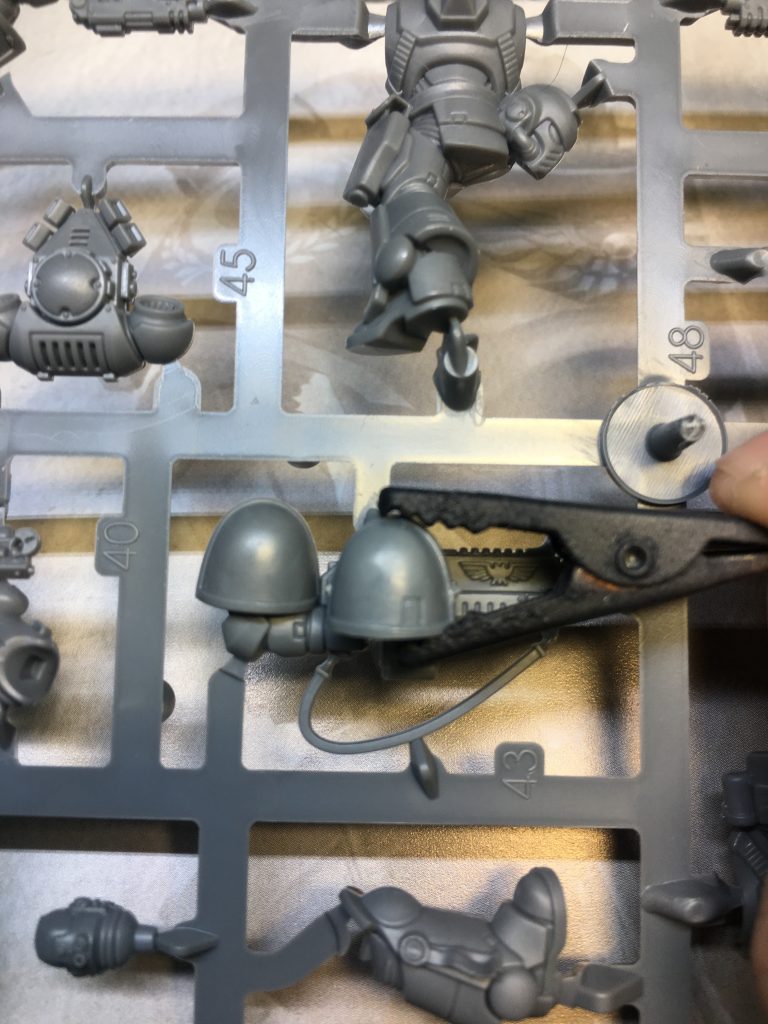 However, the arms of the Space Marines are definitely shorter than Primaris Marines. You can remedy this slightly by positioning the shoulderpads higher to try to lengthen the arms that way, but it’s pretty obvious even when unassembled. 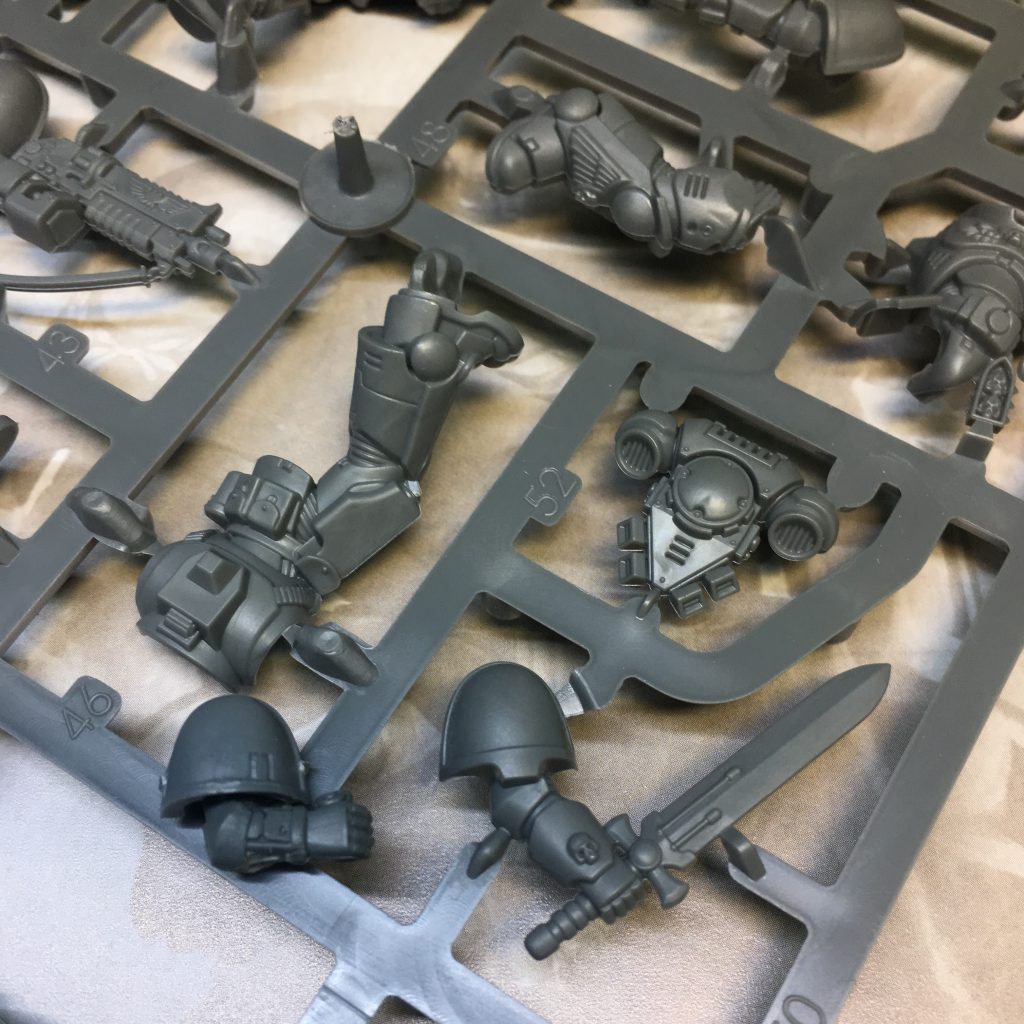 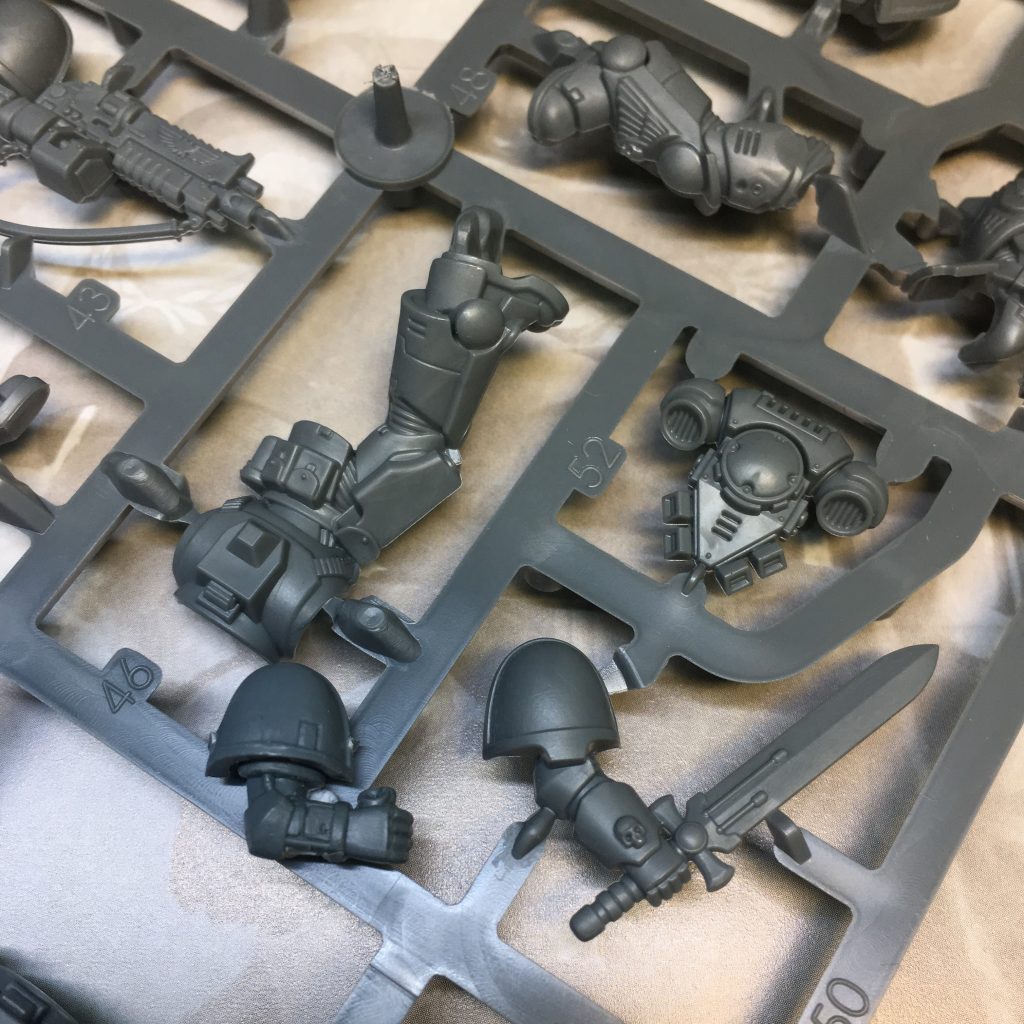 It seems that for Primaris Marines, the arms and shoulderpads are mainly together. Which means that if you do want to change the shoulderpads, you’d have to cut off and keep the arms. Backpacks are (of course) another bit. 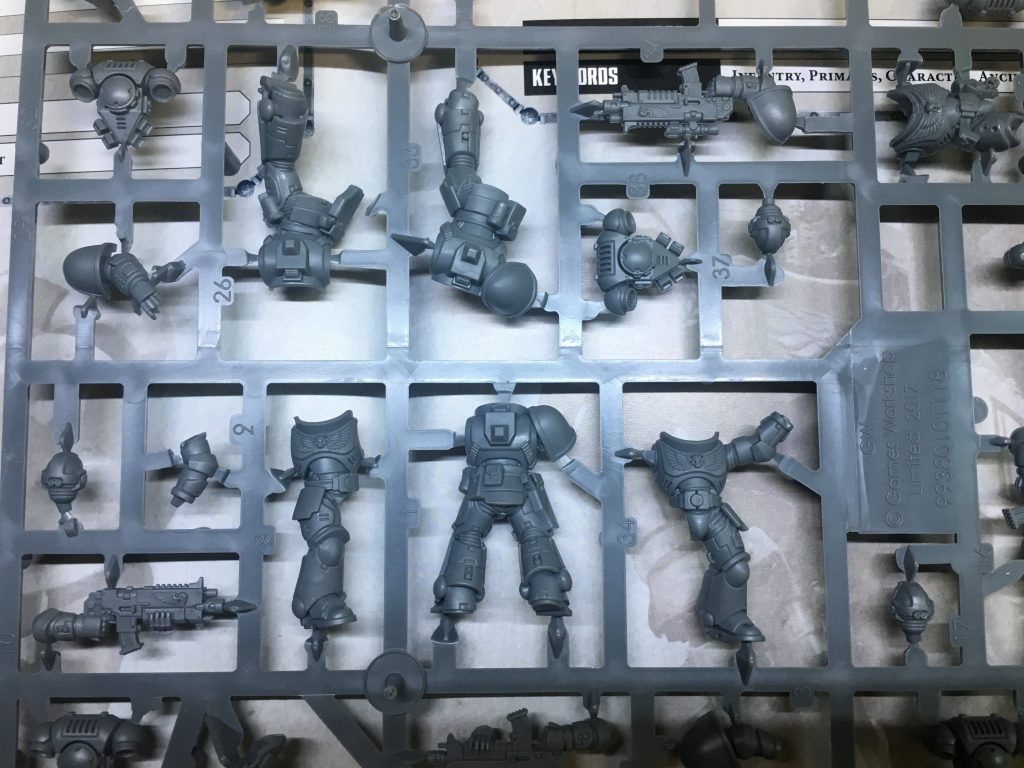 I think shoulderpad, backpack and head swaps are likely going to be the only (relatively) easy conversions. However, Primaris backpacks are also slightly larger, so whether or not you’d want to mix and match them is up to you.

Next up: the Death Guard.

FYI I am using the MkIII armour you can get from the Burning of Prospero because I feel that’s the go-to Death Guard armor (and judging from the Dark Imperium sculpts, the GW team felt that way too). 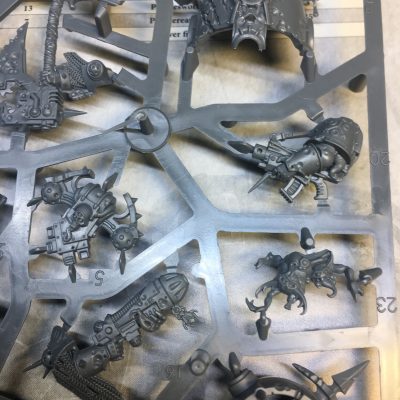 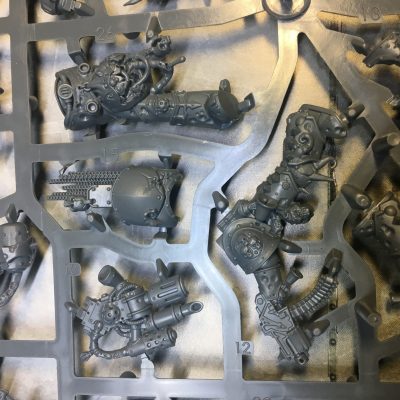 Like the Primaris Space Marines, there are some Death Guard bits with the shoulder pad and arms as separate pieces. The backpacks are also separate. 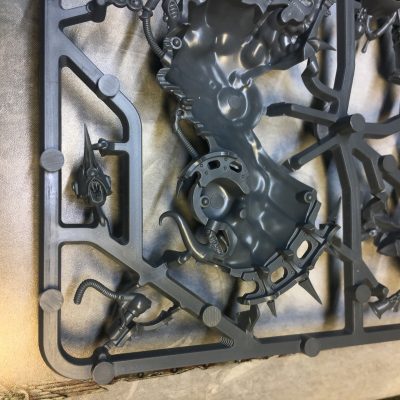 Unlike the Space Marines, most of the plague marine heads come attached to either the arm or the torso. There are however 1 or 2 models with the head separate.

The good thing however, is that the size difference between the Death Guard models and MKIII isn’t as obvious. The difference is mainly in girth and breadth, as opposed to length and height. 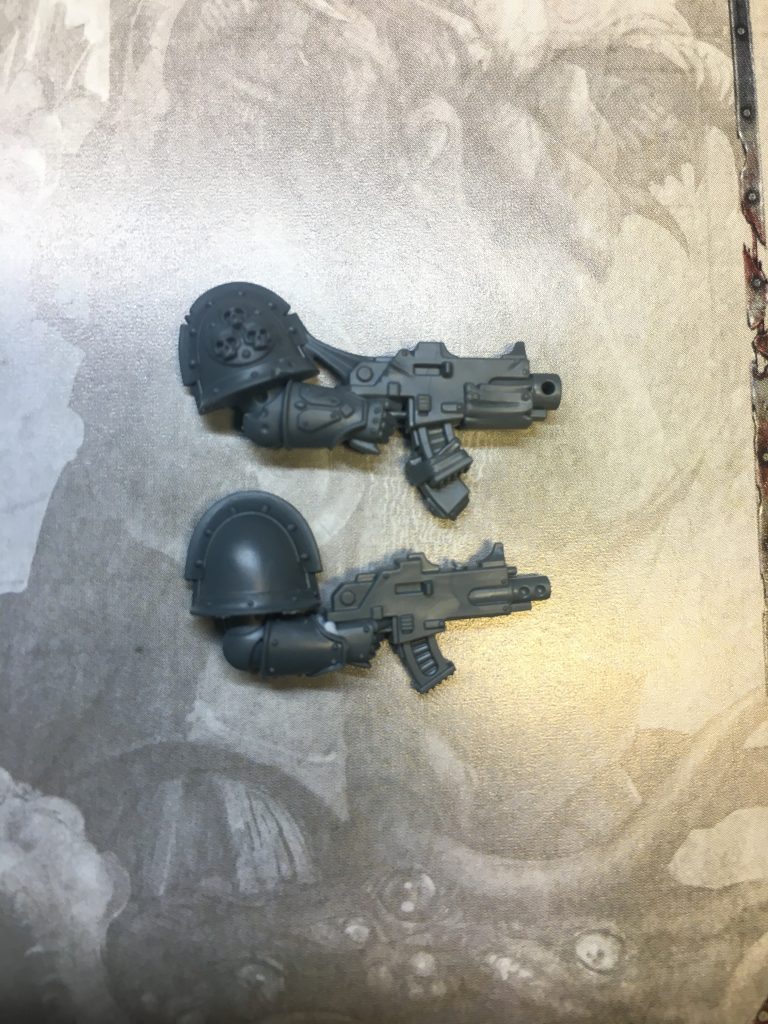 As you can see, the upper arm and forearms are almost of the same length. The MKIII arm and bolter is is a bit thinner, but that’s about it. One thing to note: Most of the Death guard plague marine bolters have the arm molded along the muzzle. Which means you will have to cut out the MKIII hand and save it to transplant later. This is actually pretty easy, because the MKIII and Death Guard arms all have wrist guards, which will help to hide the seam line. 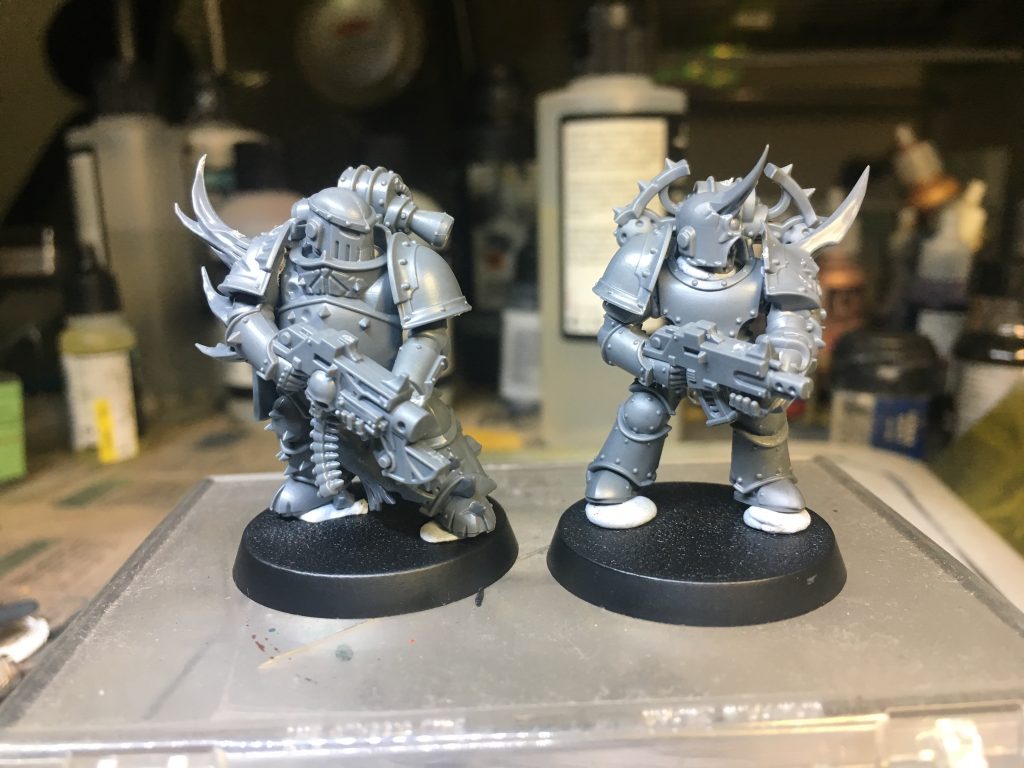 To prove a point, I did a quick blue-tack mockup with a MKIII and a Death Guard model. 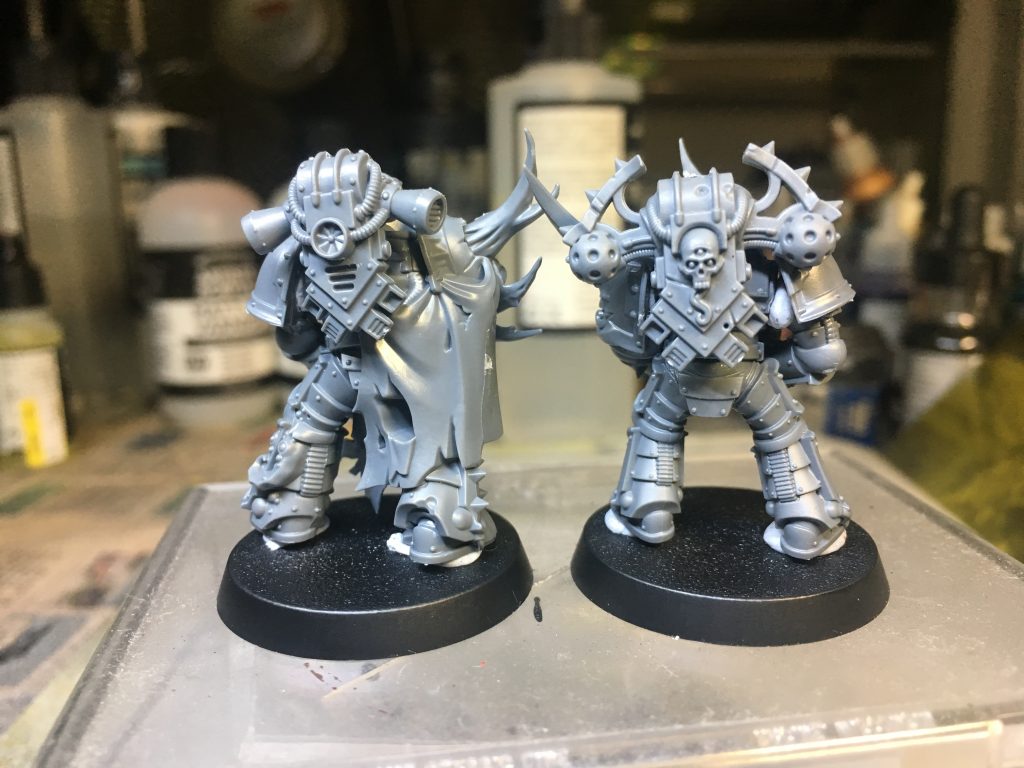 You can see that the heights of both models are pretty similar. The Death Guard bits (especially the torso and legs) definitely have a lot more girth than them MKIII ones, but I think that they look reasonably fine next to each other. The differences will probably disappear once you get paint on them and put them on the table top.

Considering all I did was a hand swap (no cutting of parts, shoulder pads, etc), I think that there definitely are opportunities for simple conversions and kitbashes in the Dark Imperium set. Not as much as I had hoped, but still pretty decent. 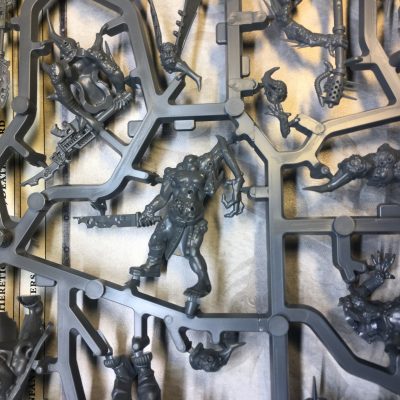 While the Poxwalkers are definitely great, and immensely detailed models, I’m not that big a fan of them. They have much fewer parts than either flavour of Space Marine, which shows in their relatively 2-dimensional, ‘flat’ poses. What kind of poxy zombie has their arm up like that?

I’m also not a fan of the ‘Joker Venom’ aesthetic of all their faces. Yeah I know Nurgle is the most ‘jovial’ of the Chaos gods, but I prefer my Nurgle of the ‘bio-horror’ variety (as some of you may know from my Dark Mechanicum… if you don’t I’ll show them shortly. They’re part of my Armies on Parade this year).

That being said, thankfully most of the heads on the Pox Walkers are separate. This means I could probably mix and match in Ad Mech and other heads. I’m looking at the AOS ghouls and maybe the Admech Rust Stalkers and infiltrators, although if I could get some good gas mask heads or eyeless, helmeted heads those would be great too.

I’m not sure if I’ll be able to convert the whole Death Guard squad any time soon (with other projects on my plate). But I’ll definitely post it up here if or when I do. 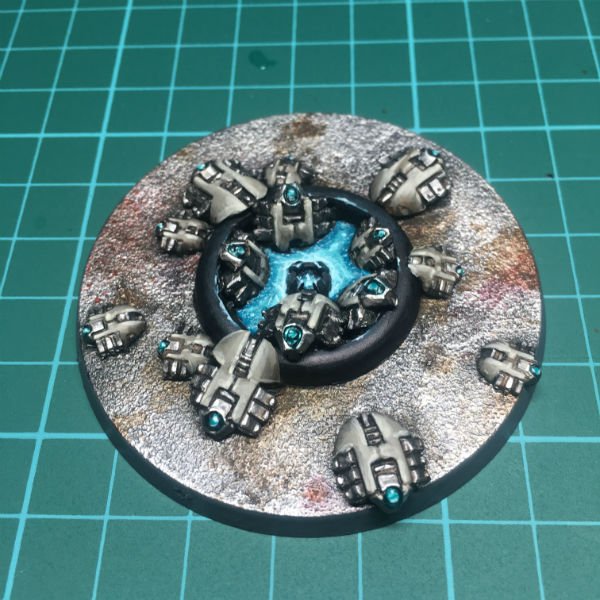