Apparently some guys have gotten Wrath shipped to them already, and are giving out spoilers for just about the entire Warmachine Wrath Book. These are consolidated spoilers for Warmachine Wrath from the Focus and Fury forums, GTM Magazine, and Bell of Lost souls. I tried to reword them to make them easier to understand, but the chinese whispers/broken telephone effect MAY be in place, so if you guys want it straight from the horse’s mouth (or in case they update with more spoilers) I recommend you guys check those out too.

Also, this doesn’t have any of the previously revealed spoilers, if you want those we’ve got an earlier post that takes care of your needs. 🙂

Having said that… SPOILERS HO! (I would say more than half of the book revealed under the cut).

11 June Update: Added Rocinante, Nicia, Eliminators, Minutemen, and a few more. Got more detailed wording on Ossyan’s feat. The F&F Boards are awesome.
13 June Update: Added Rover, Avenger, and added details for some. All entries in Wrath should be spoiled in some way or another now. Also, remember to take everything with as much salt as you can find. We’ll only know the full details when Wrath releases. :).

Thyra: Warcaster
6 Focus
Spells:   Carnage, Occultation, Pursuit, Silence of death, Stranglehold
Feat: Place her within 2″ of current position, and all others in control area activate and do the same.
Elite Cadre (daughters of the flame): Gain vengeance
Acrobatics
Overtake
2 Melee Attacks: Weapon Master

Do d3 Damage to itself to perform miracles:
1: stops all animi (and?) continuous effects on all models in command range
2: When a friendly model in command range is boxed: Model makes full advance and 1 normal attack. Model cannot be targeted by free strikes while doing so.
3: Enemies within 2″ suffer continuous fire and is pushed 4″ away. 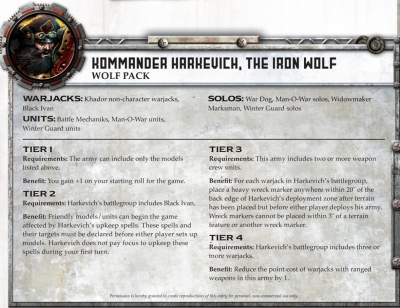 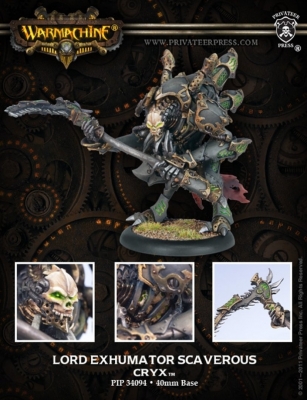 Iron lich overseer: Solo
Jack marshal, commander, terror, undead, circular vision, soul matrix, soul taker
Soul Matrix: While in this model’s command range during their activation, warjacks controlled by this model can spend soul tokens on this model to gain additional attacks or to boost attack or damage rolls at one token per attack or boost.
Magic (7): Cloak of darkness (Stealth to the Lich. Stealth to jacks he controls in B2B), dark fire
Staff: Magic weapon, reach

Weapons:
Weapon 1 has Dispel
Weapon 2 has Temporal distortion: Range 12, on hit place a 4″ aoe on (I think an enemy) model, stays for one round. AOE moves with that model. AOE causes -2 DEF. Model starting activation in AOE cannot run or charge.

Rover : Heavy Warjack
PC 8
Same stats at Nomad.
Has Axe, Shield Cannon, Shield
Shield Cannon is same range as a military rifle (I think) and POW equals Nomad’s fist.
Also has the Ability that Sea Dogs have to make a melee attack with its gun. 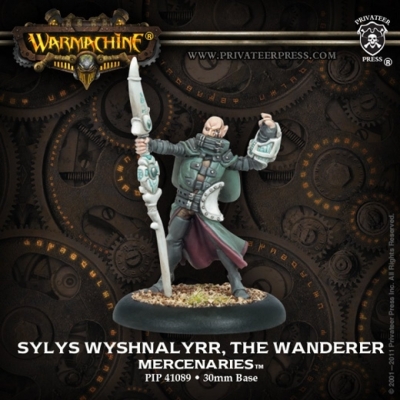 Mel's Muses: Flashpoint #2 and Fear Itself #3