I love Halloween. I think it’s my favourite holiday of the year. And it’s not even really a Singaporean holiday! But the GREAT thing is, it’s not just for geeks, dorks, cosplayers or people-who-wanna-dress-up-as-sexy-noun any more. 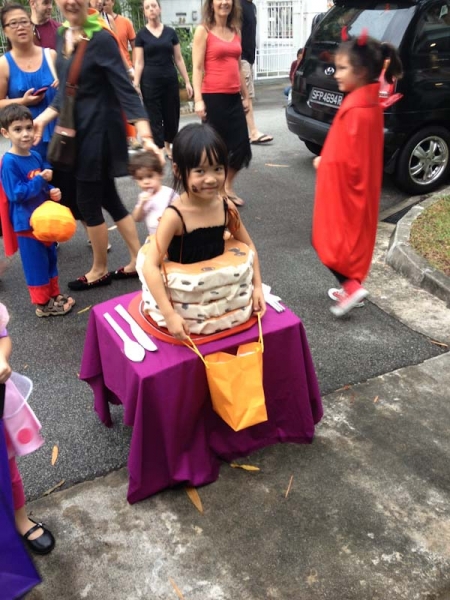 I’m not saying that I don’t want us geeks or cosplayers to dress up, but I don’t want to treat Halloween as an ‘us versus them’ competition. Halloween, while rooted in superstition, has become more like a day for the everyday kid (and everyday adult, and everyday parent) to indulge in a little fantasy and imagination. It’s cool if the cosplayer in you wants a really elaborate costume (and I’m all for elaborate costumes), but I want to celebrate the kid who painted a green cardboard box and came as a t-rex, or the guy who doesn’t really do costumes but is willing to ghetto something up to join in the fun! It’s about wanting to be in a costume, not just the costume itself. 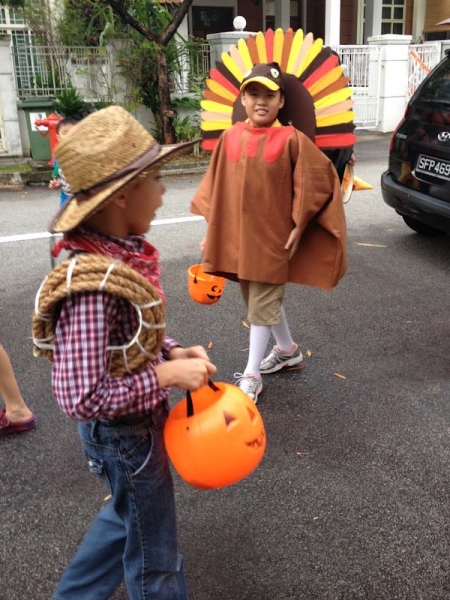 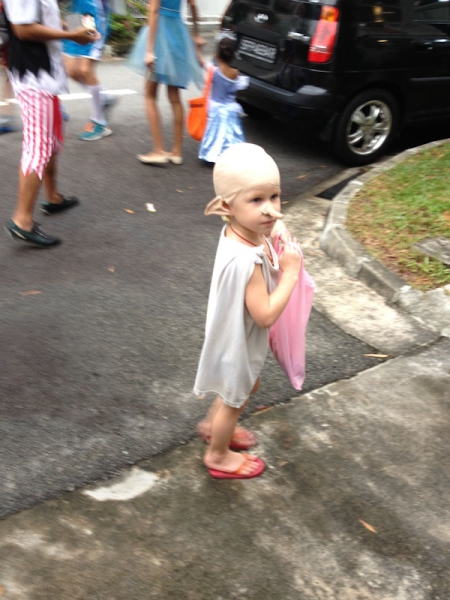 And because of that, I figure that’s how I should rate the top 5 costumes we saw this year: 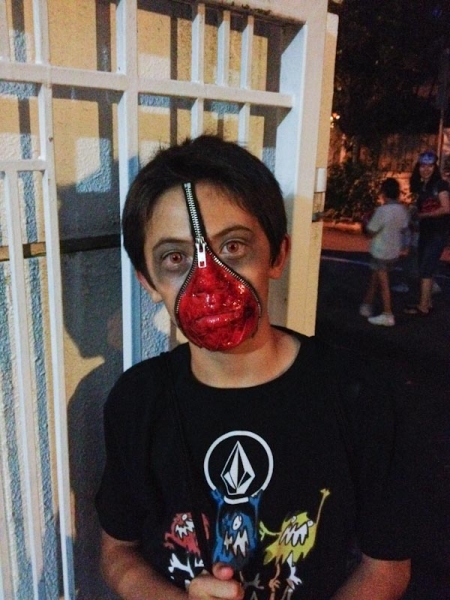 Creepy as HECK. Very well done costume. Apparently his mom helped out with the make up special effects, and I think that is awesome. Any parent who’s willing to spend time and make something that… moist… looking… gets props in my book. 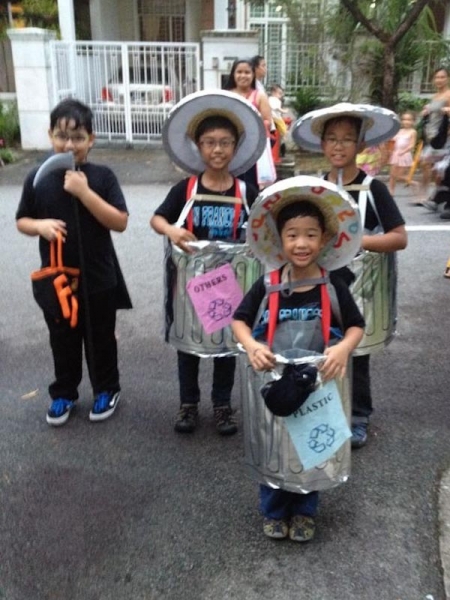 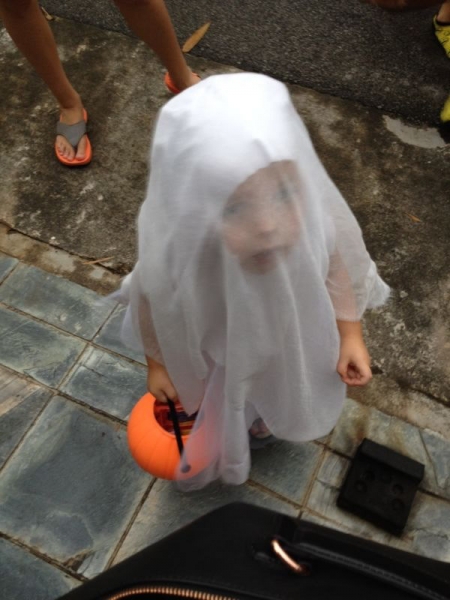 AwwwwwwwwWWWWWWwwww! Simplicity itself, but I think that’s part of why it’s so good. The other bit is just being adorably young. 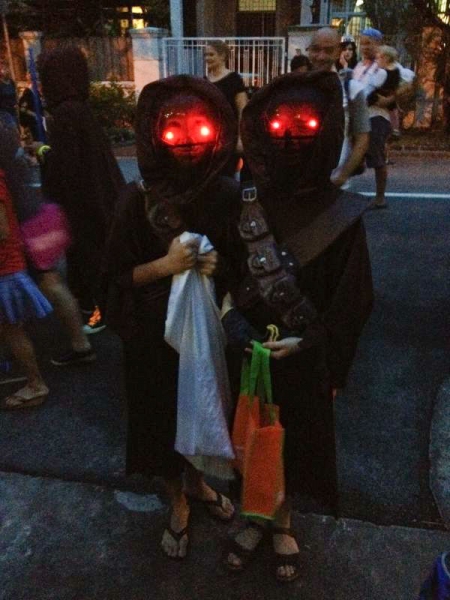 Jawas. JAWAS WITH LIGHT UP EYES! Take what I said about the recycling cans, and tack on what looks like really good costuming skills. It looks possible to make, but would’ve probably taken a lot of work. So mad props. And if it was rented… I want to know where I can get that (and why the 501st never got their hands on it. Unless they have and I never noticed and if that’s the case I’m sorry). 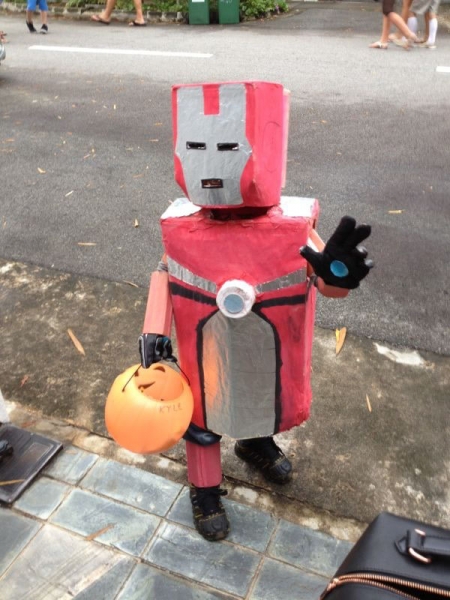 The creativity to look at a cardboard box and see a suit of armor. The diligence to paint it all up and STICK FOIL ON IT (I’ve tried sticking foil on stuff. It’s hard). I heard from his mom that he did all this by himself (maybe they helped out a bit but STILL). And… I thiiink he was Singaporean too. The fact that he was willing to do all this for just one day, gives me great hope for the future of this country. The little kid would make Tony Stark proud. I know he made me proud.

The parents (and adults) are putting in more and more effort in dressing up, and that’s amazing. Halloween is an inclusive holiday after all! The kids were really cute, but I’m glad that the adults joined in the festivities and didn’t mind being a kid again. 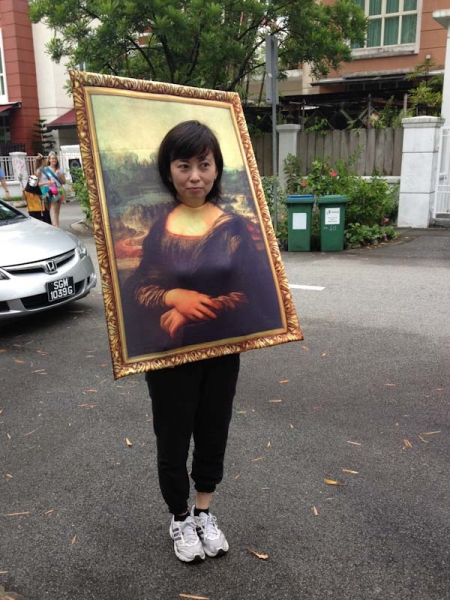 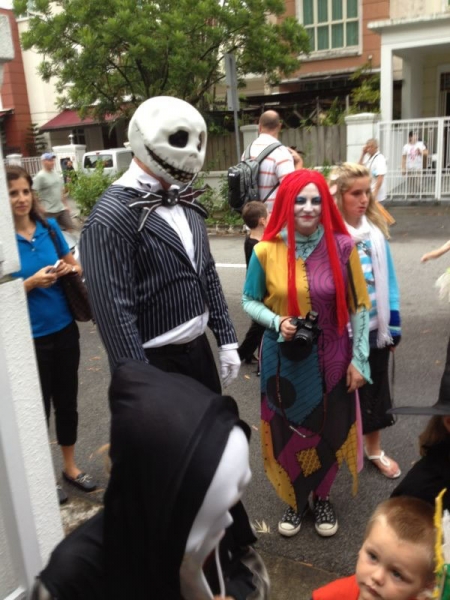 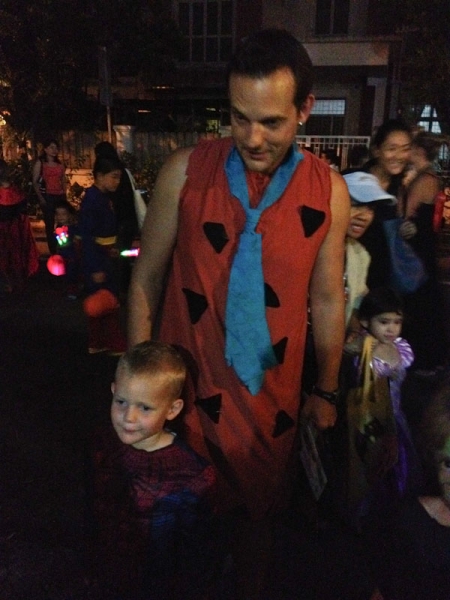 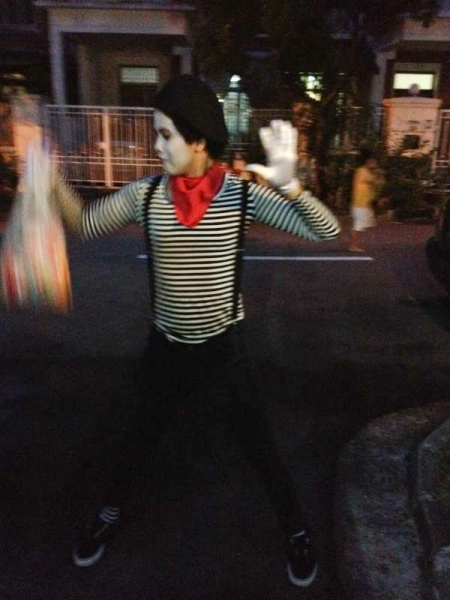 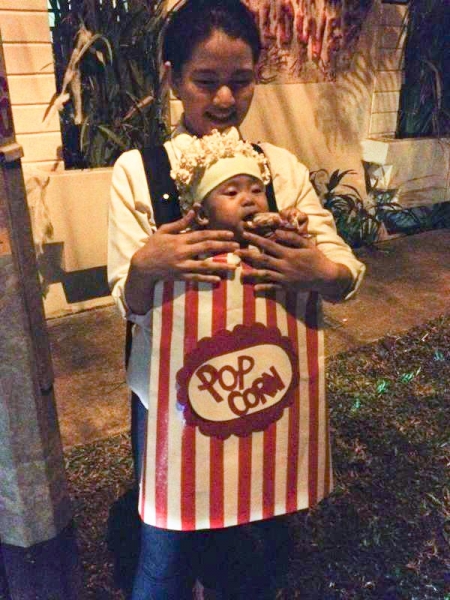 Even just taking your kids along for the ride. The fact that you guys are willing to spend the time, money and effort to let your kids have fun is super cool. 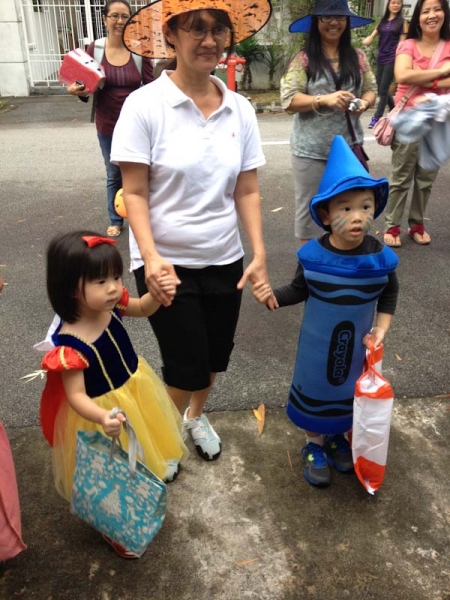 You know what’s not cool tho? Teens who think that ‘ugh Halloween is lame I’ll point and heckle and try to collect sweets anyway’. You guys don’t deserve candy. You’re all douchebags. 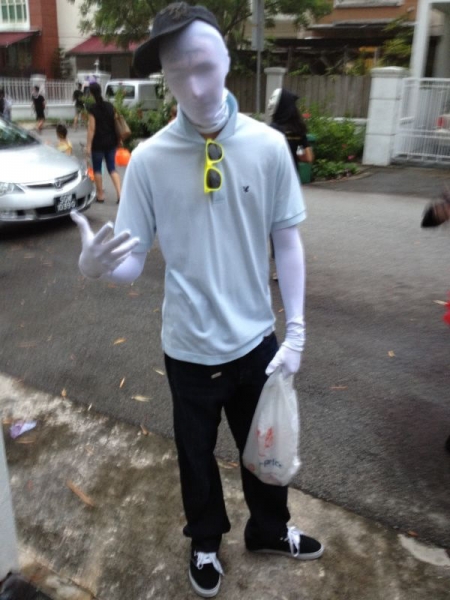 Not this kinda douchebag tho. He’s cool. He dressed up. But he needs more popped collars.

So dress up more, ok teens?

Honourable Mention 2: The Rise of the Geek

WE HAD IRON MAN. WE HAD JAWAS WITH LIGHT UP EYES. And lookit this Jedi, he’s so happy he has a lightsaber he’s not even bothering to jedi mind trick for more candy (we gave more anyway). 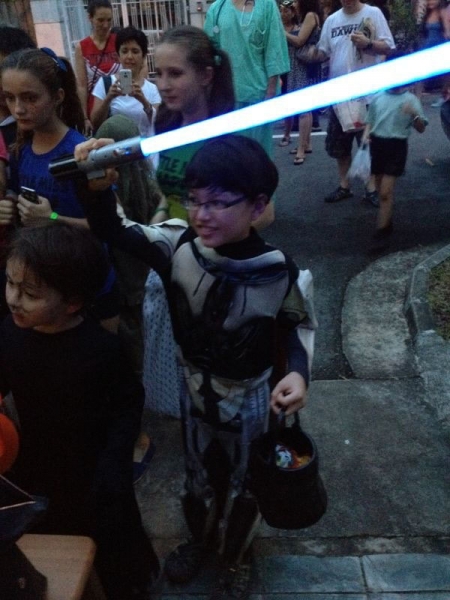 AND FINN! We actually saw quite a few Finns (iirc 3). Some even had Jake. This was the only one we took a shot of tho, which made me sad. But Singapore, we can do so much more! I expect Princess Bubblegum! BMO! Next year guys. 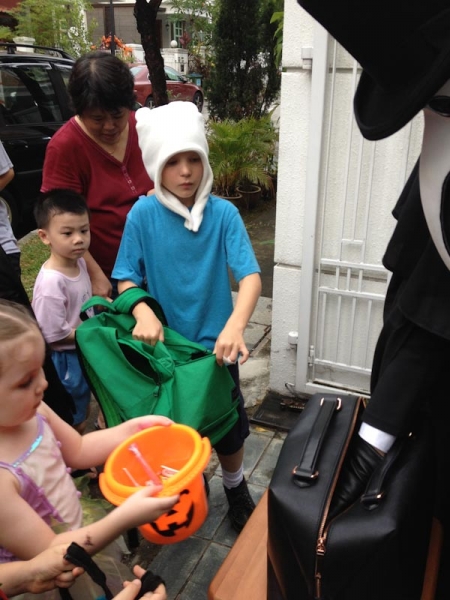 Seriously though, this one takes the cake in terms of awesomeness. I Really wanted to put them in the top 5. A parent-kid pairing that involves steampunk. STEAMPUNK I SAY. And the mom has some seriously hardcore goggles. So much awesome. 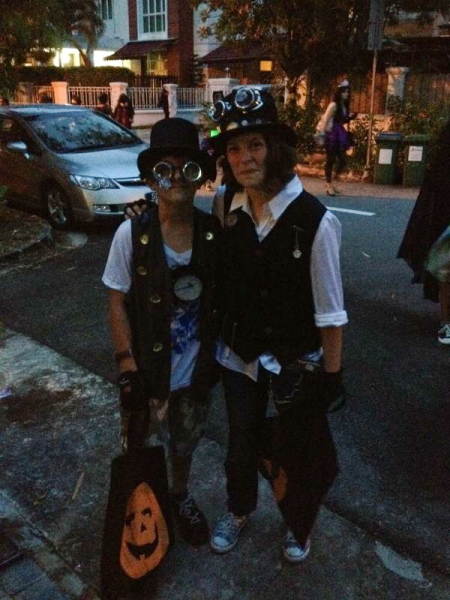 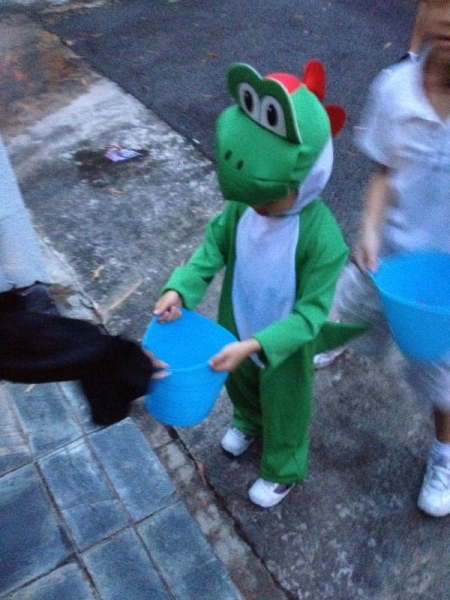 That’s not to say the rest aren’t good though. In fact, I myself was pretty blown away with all the costumes this year. A lot more people dressed up, a lot more people really put effort in their costumes. So happy. To those who don’t dress up tho… seriously guys! All I’m asking for is a little bit of thought and a little bit of dress up. And… maybe no more NTUC plastic bags? You guys can do it.

After all, these guys did! Take this picture dump as proof. (OMG So much cuteness) 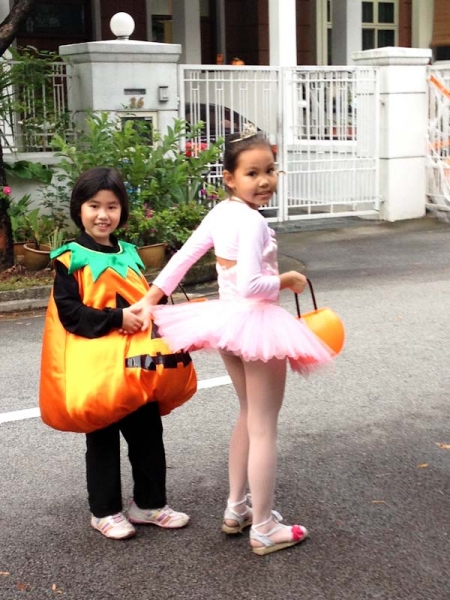 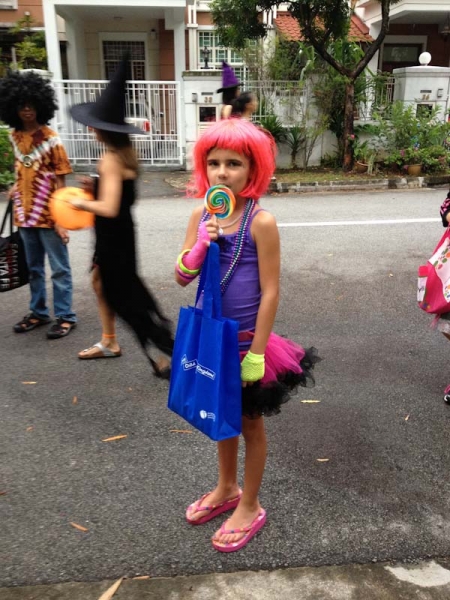 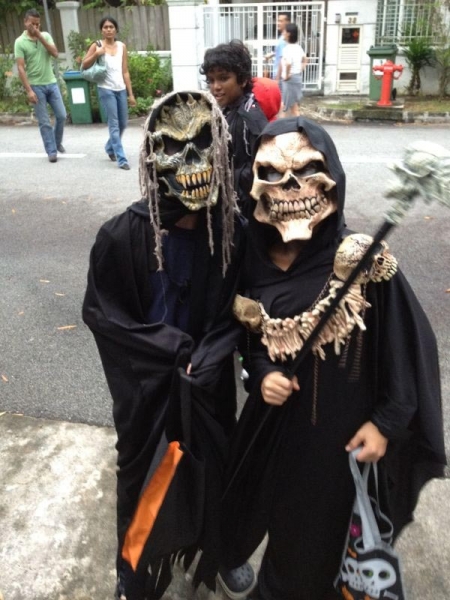 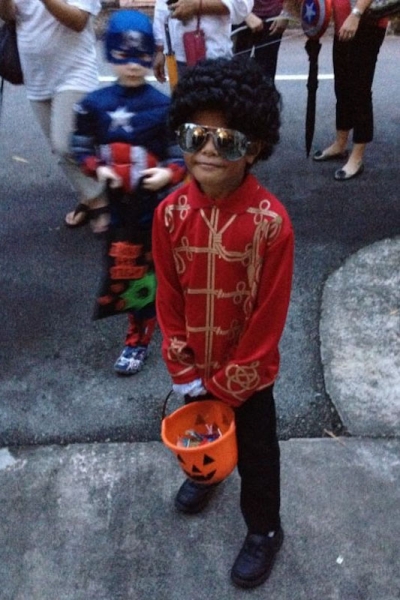 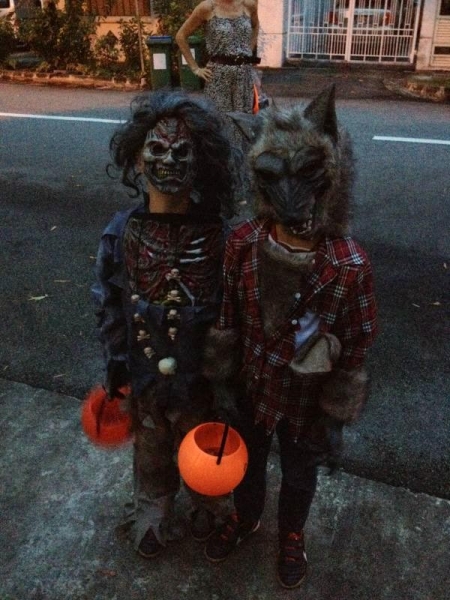 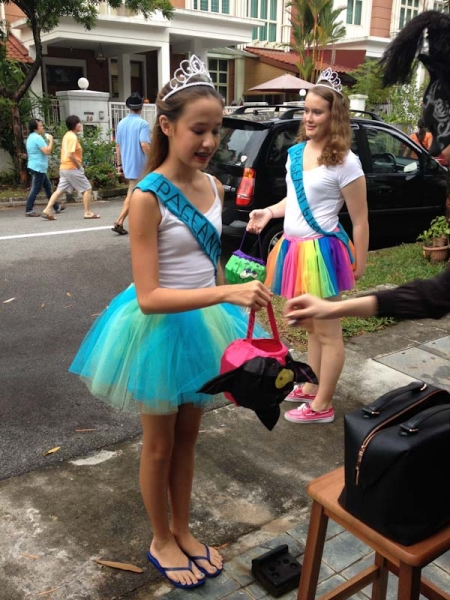 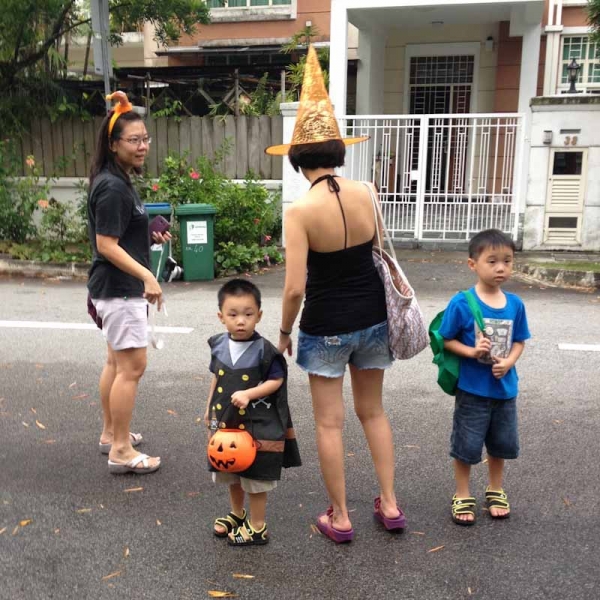 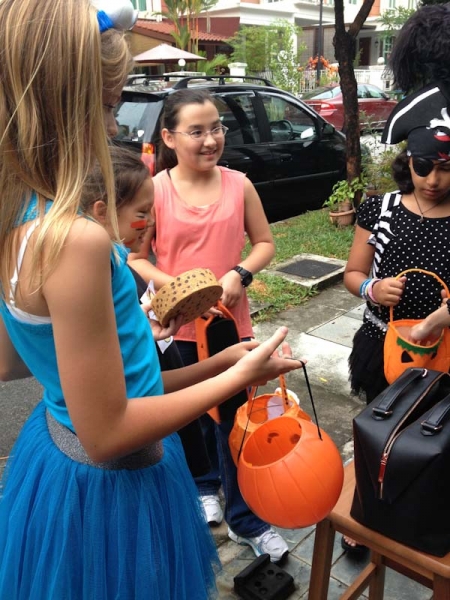 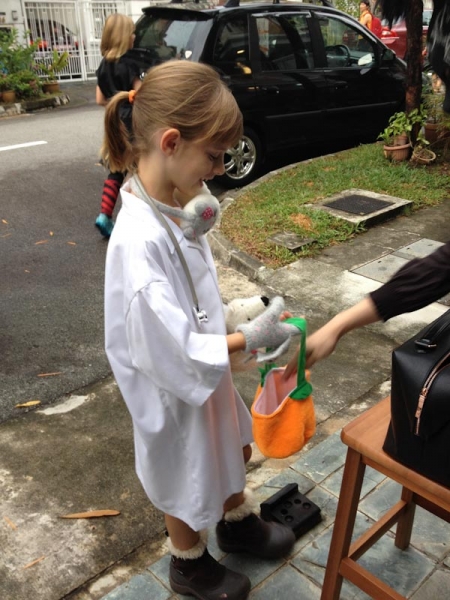