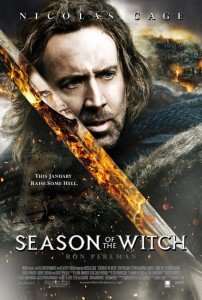 A reviewgitation of Season of the Witch with

We’re all familiar with the kind of vitriol directed at Nicholas Cage for his movies – for every Kick-Ass and Con Air there’s Next or his horribly inadequate toupee in Ghost Rider. All this, coming from an Oscar winner, for Leaving Las Vegas. All that aside, we’re being treated to another Nicholas Cage movie, so soon after The Sorcerer’s Apprentice – Nicholas Cage, the gift that keeps on giving. We scored some preview tickets – so no point letting the sweet deal go to waste!

Going in, maybe I did set the bar as low as possible. I’d already witnessed the so-bad-it-can’t-even-be-good Next so I really thought there was no where for Nicholas Cage to go but up. On the other hand, seeing that the Tomato rating was 5% fresh (right before I watched the movie, and it’s 5% fresh, not 5% overall), putting it below Little Fockers (10%) and Yogi Bear (12%) really made me rethink such a stance. I know the 5% was based on early previews, so maybe there’s a strong chance they gave out tickets to only people who hated Nicholas Cage. Still, if that’s as good as it could muster maybe it would make Next seem like the intelligent work of art it so, so yearned to be. 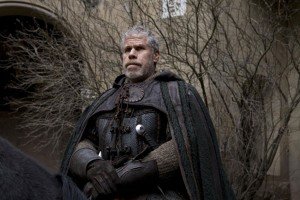 We start off with a series of witch-trials as a prologue. A few minutes after that we cut to the main character Behmen (Nicholas Cage) and his right hand man Felson (Ron Perlman) in a crusage-montage spanning roughly 15 years. Why? Apparently that’s how someone gets angsty. They finally get sick of the crusades and desert, only to be captured and forced to perform one last duty as absolution for their crimes of desertion: bring a girl suspected of witchcraft to a monastery, where the monks will decide their fate. And it’s only then when the movie really starts proper.

Thankfully enough, Season of the Witch ended up being pretty watchable, marred only by the wishy-washiness in the first half of the movie.

Undoubtedly so – I think Season of the Witch just really didn’t know what it wanted to be. It started as a sort of horror thing, before moving on to being a buddy cop show / war epic, and then taking a turn to be a… tragic war story, then becoming a mystery whodunnit of sorts – finally settling on being Van Helsing 2. But confusion aside, what remains is a pretty passable tale of… stuff happening to Nicholas Cage, and definitely does not deserve a 5% rating on Rotten Tomatoes.

Barring the first half hour where it wanted to be a funny and gritty war epic at the same time, Season of the Witch did improve once it got its bearings (which would probably be medieval horror/action). I understand that the first bit was to achieve some sort of pathos for Cage’s character Behmen, but I’m sure that they could have streamlined it by finding a better way. Especially since the method in the movie was fight fight fight ANGST. 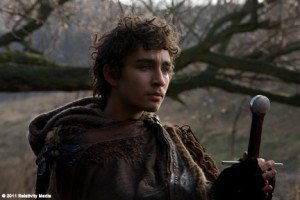 This is not a show you’re meant to nitpick – after all halfway through the show certain things become so obvious that one wonders what Behman was even thinking (my main grouse), and the little twist at the end was shocking mostly because they decided not to allude to it till after it had occured. With Nicholas Cage doing his best to be serious (after the almost promising buddy cop bits) you’re always close to falling into Ghost Rider territory. Couple that with the criminally underused Ron Perlman and Robert Sheehan (of Misfits fame) always so very close to make us giggle uncontrollably as we imagine him as Nathan instead of the young knight Kay. Not to say he did a bad job of course – it’s just that Robert just has that bit of Nathan engrained into him now. The rest of the cast isn’t much to shout about – I guess Stephen Campbell Moore did a pretty good job as Debelzaq, and if you’re interested in Claire Foy maybe there’s some eye candy for you. Christopher Lee? Blink and you’d miss him.

They did quite a good job of helping the movie along though. Robert Sheehan’s Kay was the very model of a naive altar boy believing in the nobility and glory of the Knights, and together with Ron Perlman as the polar opposite (the cynical and almost criminal veteran of the crusades Felson) were enjoyable to watch, and their scenes with Cage were probably the ones I enjoyed the most. I’d have loved to see more of them (even though the two of them were already featured pretty heavily).

I wish they had given Christopher Lee more to work with though. It’s sad that he’s essentially delegated to cameo in this movie. 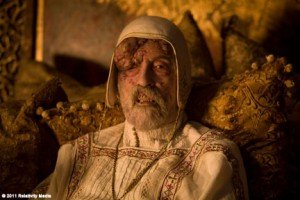 I did like how they had the plague doctors costume done right – which is not asking for much, but still, it was a nice touch. They did try to ground it in history, right in the middle of the crusades and the plague, so at least they tried to do some things right.

The effects of the movie weren’t much to look at either. Practical effects such as costume design and prostheses for the plague victims were very good (I did grimace quite a few times when faced with the plague), but CG effects which took up most of the last 15 minutes of the movie could definitely have been better.

I think all the tension that they tried to maintain (part of the horror part of the show, or maybe a thriller part, who knows?) got a bit deflated when the CGI came on. It’s not horrible CGI, but since we’re in the age of shows like Tron – well, try a little harder, maybe? The bad animation could also have been a way of showing an otherworldly side to everything, but it’s more likely just smacks of bad motion capture or lazy computer use. The voice for the animated character could also have done with a bit of work – it’s as if it had a totally different accent – possibly the point (otherworldliness and all), but it sounded more perfunctory than something that was properly cast.

And a thing about the blood – thanks to the colour palette you don’t see much red at all, but more telling is how little bleeding there is even in the midst of pus and pestilence, probably to shoehorn the show into a PG rating (and still not getting it in the US). What that means is a show promising horror and gore… not having much of the gore bit at least (also, not much horror, but that’s another story). 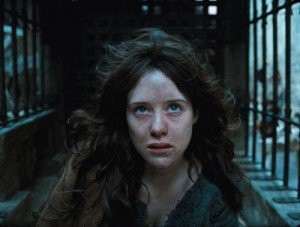 Season of the Witch was decent, but ‘good enough for a Nicholas Cage movie’ doesn’t exactly seem to be a very glowing review. The plot may have been a bit wonky (especially at the front), but Nicholas Cage puts up a respectable (if a tad overwrought) show, and Robert Sheehan and Ron Perlman save the movie for me. If you’ve ever wanted to be grossed out by medieval horror, then check it out. 5.5/10.

In the end, Season of the Witch isn’t as bad as they make it out to be, but it could have done with just some decision making as to what it really wanted to be. There is pastiche, and there is this overflowing taco shell which is Season of the Witch. I guess it does make for a pretty fun show if you’re bored over the weekend, so I’ll give it a very generous 6.5/10 since I actually did enjoy it after all. Definitely one show that’s more than the sum of its parts – one could definitely conjure up tons of (silly) reasons as to why it did what it did.