Merry Christmas everybody! Hope you all got all the geeky goodies you wanted by the time you are reading this. There are just so many terrific titles that are worth at least a shout-out before the year ends. So let’s get started with the musings and as always, there be spoilers ahead. 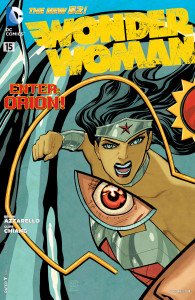 Wonder Women #15. At last, the one and only Orion of the New Gods makes his full appearance here and I like it a lot. Now this might sound strange but I’m liking it is cos I really have no idea where writer Brian Azzarello is taking this amazing story. Sure DC has linked Jack Kirby’s New Gods to the old Greek gods before but with the New 52 universe, I’m not sure if repeating all that would be a good idea. I want to see something, pardon the pun, new.

The story so far is after finding out that Zeus is her real father, Wonder Woman or Diana finds herself caught up in an ancient Greek soap opera of sorts with the rest of the remaining Greek gods. In this latest issue, we got Diana and her half-brother Lennox looking for her kidnaped baby half-sister. To do that, they need the help of Milan, their reluctant other half-brother. I’m sure by now you got the idea what Zeus did for fun. So with a hot-tempered Orion covering Milan’s back, you can bet there’ll be fireworks.

Major props too to a couple of the subplots like the mystery villain in Antarctica and the almost comedic relationship between Zeus’ wife, Hera and the other woman, Zola.  Once again, I have no idea where these subplots are headed but they still draw you in and they certainly propel the story towards a fresh direction.

As for Cliff Chiang’s art, I honestly can’t think of a better or more suitable artist right now. With such a radical new Wonder Woman origin, Chiang’s uniquely clean, sharp yet slightly cartoony style seemed perfect for the title. The art here really makes the whole storytelling experience so much more enriching. This is an exciting issue and it doesn’t disappoint at all. 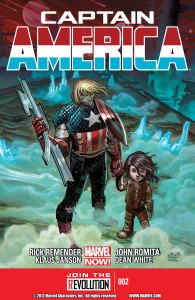 Captain America #2. Speaking of Jack Kirby, there’s more of his influence right here in the latest issue of Captain America by writer Rick Remender and artist John Romita, with the legendary Klaus Janson on inks.

As a longtime fan of Kirby’s work, there were lots of elements in the story that I found entertaining. A bearded Cap is trapped in Dimension Z after fighting his old nemesis (and I dare say one of the coolest-looking villains of all time) Armin Zola and rescuing an infant child. Now the only beef I have with the story was Remender saying that Cap was lost there for a year. A whole year?!? I don’t see the point of that other than to show that Cap’s a total badass for being able to survive in the “desolate wastelands of Dimension Z” all by himself while taking care of a kid. You know they are not going to have the rest of the Marvel Universe looking for him, as he’s already showing up in all the other titles like Avengers every month.

But like I said, that’s the only thing that kinda threw me off this issue. Remender did what he does best and similar to what he did so brilliantly with Uncanny X-Force, he took Cap out of his comfort zone and dropped him in a totally new environment. Gone are the urban settings and storylines right out of today’s headlines. This is like Cap going back to the trippy 1970s when Jack ‘the King’ Kirby was writing and drawing the title. I still remember how those old issues blew my little mind away with bizarre bad guys like Armin Zola, the Night Flyer, the Swine and the Mad Bomb.

Trekking across the alien landscape, Cap is besieged by countless waves of monstrous creatures. And here’s where Romita’s art nailed it. From the hard-hitting action scenes to the creatures, they all share a bit of that distinctive Kirby art style but still overlaid with Romita’s unique treatment. It all comes together rather beautifully. Definitely a title worth picking up even if it’s just to see Cap with a beard. 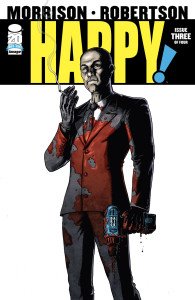 Happy #3. Come on, you didn’t really think I’ll miss looking at a Christmas-y title this week, did you? Well, the closest and most enjoyable one this year has got to be Image Comics’ Happy by writer Grant Morrison and artist Darick Robertson.

Now if you read this or the other first two issues, you’ll probably be forgiven if you thought it was that other Brit, Garth Ennis writing this 4-issue mini-series instead of Morrison, cos this is one freakin’ bloody violent book! It’s about Nick Hansen who was a good cop turned bad cop who’s now trying to set things right while fighting off various hit men, other bad cops and a serial killer. And he’s doing all that with the help of Happy, an imaginary (or not?) flying blue unicorn.

Oh yah, and the Christmas part of all this, is that the carnage is taking place during the Yuletide season kinda like the first Lethal Weapon and Die Hard movies. My all-time favorite Christmas holiday movies by the way, but I digress.

So if you are in the mood for a bloody good Christmas title this holiday season, go get the first three issues of Happy.